Professional of the Month: Stephanie Drake

Posted By: TechNation Development Teamon: July 01, 2022In: Magazine, Professional of the Month, Spotlight 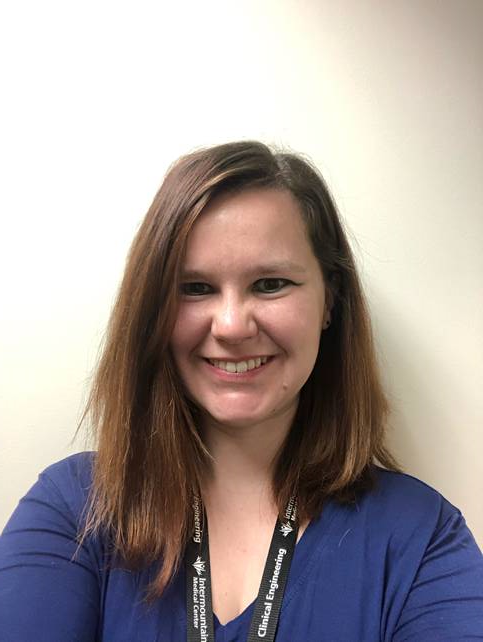 Not everyone who considers providing veterinarian care to horses ends up as a biomed, but biomeds often take an indirect path to the profession.

Some start out intent on taking the clinician route and end up as HTM professionals.

Both were the case with Stephanie Drake, clinical engineering manager with Intermountain Medical Center and TOSH facilities at Intermountain Healthcare IMC/TOSH in Murray, Utah.

Drake didn’t know much about biomed at the start of her journey and considers it a fluke that she found biomed.

“I wanted to be an equine veterinarian, then joined the Army in 2008 hoping to become a Combat Medic (68W), but there were none available at the time,” she says.

A recruiter she spoke with was a biomed (68A) and pointed her in that direction.

“I had no idea what I was getting myself into, yet I caught on well, particularly when it came to the hands-on portions of the training. I do not believe I would have done as well as a combat medic as I have as a biomed, both in and out of the military,” Drake says.

Training came by way of the military and then more hands-on experience overseas.

“I attended the military’s biomed program at Sheppard AFB in Wichita Falls, Texas from 2008-2009. It was 10 months of both book and hands-on learning from a Gomco suction unit to closet-sized sterilizers,” Drake says.

Shortly after completing that program, she got married and was informed that her unit was slated for deployment to Afghanistan.

“That started a six-month process of additional training on devices such as would be used in the lab or imaging,” Drake says.

Drake’s HTM journey continued in the civilian world after her time in the military.

“I was in the Army Reserve as a biomed and reached sergeant (E5) prior to my contract ending. I joined Intermountain Healthcare in August 2012 as a clinical engineer. I serviced the medical group clinics for three years. I transferred to the LDS Hospital, and with my five years there, I reached tech III and team lead before accepting the clinical engineering manager position for the Intermountain Medical Center and TOSH facilities in December 2020,” she says.

“In my most recent role as manager, I have had less time with equipment. I specialize in promoting my team’s development and growth,” she says.

During the pandemic, Drake and her team were called upon to coordinate and quickly expand bed capacity.

“In the summer of 2020, we came upon the need to quickly expand our ICU capacity at the LDS hospital. This involved pulling and storing equipment from those previously occupying the floors and commandeering extra patient beds to fill each room,” she says.

The project required a push for a patient monitor upgrade in another facility in the system so that the old monitors could fill these rooms. This project required Drake to do research to purchase consumables (cuffs, hoses and finger probes) that could be delivered within a week.

“Some of these rooms had to go live with patients before we could install the central monitoring and nurse call system. Nursing had extra sitters available as well as bells in each room. My team escalated the need for each install and was able to get them in with coordination between the vendor and nursing staff to work around and move patients between rooms,” Drake says.

Away from her role as a CE manager, Drake enjoys reading and video games when there is time.

“For both, I enjoy fantasy with good story lines that I can lose myself in,” she says.

She also enjoys staying active, which includes going to the gym and yard work.

“More mowing the lawn than weeding. I like being up and moving about,” Drake says.

At home, she enjoys time with her husband of 12 years and three children from one to six-years-old.

“When the opportunity arises, I will take home devices apart to try to fix or even just replace the power cord on my dryer. Teaching my kids what the different tools are called, and what they can be used for,” she says.

Despite initially thinking she would be healing horses, Drake ended up in her perfect vocation.

“I love what I do, both as a tech and as a manager. Even though I ended up in the field by happenstance, I have the mechanical mindset and ability to work with people to do the job and to do it well. Being able to solve problems with machines and people is satisfying work and I get to be called a wizard. The moments that the end-users see how we affect their work, and the appreciation they show, is one of the things that keeps me coming back to the problems,” she says.

Drake says that the work that she does would not be nearly as good if not for her husband.

“He takes the time to listen to my day and provides amazing insight into what the results could be depending on the direction I choose to go. He also reminds me when it is time to set my work aside and come home. If not for him, I would be a much worse workaholic,” she says.

People skills and a mechanical mindset allow this CE manager to check all the boxes while enjoying her work.