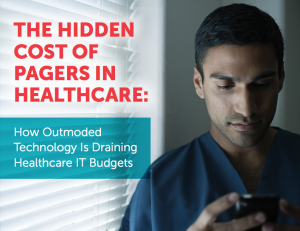 A new study sponsored by TigerText and utilizing research conducted by HIMSS Analytics and other industry research, revealed how significantly U.S. hospitals are overpaying to maintain legacy paging services. The HIMSS Analytics research in which 200 hospitals were surveyed, revealed that 90 percent of these organization still use pagers and on average spend around $180,000 per year.

“This research uncovered that a significant number of hospitals still rely on pagers as a cost of doing business. ‘Legacy technology’ can be difficult to replace despite that more advanced technology is available,” said Bryan Fiekers, Director, Advisory Services Group for HIMSS Analytics.

This in-depth study, titled “The Hidden Cost of Pagers in Healthcare,” included research from HIMSS Analytics and other market research. The HIMSS Analytics research found that the average paging service cost per device was $9.19 per month, compared to industry research showing the cost of secure messaging app alternatives to be less than $5 per month.

HIMSS Analytics research revealed significant “soft” costs from the continued use of pagers, including:

“Nothing would make me happier than to move away from pagers,” said one CIO at a leading university hospital who participated in the study. “At one time, pagers were more convenient, before people had their cellphones on them all the times; however, there are significant challenges with not using updated technology, such as not having a centralized directory, contacts and call schedules. I think people are going to be happy to shed a device and instead walk around with a device that is theirs and that they already rely upon every day. I think we are in a transition state.”

“We are dedicated to transforming health care communication to help doctors, nurses and other health care workers to deliver the best patient care possible,” said Brad Brooks, CEO and co-founder of TigerText. “This survey illuminates why the health care industry should leave their pagers behind. We now know paging technology is not only a hindrance to sharing data and collaborating around a patient’s case, but also extremely costly to U.S. hospitals.”