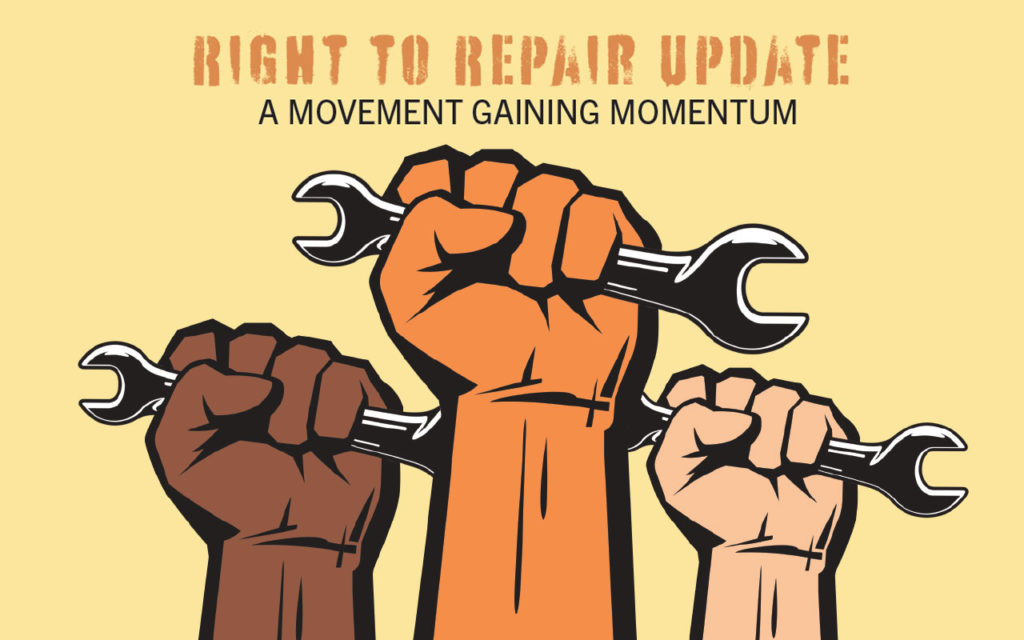 The last thing that biomeds need during an international pandemic is to have their hands tied. After valiant efforts to stand up hundreds of COVID-19 surge units, follow many additional protocols and face illness at home, HTM professionals are as exhausted as their clinical colleagues.

Making their jobs harder to do is just wrongheaded.

That was the central message of an opinion piece that was featured on MarketWatch.com in May of 2020. The article was co-authored by Kevin O’Reilly of U.S. PIRG and Leticia Reynolds, president of the Colorado Association of Biomedical Equipment Technicians (CABMET).

The right to repair activism effort has gained steam during the pandemic. HTM professionals like Reynolds have recognized that the frustration of having inadequate servicing documentation, service keys and test equipment, has been compounded by the pandemic.

The tide may be slowly turning.

While several bills have been pending in a number of state legislatures, there has been some momentum at the federal level recently.

For many in the larger right to repair movement, the issue isn’t only about making repairs more accessible, but also about keeping electronic waste out of landfills.

That concern may be one of many for biomeds, but hampering their ability to make repairs unobstructed, especially when conditions make the availability of an OEM field service engineer more challenging, is a big concern

TechNation previously addressed the availability, or limited availability, of online repair manuals and the FDA perspective. At that time, there was pending legislation in 22 states that addressed the concerns of farmers, backyard mechanics and consumers, as well as those in the HTM community.

In California, a valiant effort by local HTM professionals moved a bill very close to the goal line. Nobody can give the biomeds there anything less than an “A” for effort and persistence. With the help of a state legislator, the concern was exposed to the entire California legislative body.

In Denmark, workshops are held where people with a talent for doing repairs as non-professionals, offer their skills to the public. The volunteer repairers ask for contributions to cover the cost of coffee. This is grass-roots activism, but for local residents it’s just a way to keep electronic devices they like.

The European Union recently passed new rules requiring manufacturers to ensure that spare parts are readily available for up to 10 years after a product is brought to market. Appliances are required to allow for dismantling using conventional tools.

Regulations in the United States continue to make slow, but steady progress.

“I think overall this last year or so there have been significant strides in the right to repair movement. I know that not everything has to do with the medical equipment field, but every step forward is a step in the right direction. There have been states across the country that have put forth some right to repair legislation which has been amazing. The U.S. Copyright Office removing some of the repair restrictions was also a huge move forward,” says Reynolds.

She says that she is hopeful that these small changes and movement forward can help dispel the argument that these changes will cause a decrease in patient safety; that just isn’t the case.

On October 27, 2021, the U.S. Copyright Office submitted its “new exemptions to Section 1201 of the Digital Millennium Copyright Act.”

The latest exemption modifies an exemption from 2015, granting access to medical device data and adding wording to cover devices that aren’t implanted and allowing patients to grant authorization to third parties.

The momentum has been building in recent years with more focus being brought to legislators at the state and federal levels. Thanks to the efforts of groups like The Repair Association and U.S. PIRG, advocacy for HTM professionals and other interested stakeholders are being represented.

“We had legislation under consideration in 27 states in 2021 – more than half the nation by any measure. Several of the bills included everything with a chip – which is our main intent. A variety of bills were filed that were specific to a particular category of equipment – such as farm and ranch equipment, home appliances, mobile devices and hospital equipment,” says Gay Gordon-Byrne, executive director of The Repair Association.

She says that the biggest change for everyone was the Federal Trade Commission (FTC) report released in May of last year titled “Nixing the Fix: An FTC Report to Congress on Repair Restrictions”.

“The president then included right to repair in his list of pro-competitive rules he’s asked the administration to adopt, and the FTC rapidly voted as a commission to work on making new rules. The rule-making process is lengthy and not always applicable to right to repair and the FTC has been very clear that state legislation is the most practical way of guaranteeing consumers their legal rights,” Gordon-Byrne says.

“Please read at least the executive summary and note that the FTC has evaluated all claims of danger, cybersecurity risk and privacy risk to consumers and found ‘scant evidence’ of support for the claims. The FTC states specifically in the body of the report that these problems also exist with medical equipment. Staff of the FTC has helped Congressman Joe Morelle (D-NY) with review of his right to repair bill and also helped our bill sponsors in state legislatures with polishing the language of our bills,” Gordon-Byrne says.

She adds that the FTC has encouraged all of our sponsors to include medical equipment.

“Several bills more recently filed – Illinois, Pennsylvania, Delaware – have included medical and are encouraged by the report. As more bills are filed and refiled or amended, we see increasing interest in making sure that medical equipment is also included,” Gordon-Byrne says.

She says that California worked hard on a medical equipment bill under Senator Susan Eggman, and progressed through two committees before being put down by the third.

While there has been some progress at the federal level, activists in several states have been busy bringing this issue to the attention of local legislators to enact change at the state level.

“Arkansas filed and passed a bill directed specifically at repair of hospital equipment and passed it rapidly through their state senate before AdvaMed even knew there was something afoot. Opposition focused on the house and made enough confusion to kill the bill in 2021. The lobbyist group that managed the work was not hired by us but informed us of the details. We do not know if they plan to refile in 2022 or if the rules in Arkansas prevent another attempt until 2023,” Gordon-Byrne says.

She says that Colorado fought a particularly painful battle for right to repair including medical equipment and got the full attention of the disability rights community.

“Kevin O’Reilly believes there might be a new effort focused on wheelchairs and other assistive devices in 2022,” Gordon-Byrne says.

She says that New York passed Digital Fair Repair through its Senate in June, and the matching bill in the assembly needs to be brought for a vote in 2022.

“We expect the bill to be formally amended and get through consumer protection committees and to the floor in both bodies and presented for signature by the governor before end of session in June. The current version of the bill still exempts medical equipment,” Gordon-Byrne adds.

The focus on medical devices in the California effort should be of special interest to the HTM community.

“As Gay mentioned, our effort to pass Sen. Susan Eggman’s California Medical Device Right to Repair Act last year built momentum that we haven’t yet seen in the space. I worked with a group of talented biomeds, clinical engineers and HTMs who were fed up with manufacturer’s unnecessary and harmful repair restrictions, which they have been dealing with for years,” says Kevin O’Reilly, right to repair campaign director with U.S. PIRG.

He says that the group brought the facts and stories of restrictions that were limiting hospitals’ ability to fix machines needed to save patient’s lives – particularly during the pandemic – to leadership in hospitals across the state and members of the state legislature.

“That work convinced several major hospital networks and the California Hospital Association to endorse the bill, helping the bill to advance within one step of the state senate floor. Though our side’s arguments were able to overcome the intense opposition from industry groups in its first two committees, the industry’s lobbying power and influence led to the bill being killed in a back-room part of the legislative process,” O’Reilly says.

O’Reilly says that it was frustrating to watch that bill go down in that fashion after they had clearly won the argument in committee.

“But no right to repair bill of any kind had gained the traction that ours did. It’s a testament to the leadership of Sen. Eggman and the HTM professionals who made sure that decision-makers heard their story. If biomeds across the country continue to recruit their hospital leadership to support right to repair, I’m confident we can win this fight,” he says.

The U.S. Constitution was written to vest more power at the local level and empower local citizens. For that reason, efforts at the state level reflect the interests of state residents and allows for local activism and participation in the process.

“With a new legislative session kicking off in states across the country, there’s a lot of hope that biomeds can continue to push forward in the crucial effort to eliminate manufacturer repair monopolies. Right to repair bills that include medical equipment are already active in both Pennsylvania and Illinois. More are sure to come as the states move forward,” O’Reilly says.

Your Voices Must be Heard

The clarion cry for reforms in right to repair will require the efforts of organizations like O’Reilly’s and Gordon-Byrnes’. But, it must be bolstered by the efforts of those in the HTM community to continue the momentum and effect real change.

O’Reilly says that medical device manufacturers often argue that only they should service equipment because only they are regulated by the FDA.

“This is true, but that is by design. Hospitals and ISOs have to meet rigorous reporting and procedural regulations implemented by the Joint Commission, the Center for Medicare and Medicaid Services and more. The idea that non-manufacturer repair is not regulated is hogwash,” he says.

Gordon-Byrne asks that we continue to publish the efforts made in favor of right to repair and reminds readers that they are the best resource for advocacy in support of medical right to repair for legislators.

“Even where a state bill is not currently afoot – bringing the need for legislation to every legislator is how bills get started and moved. Contact the chair of the committee and the leadership of the state hospital association. Between the BMETS and the hospitals, the legislature can educate legislators on how repairs are done and debunk AdvaMed and MITA,” she says.

O’ Reilly says that it’s crazy to think that a patient might be denied life-saving care simply because a biomed’s polo doesn’t have the manufacturer logo on it.

“Biomeds working for HDOs and ISOs are just as qualified, if not more qualified, to provide high-quality, safe and effective service. The FDA told us so in their 2018 third-party servicing report. It also told us that ‘the continued availability of third-party entities to service and repair medical devices is critical to the functioning of the U.S. health care system.’ We need to put repair tools in qualified biomeds’ hands, and we need to do it now,” he concludes.