The Future: What’s in a Name?

Posted By: Roger Bowleson: May 01, 2018In: Expert Advice, Magazine, The Future
Print Email 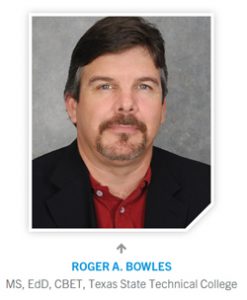 John Noblitt’s recent article really hit home with me. His point about stress being either enhancing or debilitating has been so true in my case, especially over the last few months. Change is indeed inevitable and sometimes what is needed is a change in the way one thinks about change.

Texas State Technical College has undergone many changes over the past year. We have merged into one college with campuses across the state instead of multiple campuses with multiple presidents and multiple curricula. This means the Biomedical Equipment Technology department is the same at the Waco campus as it is at the Harlingen campus. Now, in past few months, campus administrators have started to address faculty ranking.

But after thinking about it, I am convinced that a faculty ranking system at a two-year technical college is probably a bad idea anyway. Maybe it is a bad idea in any educational system. After all, do students really care about titles? In an article titled “Instructor or Professor, It’s Not Your Title But What You Do That’s Important,” on facultyfocus.com, Errol Craig Sull points out that students react to attitude and teaching ability, not titles.

Researching some of the titles used in academia, I realized that our college had long ago adopted the antiquated university titles with the exception of “lecturer.” Twenty years ago, those titles were associated with pay raises at our school so naturally people worked for those titles to get more money. I did, it was the only way to get a raise. And in some respects, after earning the doctorate, the professor title had a good ring to it and probably went to my head a little. But in retrospect, calling someone who trains students to be technicians “professor” sounds a bit silly and overinflated.

As many of you know, I also teach people how to ride motorcycles. That is my side job and now a side business. It is a passion and I would probably do it for free (but I do need money to pay for sunscreen). After six years and many certifications in basic and advanced courses, as well as different curricula, it would still totally embarrass me if someone called me a professor of motorcycle training. An instructor teaches someone how to learn or improve in a particular skill or sport. That is the title that fits best in motorcycle training. It also works well for other types of instruction such as how to fly, how to ski, and how to repair a vehicle. In my opinion, it fits pretty well at describing anyone who teaches another person skills to perform in technical jobs.

One of the things that was drilled into us as new motorcycle instructors was that our job was to help students learn how to ride and not show them or tell them how good we can ride. Instructors in general can boast about accomplishments and post fancy diplomas on their wall, but it doesn’t make them good instructors. Titles and accomplishments buy instructors very few minutes of respect, if any. It is the instructor who genuinely cares about the students’ achievements that commands the most respect and admiration.

The bottom line is that I would rather have the title of instructor or trainer than professor because it matches what I do and what I love doing. As of now, we do not know what the new titles will be when the administration unveils its plan, however, I do know what will be on my nameplate on my desk.