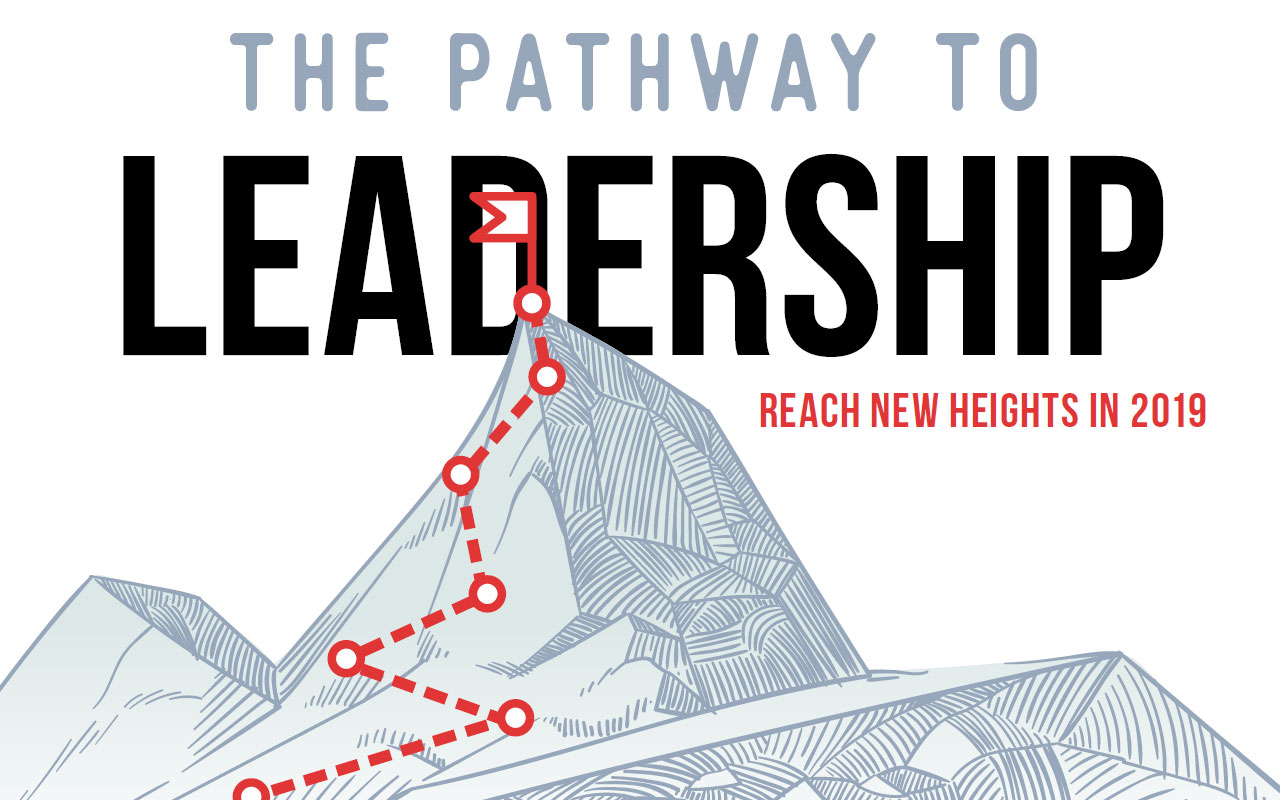 The Pathway to Leadership: Reach New Heights in 2019

Every year, people with the best of intentions make plans for the coming year, and then they throw in the towel early. At least, that is what the statistics suggest in many studies. They plan to spend more time with family, or get a better job, or buy their dream car or get more sleep, and somewhere along the line, they get distracted.

Sometime around new year, the local news will invariably run a story about the leading New Year’s resolutions and what percentage of people actually achieve that promise to themselves. The weight loss and working out resolution explains why health clubs continuously sell memberships; most people give up within six months.

The irony is that achieving goals is usually in a person’s best interests. Attaining goals is the difference between the most successful people and those who just dream about better things. The fact is that many people set their eyes on a target in the new year and then lose their direction, get lost in the process or forget about the goal and move on to something else.

Without a roadmap, a written set of instructions or a well-constructed plan, the opportunity to achieve goals and accomplish projects is fruitless and frustrating.

Motivational speaker Greg Reid once said; “A dream written down with a date becomes a goal, a goal broken down into steps becomes a plan, a plan backed by action makes your dreams come true.” Bringing dreams to reality requires setting goals, writing them down with concise steps and accomplishing each step. That allows you to achieve your dreams.

In the same way that weight loss requires a number of systematic steps and lifestyle changes, taking on work-related projects requires a methodical approach. While it’s possible to dive into a project head-first and hope the stars align and things fall into place, the likelihood of success is marginalized. Projects require a plan.

This holds true for the HTM department, where projects present themselves from time to time. Some of the key elements for the project manager to consider are to identify the phases of the project, identify the participants and stakeholders who can make it happen, and understand the budget process and its role in the project.

As is the case with goal-setting, a project requires that a number of goals and timelines are identified. The project leader must also identify what tasks need to be completed and which team member is responsible for that task? What will the completion of each task require from a budgetary perspective and what timeline will be assigned to each task?

All stakeholders must agree on the project’s scope, methodologies, expectations and deliverables. Keep good documentation of all those who buy into every phase of the project in case of future disputes. As with all goals, break up the big tasks into manageable segments.

With many of the changes implemented in hospitals in recent years, and increased use of sophisticated technology, the need for managing projects has become greater than ever before.

“The past several years, I cannot think of a week where we were not working on a project, let alone multiple projects,” says Doug Dreps, MBA, director of eastern regional operations, healthcare technology management for Mercy Health.

“Integration of vitals into electronic medical records and images into PACs is ever increasing and makes up for 30 percent of my team’s time. Any technology that is new, and we plan to put on our IT network, must go through a new technology process. Part of this process is a manufacturer passing our cybersecurity,” he says.

Dreps says that his team is working on over 20 new technology projects with more being added monthly.

“Some of these projects, for on-boarding equipment and clearance to connect to our network, can take up to six months for clearance. Dealing with Windows XP and now Windows 7 obsolescence are other projects that, in the past with non-networked devices, we were not concerned,” Dreps adds.

“I know some organizations have made positions for project manager(s) to be part of the healthcare technology department. We are looking at adding some of these positions. I made myself part of the Mercy Project Team, just so I could list a project if needed, so our IT co-workers could log time against it,” he says.

Dreps explains that a simple but proven effective process he instituted was hanging a 3’ x 5’ white board with 15 slots to list all the projects that are ongoing.

“This is an in-your-face reminder to make sure something does not fall off my radar. Often, we wait on others for information, so a project could go stagnant for a while. It has proven to me to be effective and I highly recommend it for a New Year’s resolution,” Dreps says.

Developing a plan to tackle and complete a project in the HTM department requires methodical planning and precise execution, just like projects anywhere else. Knowing the phases of a project provide an outline for ushering it to completion.

“Project management principles are as relevant in the HTM space as they are in any other profession. One cannot gauge the success of an implementation without establishing a thorough project plan and tracking time and costs. With the growing HTM/IT dependencies, the nature of projects is becoming more complex, which in turn benefits from approaching projects in a structured manner,” says Ali Youssef, PMP CPHIMS CWNE #133, principal mobility architect in the information technology department at Henry Ford Health System in Detroit.

Youssef holds the PMP certification, which is considered the gold standard for project management professionals

Youssef says that the project initiation process group is perhaps the most critical. This is where the project charter is identified, and the overall idea of the project is scrutinized and is shown to be feasible and valid.

“The project charter serves as the foundation for authorizing the project. In addition, the project scope is documented during the initialization process. The planning process involves redefining objectives in more depth and ensuring that all of the appropriate stakeholders are included or at least made aware of the project,” he says.

He says that planning entails creating a detailed work breakdown structure to ensure that each task is subdivided into measurable deliverables. Perhaps more importantly, planning also involves developing a schedule and a budget for the project as well as a risk plan.

“Once the project planning package is completed and signed off on, project execution kicks off. Project execution involves coordinating people and resources to complete the steps outlined during the planning process. This includes building the project team and ensuring that they have the appropriate skills. Project stakeholders need to be kept abreast and up to date during the execution process,” Youssef says.

Then, there is the process of executing the project. Youssef says that issues generally arise during project execution, and this gives rise to monitoring and controlling activities.

“This group consists of processes performed to identify potential issues and implement corrective action. Scope creep often occurs in projects and being able to identify and correct it is a major part of project monitoring and control. Ultimately, the goal is to ensure that the project is on track from a timing as well as a budgeting standpoint,” he says.

Youssef says that closing out a project properly ensures that administrative and contractual procedures are followed. In addition, it is paramount to receive formal project acceptance signoff and to address the ongoing maintenance needs for the project effort.

“Identifying the appropriate stakeholders is crucial to the success of a project. Equally important is the notion of identifying an executive sponsor and champion. If key stakeholders are not included, this can result in unnecessary delays and potentially a halt to the project. For example, if a new patient monitoring platform is selected for use in a hospital, without input from nursing, they may not be willing to use the new technology until they are comfortable with it which could take some time,” he says.

Finally, he says that the project budgeting framework can be divided into three areas; namely cost estimating, cost budgeting, and cost control.

“Cost estimating involves approximating the cost of hardware, software, and resources to complete the project. Cost budgeting is a more in depth breakdown of the costs of individual activities in the project plan. Cost control includes monitoring cost performance to identify and understand variances from the baseline costs,” Youssef says.

While there are some very methodical steps to take when tackling a project in the HTM department, the same logical or disciplined thinking can be brought to capital purchases.

“Medical device acquisition planning will be one of the dominant issues of the next decade,” says Stephen L. Grimes, FACCE, FHIMSS, FAIMBE, managing partner and principal consultant at Strategic Healthcare Technology Associates LLC in Swampscott, Massachusetts.

“Organizations must adopt a strategic approach. They should not acquire and deploy significant or substantially new healthcare technologies without first giving appropriate consideration to the strategic, clinical, safety, operational, and financial implications of that acquisition,” Grimes says.

He says that health care organizations have come to depend on technology as a key member of the hospital team and their ability to deliver care is severely compromised when that technology is not ready and available.

Grimes says that the prevalence and sophistication of the technology requires health care organizations to focus on acquiring the most appropriate technology for the patient care services they provide and the environment in which they provide them.

“Access to more capable technology comes at both a financial cost and increased risk. Costs (product of quantity and average unit cost) of deployed medical devices are growing making up a substantial portion of the increase in U.S. health care costs,” Grimes says.

He says that the risks include compromise to technologies on which providers have become increasingly dependent and the acquisition of costly technologies that do not fully meet needs (leading to underutilized or abandoned devices).

“Health care organizations must look to become more strategic in their technology acquisitions. They need to recognize that new acquisitions now go into a connected environment where the typical medical device no longer operates in isolation but more often must connect and work well with other technology systems,” Grimes says.

He says that corresponding to their impact on patient care, their level of technical integration, and their need for support, the deployment of many new healthcare technologies can easily have a ripple effect on a wide range of an organization’s clinical, support, and business operations.

“They must adopt processes that involves acquisition and deployment planning, integration and subsequent evaluation of the effectiveness of those processes to ensure the right decisions are being made for the right reasons,” Grimes adds.

In 2019, when the opportunity to undertake a project, big or small, presents itself, you will be ready. Through careful goal setting and the steps outlined by a certified PMP, the road to implementation and successful completion will be an easier one.

The same goes for acquisition planning. With any project, the best approach involves having a plan and working it. Entering any project or acquisition without a clearly defined strategy can lead to disaster. Planning with a structured set of steps and goals will spell success.