By Patrick Flaherty and Joe Haduch 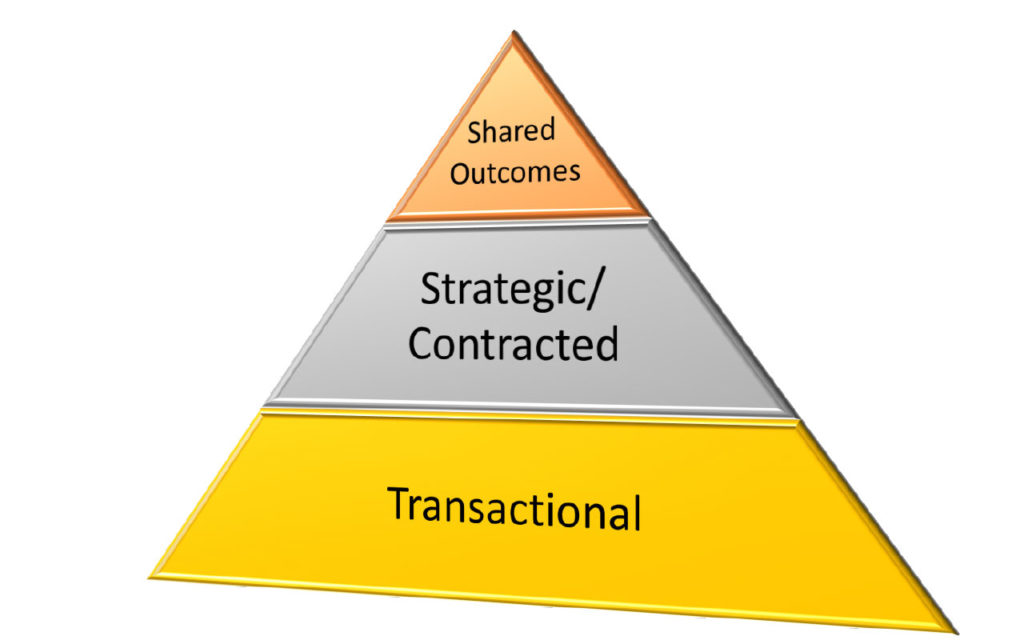 Where is your supplier on the pyramid? Where should they be?

It’s as overused as any word in health care. It’s become so overused that those who strive to achieve and define it, primarily suppliers, often preface the use of it by saying something along the lines of “I know it’s cliché but I really think our company would be the perfect partner for your organization.” Those of us involved in the purchase or evaluation of medical equipment have all heard it. It’s not the word itself that has become trite or “cliché,” but rather the lopsided meaning of the word. A partnership evokes the very best of relationships, much like the Beatles or Simon & Garfunkel during the mid-sixties, not the ugly break-ups and accusations of inequality or disproportionate contribution which quickly followed.

Simon & Garfunkel are a good example for us to use as a segue into our health care problem with the concept of partnership. Very few people would find anything negative to say about the quality of the music produced by Simon & Garfunkel in their prime … inventive melodies and rhythms, poetic lyrics, and finely wrought harmonies with Mr. Garfunkel’s high range prominently on display; problem is Mr. Garfunkel wrote nothing and primarily executed the vision of another while being paid like a partner. When Mr. Simon balked at this and strove for a more proportional representation of contribution, the “partnership” crumbled. The problem was the division of benefits was not perceived to be correctly divided amongst the parties and certainly not connected to the variable contributions of the parties. Health care is in this situation … manufacturers perceive the partnership to be like Simon & Garfunkel post the release of “Bridge over Troubled Water.” The manufacturers are Paul Simon in this scenario, taking the vast majority of the financial rewards, and providers are Art Garfunkel, possessors of a killer falsetto and a diminished bank account.

In health care, the definition of a “partner” has various meanings to various people. To some it’s as simple as “you give me money, I give you product hence, we are partners.” To others, it’s a supposed strategic relationship defined by volumes of contracts and a myriad of addendums, but nothing relative to better outcomes, more efficient workflows or improved financial impact. However a true partnership, not unlike a successful marriage or long-term friendship, is based on equality, reciprocal support and, most importantly, a willingness to subrogate one’s needs when the other’s requirements are more critical. Is this the type of “partnership” your organization has with any of your suppliers or does it more closely resemble the two former examples?

Suppliers have continuously promoted partnerships that do not come close to what most of us expect or would define as a true partnership. It is easier to objectively evaluate the presence or absence of partnerships as health care converts to a profit-and-loss business by examining the sustainable operating margins of the involved parties; while there is clearly a compelling inequivalence between providers and their suppliers in this dimension, it does not prevent suppliers from using the “p” word with alarming frequency. To be clear, providers who have paid 100% of the expanded access and risk of the ACA, who have seen billions of their revenue placed at risk related to quality, and who increasingly subsidize the costs of care for those who cannot pay for it, balk at the cavalier and twisted way in which suppliers, who have done nothing to cover ACA and who continue to blithely operate without transparency or warranty, use the term “partner.”

Examples of this perverted interpretation of partner are found in “volume discounts” or “discounted upgrades.”

A partnership, in its truest sense, isn’t based on the degree of profit for one entity but rather the ability of the other entity to reasonably meet its primary business goals in a sustainable manner. It is symbiotic, it is collaborative, it is equal in its opportunity for success and for failure. It is not one organization reducing its profit from 45% to 40% while my “partner” struggles to squeeze out a profit above two percent.

So, what role does HTM play in re-aligning the partner paradigm? You may feel that your supply chain group or purchasing team owns the supplier relationship. In most instances this is true, however, progressive HTM departments can help define a true partnership by identifying opportunities of shared benefit. Parts pricing based on the OEM production cost of the part, not an arbitrary list price, dictated by suppliers is a good place to start. Defined margins instead of defined discounts will prove a supplier’s true commitment to partnership. Their ability to drive a reasonable and consistent margin while enhancing their customers’ bottom line is in the long-term interest of everyone. In addition, HTM teams will need to work with clinicians to identify opportunities for value based on OEM equipment functional claims. We can no longer survive in a business model where manufacturers of clinical medical equipment and devices, most if not all of which have yet to complete their first double blind trial to establish objective benefits, drive exponentially more operating margin than providers. Suppliers need to share in the benefit when their products drive efficiency, increase margins and improve outcomes. Conversely, they need to share the pain when these products fail to deliver as promised. This is not the model we currently have. This is not a partnership.

Products need to become long-term annuities for suppliers, not a single transactional profit. Suppliers can no longer just drop off a product on your loading dock, and walk away without any interest in product use, implementation, security, value or outcome. Sustainable profit needs to be derived over the life of the product as it delivers increased value and higher quality. A “system upgrade” now goes from being an expense to a revenue generator based on an increase in product value. Now suppliers and providers both benefit from this enhancement over the life of the equipment opposed to a supplier collecting a one-time profit without any interest in the derived outcome.

Though some of you may believe the possibility of creating a true partnership with your primary suppliers is akin to finding a leprechaun galloping on a unicorn, the ability of health care to continue to support the current model of capital acquisition is equally laughable. Suppliers and providers need to develop true partnership opportunities based on delivered value not utopian ideals. HTM will need to be at the table helping to identify those opportunities, develop performance-based service models and bring the true definition of Partner, with a capital “P,” back to health care.

Patrick Flaherty is the vice president of operations for UPMC BioTronics.