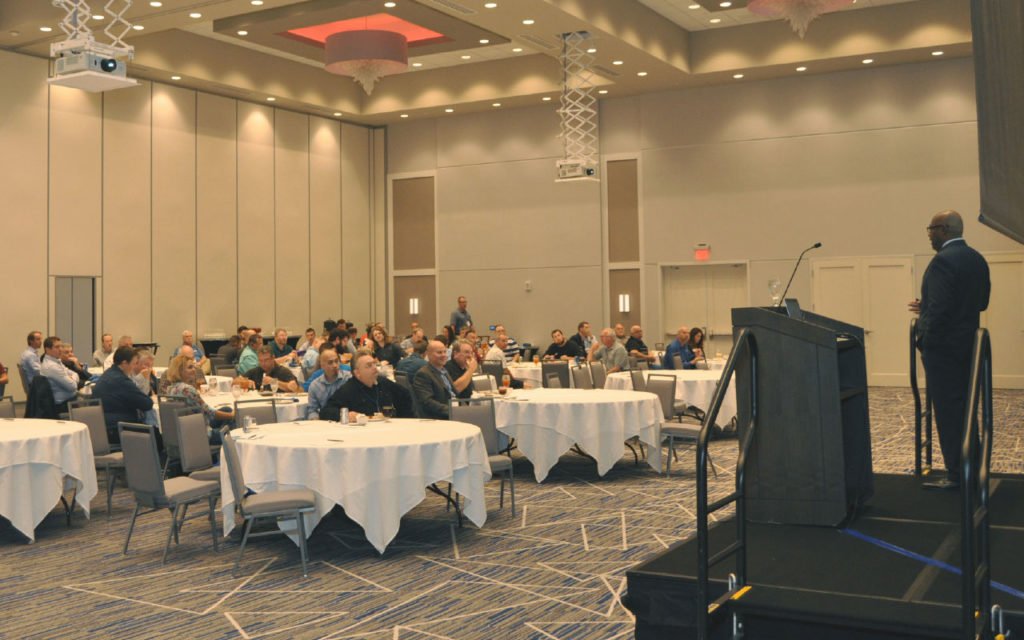 It’s not easy running a biomed association while a pandemic dictates what can and can’t happen. Many of the things that can’t happen are very important activities on an associations’ annual calendar.

Like companies and other organizations, a shift to virtual or online meetings and collaborations becomes the only practical alternative.

No part of the country has been exempted from this shift in protocols; including the Midwest.

The leadership of the Healthcare Technology Management Association of the Midwest (HTMA-MW) had to deal with this challenge during much of 2020. They had to cancel meetings and their symposium.

The HTMA-MW describes itself as “a professional society for BMETs in Kansas and Missouri.” The two states, which share a common border, are literally in the center of the country. You don’t get any more “middle-America.”

A chance meeting of several biomeds served as the impetus for the group’s formation.

“Sometime in the early 1980s, a few Kansas City biomeds; Larry Chapman, Dean Christ, Ted Brockman and Warren Lillygren ended up at the same training class at one of the area hospitals and decided to form a group,” says former-President Chris Coleman.

Coleman says that the group started as the Kansas City Biomed Society; which was officially recognized by the state governments of Kansas and Missouri and is now the HTMA-MW.

The relationship between local biomed associations and biomed training programs has become more important than ever as the field needs to assure replacements for retiring biomeds are in the pipeline. 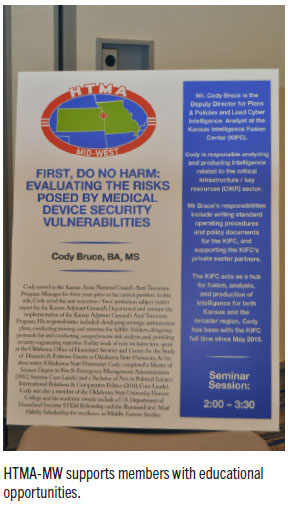 HTMA-MW members have taken steps to accomplish this important measure by working with colleges within their states.

“We’re happy that that idea has become a reality as Missouri State Tech College has accepted three in-seat classes at Johnson County Community College that are required for the BMET Certificate Program. Johnson County Community College (JCCC) has also accepted A and P, medical terminology and job search strategies as electives to the electronics technology AAS degree. Two of the other three classes required for the certificate program are done on-line through Missouri State Tech College and the last requirement is the internship,” Allen says.

He says that the program works like this; students would enroll in JCCC’s Electronics Technology Program and upon completion of the basic electronics technology requirements, students dual enroll at State Tech and to begin anatomy and physiology, medical terminology and job search strategies classes in-seat at JCCC, followed by biomedical instrumentation and diagnostic imaging online, then followed by the three-month internship at one of the local hospitals.

“We are now focusing on job shadowing programs when COVID cases decline and we can get back to a more normal way of doing things,” Allen says.

Allen adds that the association is in its third year of an agreement to provide scholarships for students that are in the biomed associate degree program with Missouri State Tech.

Virtual Meetings and a Special Event

Many annual symposiums were put on hold in 2020. These events often allow association members from more distant locations to rub elbows. The HTMA-MW symposium was no exception and had to be cancelled. This year, there are plans for a special event.

“We typically have a two-day symposium and with education sessions with approved CEUs, so attendees can earn credits for recertification. We typically have around 30 vendors which is how we are able to fund the cost of the symposium,” Allen says.

He says that they have great vendor support, including many vendors from other states, and many OEM vendors with a combination of local and out of state attendees.

“Our vendor support is amazing and we are blessed with their support,” Allen says.

He says that attendees come from Kansas, Missouri, Nebraska, Oklahoma and Texas.

“We have many different speakers such as Herman McKenzie with The Joint Commission, Danielle McGeary from AAMI, Matt Baretich and Frank Painter. Our symposiums are always filled with education, excitement, plenty of food and drinks, lots of fun and many free prizes,” Allen adds.

While the symposium provides an annual event for membership, the group also hosts meetings that allow board members to meet as well. The association has had to adapt to the requirements of mitigation this past year.

“We have six meetings per year and the board meets six times per year. We recently started Webex meetings because of COVID numbers increasing in the Kansas City area. We had a couple of issues in the beginning with these types of meetings, but are starting to become more successful at them. I believe they will be a great way for us to keep meeting safely,” Allen says.

He says that the group also normally has a local vendor-sponsored outing at a park or baseball game.

“This is a great time for our members to get together and have a relaxing good time,” Allen says.

HTMA-MW has teamed up with MD Publishing for a special event in September.

“This year, we are planning a HTM Mixer. Tim Cordes has been working with John Krieg of MD Publishing to schedule this in the fall of this year. We are planning on Heartland Biomed Association out of Nebraska and Gateway Biomed Society out of St. Louis being part of the HTM Mixer,” Allen says.

The HTM Mixer will be held September 9 and 10 at the Kansas City Marriott Downtown. Free registration is available for hospital employees, students and active members of the military. For more information, visit HTMMixer.com.

He says that the group also provides money for members to go on mission trips.

“We have members apply for this and we give away up to $750 each to help cover the costs of these mission trips,” Allen adds.

The effort to nurture and expand the HTM community is alive and well in the middle of the country. Despite some challenges last year, the HTMA-MW is finding ways to keep in touch and continue its valuable work.