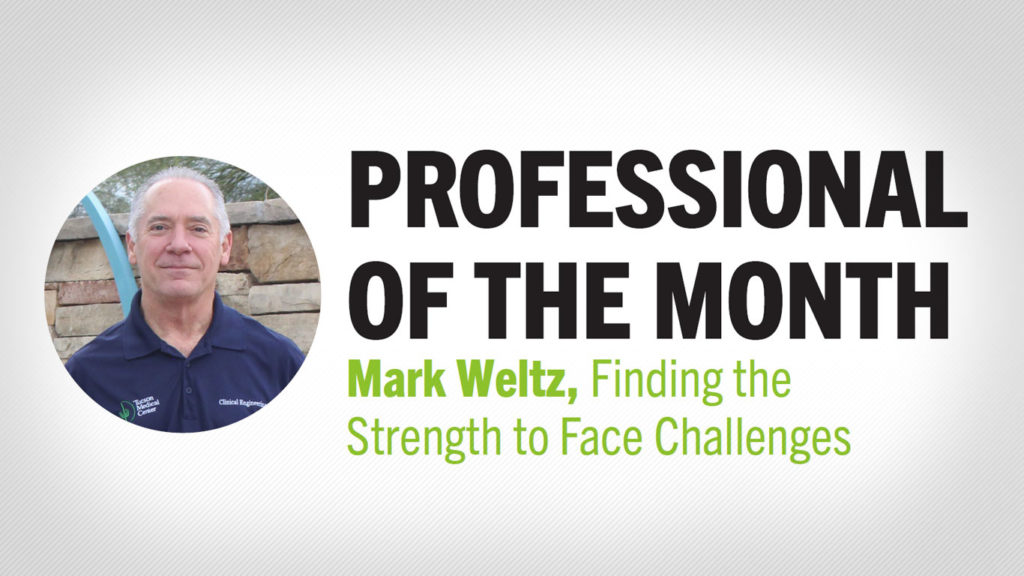 Tucson is a city in the Sonoran Desert in the southern half of Arizona, surrounded by giant saguaro cactuses. The city sits at a slightly higher altitude than the state’s other largest city; Phoenix, and as a result, enjoys slightly cooler temperatures in the summer.

For more than 75 years, the city of Tucson, and all of southern Arizona, has been served by the 600-bed, locally governed nonprofit regional Tucson Medical Center (TMC). It is the leading provider for emergency care and pediatric care.

Like many in the profession, Weltz began his training in the military.

“After leaving the Navy as an aviation electronics technician, I continued my electronics education in Boise, Idaho. After graduation, I started with GE Medical Systems in MRI/CT in the San Francisco Bay area,” Weltz says.

After GE, he went to Philips Healthcare and worked in diagnostic imaging for 30 years. While at Philips, the company sent him to Holland to train in MRI and CT. Later in his Phillips tenure, he was trained in X-ray and cardiovascular systems.

“I decided to work for a nonprofit medical company. After researching TMC, I thought that it would be a great place to perhaps make a difference in a patient’s life somehow,” Weltz adds.

“At Philips, I was the installation and site assignment champion. Here at TMC, I have been involved in all installation processes and implementation of every new MRI, CT and cath lab that has been installed since my arrival in 2017. Here at TMC, it is a team approach in regard to new major equipment.” 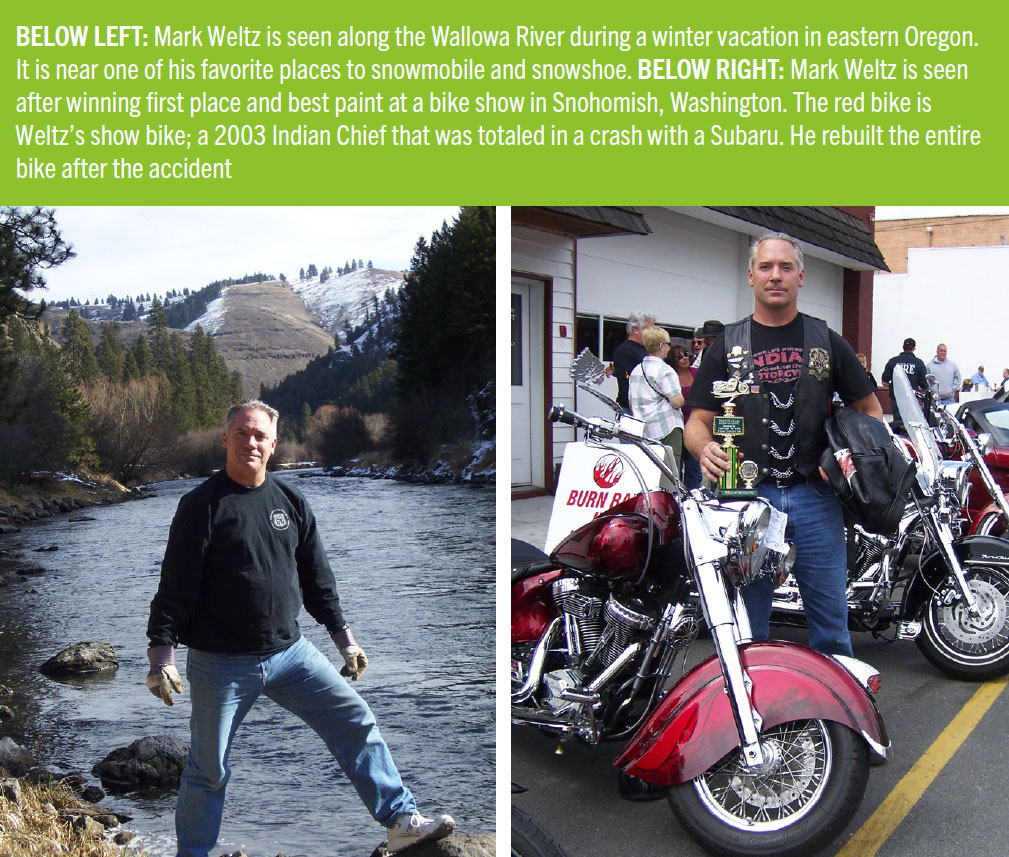 Many biomeds and imaging service engineers face challenges in any given week; from a vexing problem with a piece of equipment to the added stress and precautions that have come with COVID-19 surges.

Weltz has faced some physical challenges which might have put many people out of commission.

“A couple of years before moving to Arizona, I had gone for a motorcycle ride with my wife and friend. I rode my Indian Chief, with my wife riding behind me on her Harley-Davidson and another biomed was on his Harley behind us. It was a beautiful summer day in the Pacific Northwest just north of Seattle,” he remembers.

He says that after a day’s ride they had all stopped for some dinner along Highway 9.

“After continuing to ride home, and only about 20 minutes, a buzzed driver pulled out from a side road and then stopped right on the highway in front of me. She stopped her black SUV, and never even looked for vehicles. I had about 15 feet, and at 45 miles per hour there isn’t much time other than to brace for impact,” Weltz says.

He says that he made impact with the side of the SUV and his custom-painted bike was destroyed. 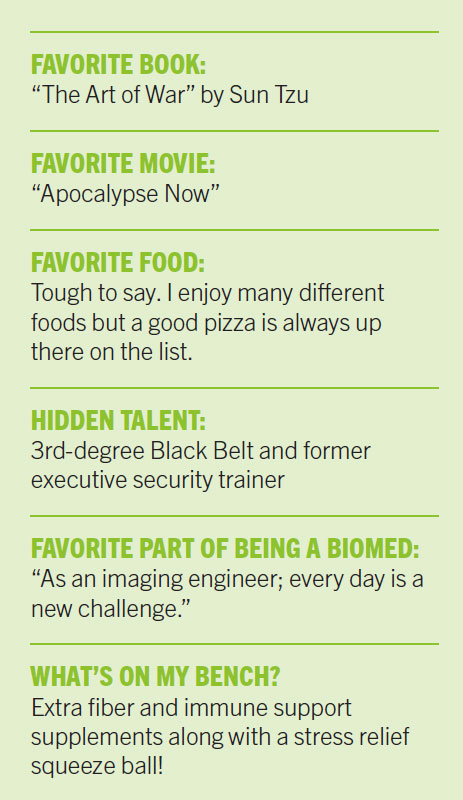 “I had won many trophies at bike shows with this bike. I knew immediately that something was seriously wrong, so I laid in the road until first responders arrived. After a few months of rehab and physical therapy, I returned to work, perhaps a bit too soon. I think my wife was expecting more work from me at home so figured it would be easier at work. I had to cancel a lot of plans that year, from hunting to no longer being able to teach Judo; one of my life’s passions,” Weltz says.

Weltz says that the first day back at work, he had a table problem on an MRI scanner at the University of Washington in Seattle.

“I could just barely walk at that time. It was a long and grueling night, but I was able to get the table repaired and put back together. Every step was difficult, but I just kept saying ‘one step at a time,’ ” he says.

“The bad part was that I was already partially disabled from a prior military injury, so this only compounded things. Yes, I did get back on that bike after totally rebuilding it and rode again; gun shy a bit, but had to do it,” Weltz adds.

“During this difficult time, I took a visit to Children’s Hospital in Seattle and as I walked through the cancer area and saw those children that had smiles on their faces and were tough as nails getting through their ordeals and some not knowing if they would even make it. This all made my challenges seem very small in comparison,” Weltz says.

After breaking his back twice, he had no choice but to retire from teaching martial arts.

“Then, a couple years after this had happened, I had a strange fall from a high chair and landed on the tile floor at work and received a nice compression fracture. I came to work every day and still got my PMs completed and work done. Sure, I was moving slow, but I just kept thinking about these small children and how they would keep their head up and never quit the fight,” Weltz says.

Weltz says that time management may be the most important skill working in the hospital environment since it is so easy to get pulled in different directions.

The message that Weltz believes in, and has lived out, is not to give in to setbacks.

“I am a U.S. Navy disabled veteran that has had his back broken on three occasions, five knee surgeries, one ankle surgery and still getting things done. Never give up,” he says.

Weltz says that working for a hospital allows you to work on equipment that can truly make a difference in a patient’s life.

“Always remember that at the end of the day, everything we do has a patient in the equation. Working for Tucson Medical Center has been a challenge, but with the help and support of a world-class group of peers, and a manager that is as brilliant as they come, it has made my transition from OEM to hospital so much smoother,” Weltz adds.

For those who could use some motivation, this senior diagnostic imaging engineer has a story that speaks to tenacity. Those who motivated him will never know the impact they had in helping one person work through several challenges.