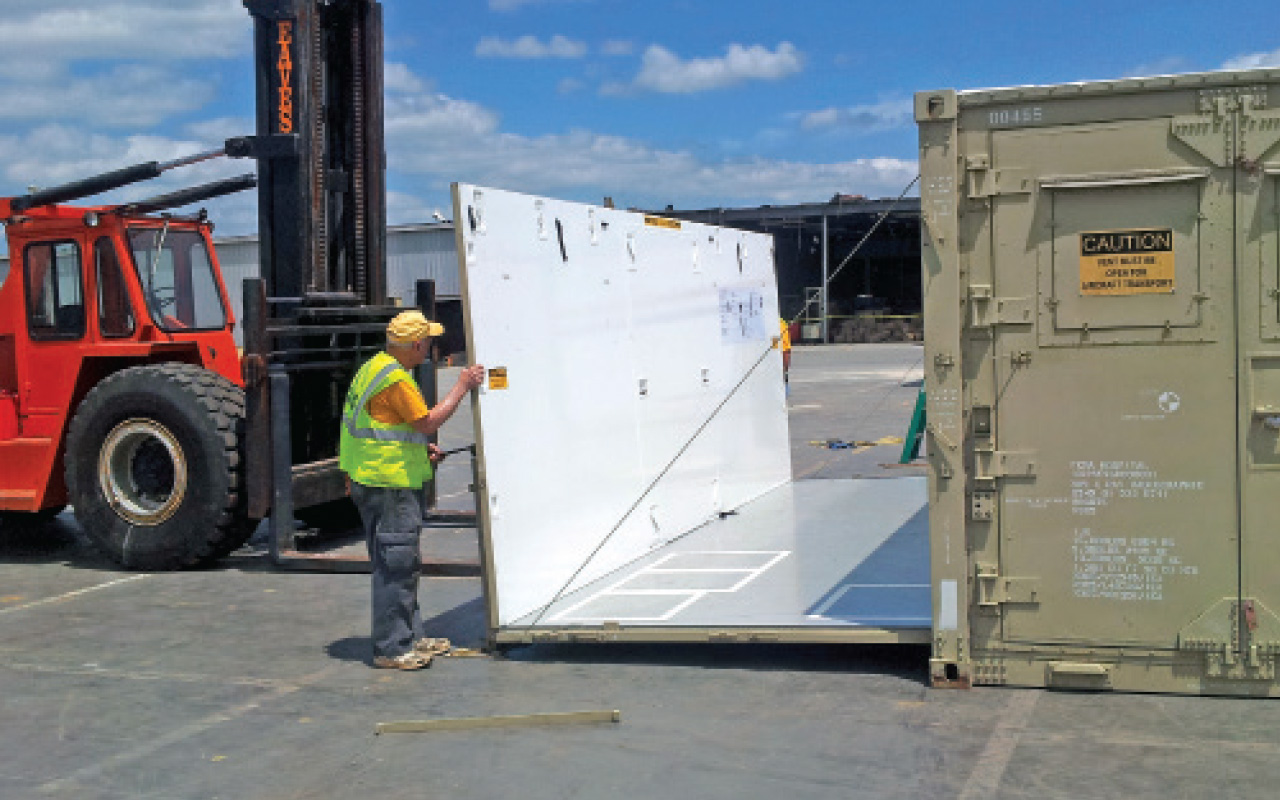 FEMA operates a special healthcare facility, called the National Mobile Disaster Hospital, consisting of a series of prefabricated structures transported on 18-wheelers. The unit was called into action for the first time on April 28, 2014, when an EF-4 tornado struck Louisville, Miss.

The tornado had wind speeds of 170 to 190 mph and was responsible for nine deaths and dozens of injuries. More than 42,000 residents were without power. The local hospital, the Winston County Medical Center, a nursing home and an outpatient clinic were heavily damaged. Gas service had to be cut off to the hospital and clinic.

The mobile hospital requires the assistance of clinicians, as would be expected. It also needs the skills of a trained biomed to maintain equipment and that task fell to Cary Setzer, a BMET with Southeastern Biomedical Associates in Hudson, N.C., who works as a field service technician.

Setzer was also recruited to help set up the hospital in Mississippi.

“I first got involved with National Mobile Disaster Team a few years back when our company began to do PM service on their medical equipment,” says Setzer. “I was one of the techs that performed the PM service because I have been trained on their anesthesia machines. I’m sure that I was probably chosen to go to Mississippi because of the time I have spent with their equipment and because I was trained on their anesthesia machines.” 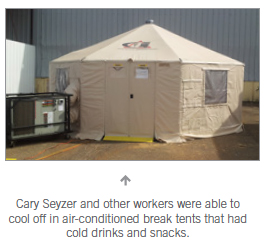 Cary Setzer’s career in healthcare technology management is the result of a conversation with a friend and a co-worker while he was attending classes at a community college. Setzer’s career in the HTM profession goes back to his hands-on experience with power tools in a family business.

“I grew up working in our family’s machine shop — City Machine Company — after attending Caldwell Community College for several years,” Setzer says. “Not sure what to take, a friend and co-worker found the biomed program. He started the program and then I started a year later.”

Setzer graduated from the Caldwell program with the skills to test, troubleshoot and repair medical equipment.

“It was a great fit for me, because having a machinist/fabricator background, I had a lot of the skills that it takes to repair equipment,” Setzer says. “My strongest skills are electrical and mechanical.”

His current employer has also sent him to ultrasound and anesthesia training sessions. The combination of his biomed training and his metal fabrication background was put to the test.

While Setzer was prepared to take on the medical equipment portion of the task and provide some training to local clinicians, he wasn’t aware that he would be called upon to contribute during the assembly phase as well.

With the first deployment of the mobile hospital, there was some anticipation of the unknown for Setzer in the wake of the disaster in Mississippi.

“I was not sure what to expect,” he says. “I thought I would be sleeping in a tent with very limited food or water. After arrival, I found that we did have hotel rooms and there was plenty of food and water. This does not mean that the work was any easier.”

The mobile hospital took 36 hours to transport to Mississippi and three weeks to completely set up. Setzer was in Mississippi for 14 days.

“This was the first time that this mobile disaster hospital had ever been deployed in its 10 years of existence. We were first deployed on a Thursday and we drove half way and arrived in Louisville, Miss., on Friday,” Setzer remembers.

“The site where the mobile hospital was to be assembled was a warehouse that was destroyed by the tornado,” Setzer explains. “The warehouse had not been cleaned up, so for the next 30 hours straight, a team of scrap iron workers removed the rumbled warehouse. We arrived on Saturday to an almost clean slab where that hospital would go. After the slab was cleaned, we started moving the pieces of the hospital in position.”

Setzer says that the mobile hospital is made up of nine sections transported on the 18-wheelers.

Those sections resemble pods. He says that the side walls are removed, and then the sections are connected to form a room with a separate room at each end.

“To unload the pods, we had to first unload and complete some slight assembly of a huge forklift. By Wednesday, we were unloading the pods and the side walls were being removed,” Setzer explains.

Setzer worked alongside an employee of a company called SPEVCO that built the mobile operating room. The SPEVCO employee had a fifth-wheel trailer that was full of the tools needed to assemble the hospital. The first week, the two collaborated to complete multiple tasks such as fabricating plates that hold the walls together. They also assembled the forklifts and unloaded trucks of utility task vehicles, generators and pods.

“We also helped the state of Mississippi set up their RVs for their headquarters,” Setzer says. “The assembly of the hospital was delayed by politics several times. For instance, there were 14 different site plans of the location of the hospital. Even after we had assembled the hospital, they wanted it moved again. This time it took a lot of planning, because now the pods are together and were supposed to be stationary. The final plan to move the hospital was to put a forklift at each end and push the whole assembly back 20 feet, and it worked.”

Once the whole hospital was in place, all of the seams had to be covered to prevent any leakage from the outside. In addition, the hospital had to be hooked up to generator power, suction and medical air. 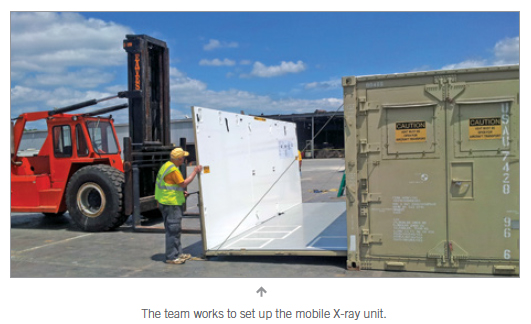 “After the assembly was complete, we started to load the hospital with medical equipment,” Setzer says. “In all, there are basically three main departments; ICU, which was the mobile O.R. trailer from SPEVCO. Then, there is the patient care area, which is the mobile hospital. The third piece is the X-ray pod, which is a full length trailer where the walls let down to complete a room that is double the width of a normal trailer.”

“There was a temporary clinic set up in front of our site where the hospital staff was seeing about 30 patients a day. I didn’t even realize that patient care was being given for a couple of days until someone informed me. There was the mayor, and governor of Mississippi stopping by to do interviews at the work site to inform the public that this hospital would be available very soon,” Setzer says.

He says that while all of this was going on, you could see homeowners in the area cleaning up their properties after the tornado had destroyed their homes.

“There were military type tents set up with A/C (where) we could get relief from being out in the sun,” Setzer says. “Inside the tents, they had tables, chairs, snacks and coolers with drinks.”

Once the mobile hospital was assembled, Setzer’s attention turned toward training the staff on the medical equipment.

“I held multiple classes over several days on the medical equipment to complete in-service training so that the staff would be able to use the devices we brought,” he says. “I trained the staff on infusion pumps, patient monitors, ventilators, defibrillators, ultrasound, aspirators and X-ray.”

“One of the highlights for me is how appreciative the staff was to be getting this equipment,” Setzer recalls. “I believe that it saved their jobs because they would not have had a place to work since their hospital was destroyed by the tornado.”

What were Setzer’s final thoughts after being involved with this important project?

“The most important part is that the staff could continue providing healthcare to their community,” he says. “I’m proud to have been able to work beside the people of Louisville, Miss., to help provide some temporary relief until, hopefully, they get a new hospital of their own.”

“We worked long hard days, but (it) was very gratifying because I could see how appreciative the local community was,” he adds. “I also got to witness the strength that people have to join together for the greater good, regardless of which state or side of the country you live in.”

“I also saw the side of some politics, and how the government is involved with the process; some good and some not so good,” he adds. “In all, it was a success, and the staff of the hospital were able to keep their jobs and continue to work.”