Who hasn’t heard the sarcastic quip; “If someone told you to jump off a bridge, would you do it?” It accuses the listener of being somebody prone to any suggestion or peer pressure. Incredibly, stepping off that bridge is a badge of honor in one sport. There are people who jump off bridges, and cliffs and towering antennas and buildings, and are proud to do so. And, they are not exclaiming “good-bye cruel world” in the process. They know exactly what they are doing and enjoy the challenge. At least, the devotees of BASE jumping do.

BASE jumping is an acronym for Building, Antenna, Span, and Earth, denoting some of the most common fixed structures that jumpers leap from. The jumpers employ a rapid-deployment parachute to shift things into controlled descent mode as early as needed. 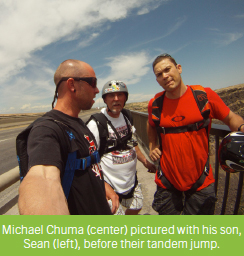 Michael Chuma, a biomed manager with JANNX Medical Systems, working at Mercy Medical Center, has taken the plunge and had expert guidance in the process. Chuma’s son, Sean, is one of the most experienced BASE jumpers in the world and has a track record in the sport that puts him in the record books. It was with the confidence of having his son’s expertise that put Chuma into enough of a comfort zone to have his toes dangling over the edge of a platform on the 486-foot high Perrine Bridge in Twin Falls, Idaho.

The first time he went off the platform, attached to the side of the bridge, he made a tandem jump with Sean. It was in June of 2012 and Chuma says that the Perrine Bridge was the only bridge that BASE jumpers could use year around legally.

Not for the Faint Hearted

Jumping off of a bridge from nearly 500 feet up could be terrifying, but Chuma knew that his son had loads of experience doing just what he was going to do and took a methodical approach in preparation.

“The morning started very early watching the other BASE jumpers packing their rigs and talking about the day ahead,” Chuma recalls. “Sean usually goes around greeting everyone insuring everyone knows what they are doing. He is kind of the ambassador of BASE in Twin Falls. After several hours of watching the jumpers do their jumps, to include my son, it came my time to prepare,” Chuma says. He says that Sean explained to him what was about to happen. He says that his son wanted to make sure he was ready and didn’t panic during the jump. Sean then placed the tandem harness on him, making certain it was very snug so he wouldn’t slip out.

“I actually felt fairly calm,” he says. The calm did not last.

“He put on his gear, and us and other jumpers, walked out to the bridge. At that time the nerves started. We got to the exit point, which was a platform he and a friend built,” Chuma says. “Once again, he checked to see that my harness was all intact and on properly. He then checked his gear. Now, came the time to climb over the rail of the bridge. That was the hardest part because I became tense, and at the age of 60, I am not as flexible as in my younger years,” Chuma adds. 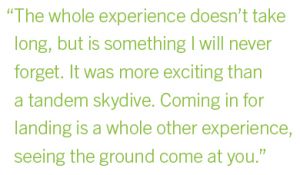 Once the two got on the small platform, Chuma remained strapped to the rail for safety. His son ensured they were hooked together. At this point, Chuma had to turn around so that he was facing looking out over the platform at the expansive drop below.

“Now, that was nuts,” he remembers.

“As we turn, he is telling me where to put my feet. At one point, he kept telling me to put my feet on the edge with my toes hanging over the edge. You can imagine what I was thinking and saying. He had another person on the bridge holding the pilot chute as we prepared to jump,” Chuma adds.

“This is called a PCA. All I know is this person holds it until we jerk it out of his hand when we fall,” Chuma says “It opens our chute.” When everything was in order, Chuma’s son had him count to three and they made the leap.

“I think we fell about 50 to 75 feet before the chute fully opened. It was the most awesome experience I have ever experienced; what a rush,” he says. “The whole experience doesn’t take long, but is something I will never forget. It was more exciting than a tandem skydive. Coming in for landing is a whole other experience, seeing the ground come at you,” Chuma says. He says that in most cases, people land standing up, but he ended up sliding in a sitting position. 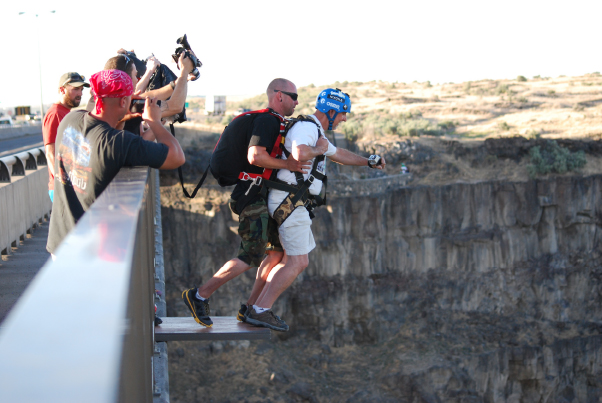 Jumping off a bridge isn’t the only experience Chuma has with free falling. He has tandem jumped from airplanes a few times also. He once jumped with his son, who is also a very experienced skydiver. “A tandem off of an object is like night and day compared to an airplane,” Chuma says. “There’s no comparison.”

He points out that there can be obstacles to negotiate when jumping off of a cliff, but it is open air when skydiving.

Since his first tandem jump off the bridge, he has also made two solo jumps; all in 2012. Chuma landed in the Snake River on his solo jumps and boats picked him up. His son’s business has someone in a boat for this reason.

Chuma has been an HTM professional for a long time, having spent a total of 29 years with Aramark, including time with Masterplan. He worked for CREST Services also. He has spent more than two years as a manager with JANNX Medical Systems.

Don’t try to play a practical joke on this biomed; he only falls for what he wants to. SEAN CHUMA’S BUSINESS, TandemBASE, can be found at www.tandemBASE.com.