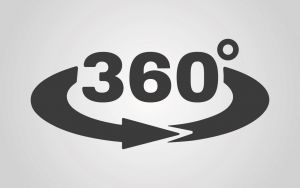 Throughout my career working within hospitals, a very important skill that I acquired early and have honed during my HTM tenure is what can I call “Eyes 360.” It is a highly reliant skill and in many ways it is a tool of instinct.

As an HTM professional who works in the health care environment where medical equipment responsibilities are assigned and performed, Eyes 360 can be more far reaching that any theory taught in a technical school.

On a recent visit to a valued client site my Eyes 360 skill came into play. As I entered the CT clinical area for the primary purpose of my visit – the CT scanner – my Eyes 360 picked up several other items within the area. What were those, one may ask. Well, directly behind the CT’s gantry were two very large unsecured medical gas tanks that stood about five feet tall. Anyone who is even somewhat familiar with rocket propulsion theory can visualize what might happen when a five-foot tall medical gas tank is tipped over violently and the inlet tip either becomes cracked or broken. The result is a missile effect that makes the medical gas tank a projectile of destruction to anyone or anything in its path. My immediate reaction was to call over the clinical manager responsible for the area and share the serious safety situation I had discovered in this CT suite using my Eyes 360. The hospital’s medical gas tank farm folks were summoned by the clinical manager and they removed both unsecured tanks in less than half an hour.

Another instance that comes to mind was while rounding at a valued client’s site. This time, I was in a hybrid operating room that housed a bi-plane interventional imaging system, patient hemodynamics monitoring equipment, anesthesia, ultrasound and other very expensive pieces of medical equipment. We all gathered in the room and were discussing the clinical setting and its technology attributes. During our conversation my eye caught what appeared to be a discreet discoloration in a ceiling panel. My Eyes 360 told me to find a step ladder and touch the discolored ceiling tile to satisfy my curiosity. Well, it was moist to the touch and lifting the panel exposed a leaking pipe that needed immediate attention.

The message of this month’s column is that vision is an inherit skill that all HTM professionals can develop and nurture. The concept of Eyes 360 is not rocket science, but one of common sense. Observe your surroundings constantly, look for the obvious and search out hidden traps and land mines that exists in the health care environment. Be on the lookout for things that can affect patient/staff safety, create equipment service event challenges and promote the value of service excellence. We all have a vested responsibility when it comes to the delivery of quality patient care.