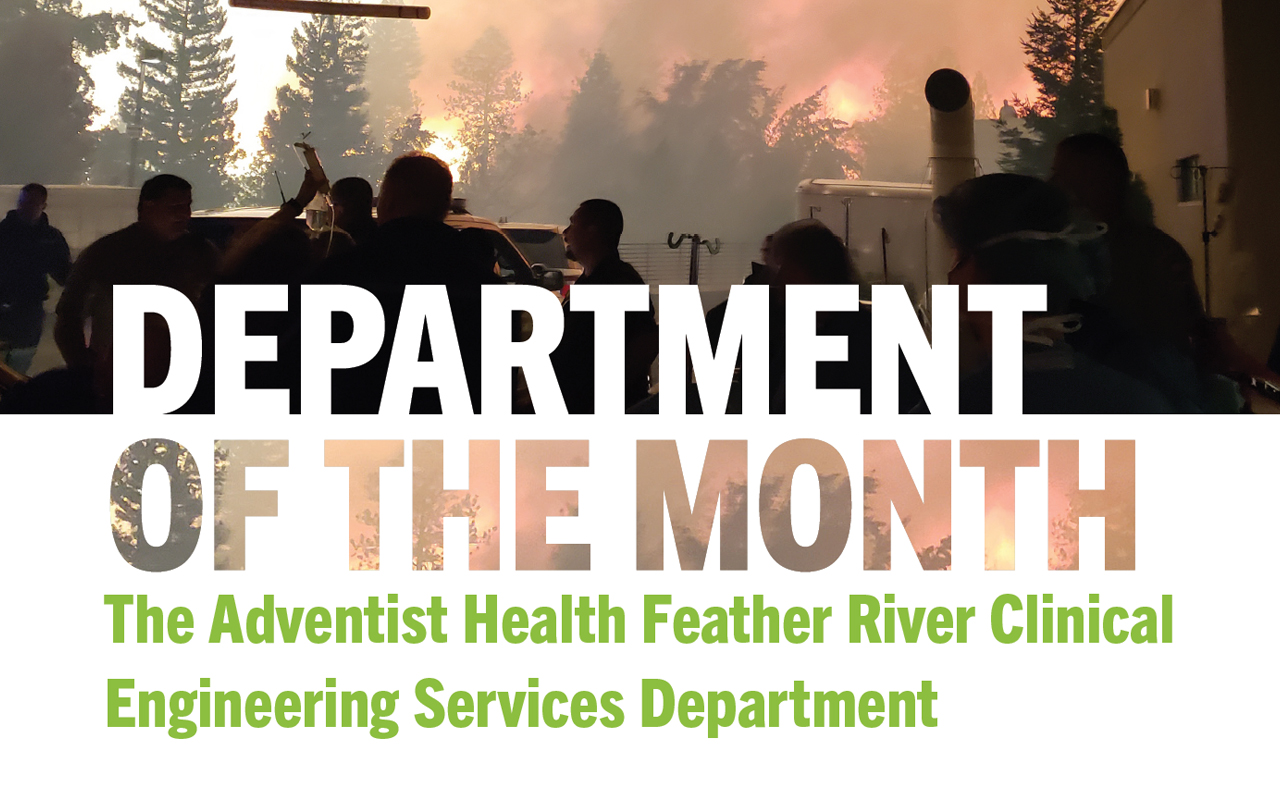 Posted By: TechNation Development Teamon: February 01, 2019In: Department of the Month, Magazine, Spotlight

A dog sat outside a burned down home in Paradise, California as it waited for its owner. The same wildfire, that destroyed this home, had destroyed thousands of other homes and killed at least 86 people in the area. The Camp Fire was the deadliest in California history. It began on November 8, 2018 and continued its rampage for almost a month before being extinguished by the brave and tireless work of firefighters and hotshot crews.

It was nearly that long also before many residents were allowed to return to where their homes had once stood, evaluate the damage and search for anything that might remain.

The ashes from some of the first homes and thousands of trees were carried by the flames high into the air, where they fell back to earth.

That was one of the first tangible indications of the encroaching fire that Marc Silver, BMET III, lead biomedical engineering technician for Adventist Health Feather River, experienced.

“On November 8, I arrived around 7 a.m., and began unloading my vehicle from working offsite the previous evening. As I was gathering test equipment, I noticed that small charred chunks of tree and ash were beginning to rain down on me,” Silver says.

“The air was smoky, and when I got inside, we were told there was a fire two ridges over and to be ready for evacuation, but be calm to not panic the patients. Then, the air became even heavier with smoke and we had noticed rolling smoke from the canyon very shortly after we got the order to evacuate, the fire was on our ridge,” Silver adds.

California has known many wildfires and, along with earthquakes, they are something to be aware of and educated about. Silver says that it quickly became apparent that this fire was different, as he looked out the CNU entrance and saw red flames in the parking lot.

“I’m the site director and at this time I have three BMET staff members. We manage about 5,500 pieces of medical equipment on the main campus as well as 30 other facilities,” says Rob Harry.

“On my way to work I could see the plume of smoke several miles away over the Ridge. Fifteen minutes after I arrived, an incident command center formed, and a few minutes after that an evacuation alert was given. We could see smoke directly behind the hospital,” Harry says.

He says that they jumped into action and found as many wheelchairs as they could and staged them in front of every patient room in the med and cardiac/neuro units. They pushed patients in their beds to the ambulance bay for evacuation. After they finished, Harry gave the word to disperse.

Harry says everyone has their own story at that point.

“Mine was, trying to evacuate myself. I became trapped by the fire along with several other vehicles,” he says. “With the help of a bulldozer, coming out of nowhere, [it] helped us get back to the hospital where I helped in a makeshift triage to help patients that were trapped from leaving the area,” Harry adds.

Silver remembers the procedures they used to evacuate patients.

“We began to assist by gathering up as many wheelchairs as we could, the nursing supervisor had asked us to fit them with the leg braces and get each one to a door of a patient room. The nurses and CNAs began loading patients into chairs and the order was given to move them to the ER ambulance entrance,” he says.

“Then, they began moving the beds to the elevators for the patients that could not get into a chair. Because there were so many beds and only two elevators, the decision was made to push some beds outside and up the hill to the ambulance entrance. My wife Jennifer – an RN at AHFR – and I worked together to push a patient up. I know the other biomeds were doing the same, just trying to get patients to the ER for evacuation,” Silver says.

He says that once the evacuation line was set, they returned to CNU and assisted with the final closing; shutting doors, making sure rooms were cleared, etcetera, then returned to assist with the loading of patients. Silver says that they began to see buildings on campus ignite and burn and hear propane tanks explode.

“There were not enough ambulances available, so we began to put patients in any vehicle we could. One of the biomed staff — David Falcon I believe — took a woman who just had a baby in his car to try to escape. I assisted my wife in loading her patients into sheriff’s vehicles and hospital staff vehicles, anything we could find. It became controlled chaos getting the patients loaded,” Silver says.

Silver says that once the last patient was loaded, they were told to “leave now.” They jumped into a 4Runner owned by one of the IT techs, a great friend of his named Jacob Boone, who had been in the line to evacuate a patient if needed, and he began the slow drive out as everything around them began to burn.

While biomeds have had to respond to hurricanes, tornados, a spike in patient arrivals because of a terrorist attack and wildfires, there is a lesson to be learned from each experience.

“Pay attention to, and know what to do, in a disaster. Be prepared and be ready. Know your role and learn the job of others as well so you can assist. Know where things are stored or how to properly mark a room cleared in a fire/drill,” Silver says.

“Keep a calm head, and be flexible. Adapt and overcome,” he adds.

In addition to the thousands of people displaced and left homeless, the lives lost and the community badly damaged, the Camp Fire took a toll on the biomed staff at Feather River.

“One of our staff lost their home and has had to relocate. Others could not get back to their homes for the past month and had to find places for their families. My friend, that drove my wife and I out, is now living with us,” Silver says.

“Our shop burnt down completely, everything inside lost, all tools and test equipment. Estimates for rebuilding, I have heard, from 2020 to 2024, but nothing official,” Silver adds.

There are times when a team of HTM professionals have to react and respond to circumstances far outside what is routine. The biomed team at Feather River proved that they have what it takes to face down the most challenging situation and save lives.