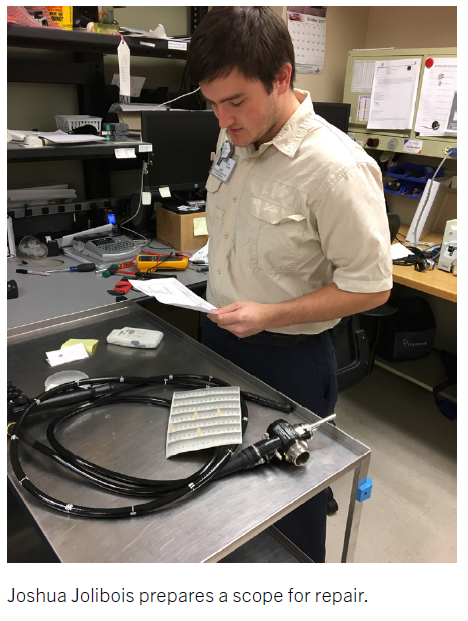 This is real middle America and the good people of Grand Island are part of a total population of 83,000 throughout the entire Grand Island metropolitan area. Serving the health care needs of these Midwesterners is Catholic Health Initiatives (CHI) Health St. Francis.

“CHI Health St. Francis is a 159-bed hospital with a full range of services that include a cancer treatment center, long-term care, women’s imaging services and a variety of specialty clinics,” says Scott Ostrand, CBET, CHTM, manager of clinical engineering.

Buss works part-time and previously retired from St. Francis. He has 27-years of experience in HTM. Glause brings many years of electronics experience and converted to HTM three years ago. Jolibois is a graduate of Bates Technical College in Tacoma, Washington, where he was enrolled in the biomedical technology program. Ostrand manages clinical engineering for St. Francis along with three other hospitals in Nebraska.

Because CHI is a national organization, service contracts are managed at the national level with input from the local CE department.

“All requests for contracts must be requested through our CMMS (TEAM). There is a multi-stage process for getting a contract. First is the data input stage, where all pricing, terms of the contract, duration, type and asset info are entered. Second is the financial review. We are able to run asset history reports to determine historical costs. If the contract is a renewal we gather information from the OEM to determine what the time and materials cost would have been without the contract,” Ostrand says.

Data collection is accomplished through the use of multiple modules within their CMMS.

“The primary ones are for asset management and work order tracking. We also have a financial module, a contract module and a capital module,” Ostrand says.

“Data input for the work orders is placed into the CMMS by technicians,” he adds. “The asset information is entered at a central area and must be selectable by existing model, otherwise further work must be accomplished in order to get this onto the standardized list. The contract module is managed locally, but approved nationally.”

He says that all contract proposals must be reviewed for efficiency and only approved with a rigorous justification review. The capital module is a collective effort of all the various stakeholders. All members of the capital group receive notices of intent to purchase. This starts the process of obtaining capital. 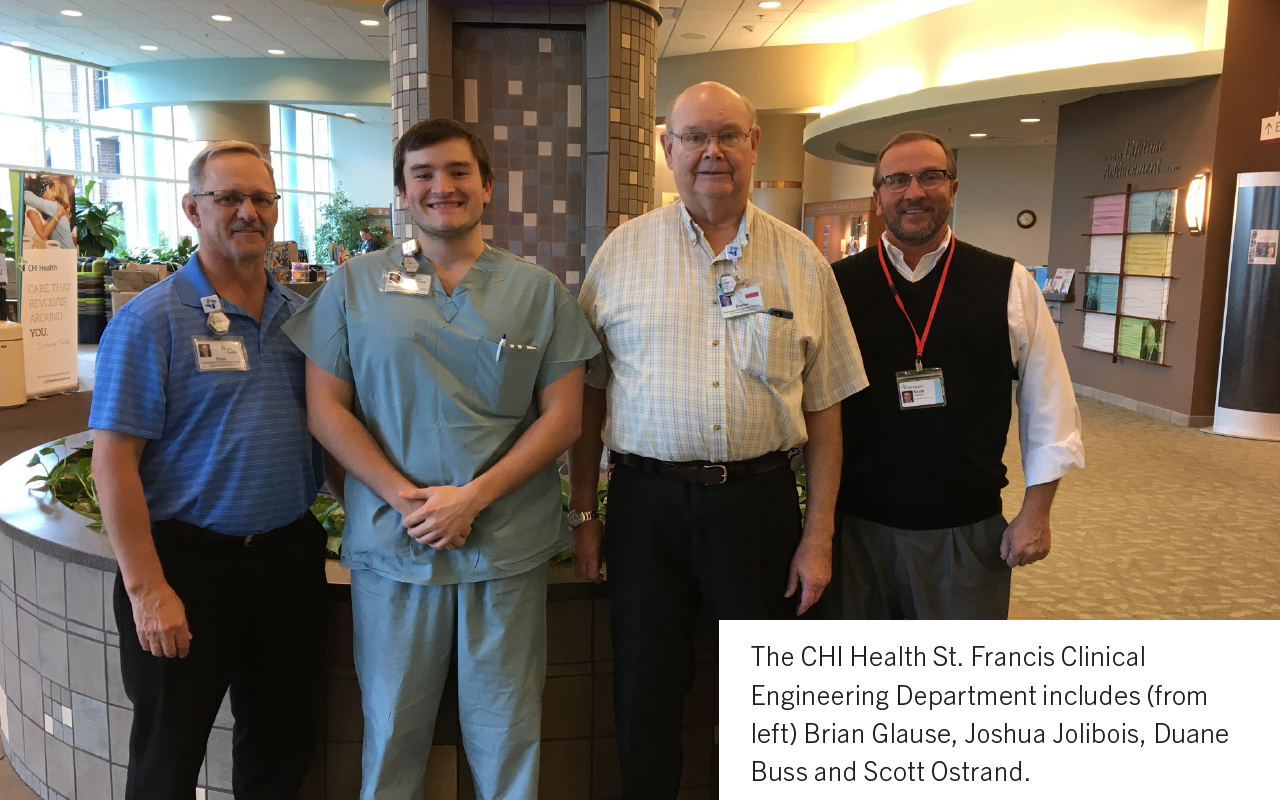 The team has had its share of projects and challenges and rose to the occasion for both.

One challenge was project management for a Philips patient monitoring installation.

“We provided project management services for the newest monitoring and telemetry install. We coordinated Philips with the clinical staff and provided updates to the executive team. Detailed as-built drawings depicting server, switch and port locations were kept for future references,” Ostrand says.

“All infrastructure coordination, and network design, was reviewed by CE and IT. After the project started, inventory was completed and all devices were entered into TEAM with all standard rankings in place as well as a PM schedule assigned. Post install, we coordinated the redistribution of unused assets to other CHI facilities. We are truly a one-stop shop for services, planning and a steward of resources,” Ostrand adds.

Often, CE is called upon to put on its collective detective hat. The CHI Health St. Francis team recently found itself doing just that. “The current nurse call system has the ability to send text pages to the nurse phones. Recently we noticed an unusual amount of work order requests for repairs on phones. Perception was that texts –preprogrammed notifications based on nurse call alarms – were not being received or occasionally sent to the wrong person,” Ostrand says.

Another challenge, begging for a solution, had to do with the nurse call system at skilled nursing (long-term care).

“An increased number of service requests started our investigation to the problem reported. Many patient rooms would start alarming as if there was no nurse call pendant plugged in,” Ostrand explains.

“Although true, we found a large number of plugs that held the patient pendant were loose. Also, we noted that many calls came in where the pendant was completely out of the socket. After repairing the loose sockets, the calls continued (although fewer). We discovered that many nurses were clipping the pendant to patient wheelchairs and patients were rolling away without unclipping them. We installed a retention system, that was stronger than the clip, so that if the patient forgot to unclip, it would pull loose off the chair and prevent damage to the sockets and pendant cables,” Ostrand says.

The CE team members are all members in the Heartland Biomedical Association (Eastern Nebraska/Western Iowa). Scott Ostrand was the 2017 president of the HBA and currently serves on the executive board.

The CHI Health St. Francis Clinical Engineering team may be small in size, but they are big on efficiency and resourcefulness.