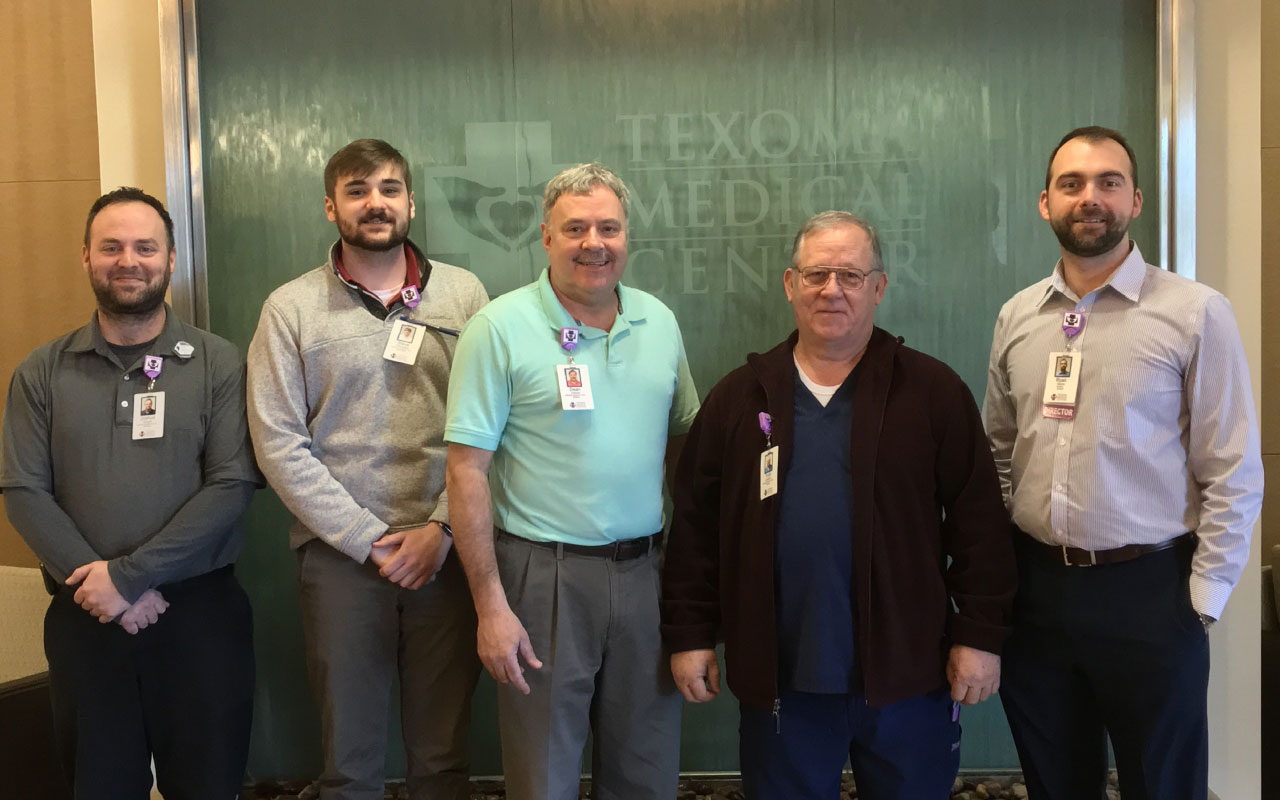 Posted By: K. Richard Douglason: May 01, 2018In: Department of the Month, Magazine, Spotlight
Print Email

The birthplace of Dwight D. Eisenhower, the 34th president of the United States, is a city called Denison, Texas, 75 miles north of Dallas. It is part of the Texoma region of Texas, close to the Oklahoma border.

The Texoma Medical Center in Denison is a 294-bed health care facility, which will soon have a new tower that will increase its bed count.

In addition to the medical center, the HTM team provides services to the TMC Bonham hospital nearby, which is a 25-bed critical access facility. They also serve seven offsite clinics.

According to Harris, some members of the department are specialists.

“Todd Johnston specializes in respiratory equipment, physiological monitors and dialysis. Dean Palmer specializes in OR equipment. He is trained on anesthesia, and heart lung bypass. He also manages all of the flexible and rigid endoscope repairs,” he says.

“Joshua Knight specializes in imaging equipment and is trained on many systems. Right now, he works on C-arms, portable X-ray, ultrasounds, bone density scanners. We have plans to expand his service to other imaging equipment in the near future,” Harris says.

The HTM team hasn’t always been an in-house operation.

“Our biggest project has been converting from a contracted biomed department to in-house back in October of 2016. Dean Palmer and I had been working here for a few years before the conversion. We were able to find three other great technicians to join our team,” Harris says.

“Our shop was too small for five people, so from day one, we had to hit the ground running by moving into a bigger space while still taking care of any urgent maintenance needs. For parts and test equipment storage, we assembled a five-shelf sliding storage system. We also put together five workbenches. The hard work and team effort that went into this project set the foundation for a great future,” Harris adds.

He says that nobody complained or acted negatively when faced with these tasks, so it was an early indication that the team had the right attitudes in place. They also did a remarkable job keeping costs down.

“After we got settled in, we had to adjust to the expanded work load and increase our skillsets. To get us started, we had plenty of help and insight from Chris Nowak, our corporate HTM director, who was also overseeing concurrent transitions at all other UHS hospitals. A few months after the transition, Don Allen joined the team as our regional program director. Don has many years of experience in our field, so having him available to help guide me has been very effective. Our preliminary cost of service ratio calculation for 2017 is 3.79 percent, and we are proud of that,” Harris says.

In January of 2017, the HTM department took over management of all imaging equipment maintenance.

“We are responsible for coordinating all service activities with the vendors, and everything is captured in our CMMS, providing an unprecedented view for that equipment at our facility, and our radiology management team loves it, because they can now access our database from the Internet and see all of the maintenance documentation right there in one place,” Harris says.

He says that in July of 2017, they began to inventory all flexible and rigid endoscopes along with powered surgical instruments and respond to the OR when problems with those devices were reported.

“When they fail, they are being sent out for repair by the HTM staff. Like the imaging equipment, we now have solid data in our CMMS to study when making decisions about service strategies for this equipment,” Harris says.

“After only six months of history, we were able to target certain problematic models of endoscopes to consider for service contracts. We also coordinated some on-site education for our OR staff that covered proper handling and disinfection procedures in hopes to decrease repair costs,” he adds.

Harris says that when his team took over the maintenance of hospital beds, he could immediately sense frustration from nursing, and knew that they had their work cut out for them.

“There was uncertainty among them about which beds were capable of interfacing with our nurse call system. As it turned out, almost all of our beds could interface, but they were either missing their communication cables or the connections on the bed were damaged,” he says.

“My team went through and put cables on beds that didn’t have them and repaired the beds that needed work. About six months later, we had to go back through and physically attach the cables to the wall in each room because some of the rooms and beds were missing the communication cables,” Harris adds.

Today, almost 100 percent of the beds are integrated to the nurse call system.

“We still face challenges with the beds, but by listening and communicating properly with nursing, while providing education when needed, I think that we are in a good place right now and providing the staff with a level of response for the beds that they were not getting in the past,” Harris says.

The HTM team also has a close relationship with their IT department and works with them collaboratively on networked devices.

“We are currently working together on a project involving IV pump integration with our EMR, and the project’s success will rely on help from both of our departments,” he says.

In northern Texas, the HTM functions get done right because of a small, dedicated team of professionals who work in the same place where a great general and president emerged. Both dedicated to getting it right.