Professional of the Month: Jorge Contreras, CBET – When Circumstances Call

Posted By: K. Richard Douglason: May 01, 2018In: Magazine, Professional of the Month, Spotlight

Contreras is a biomed who works for enBio Corp. He has been assigned to Sonoma West Medical Center in northern California since May of 2017. He is the sole biomed at the facility and manages all the equipment himself with the exception of radiology and respiratory equipment.

He has seen much of the country first-hand and lived in several locations before landing in northern California.

“I was born in Brooklyn, New York. Shortly after 9/11, we moved to Pennsylvania. After that I’ve been to Florida, Oklahoma, Colorado and now California. In the four years since I’ve been involved in biomed, work has taken me to Texas, Arkansas, Minnesota, Illinois, back to New York and even Maui,” Contreras says.

He says that he first became interested in biomed in college.

“I was a drafting major but quickly realized it wasn’t capturing my interest. I wanted a career where I could help the public and really feel good about myself at the end of the day. I went through the college catalog and found biomed and I immediately knew this was the field for me,” he says.

Contreras changed his major from drafting to biomedical equipment technician.

“My professor, Hugh Holly – from Tulsa Community College and owner of Commercial Medical Equipment in Tulsa – took notice of my interest and hired me before graduation. With his mentoring, I made it through college, and through specialized training from various manufacturers,” Contreras says.

He earned his CBET certification in November of 2017. 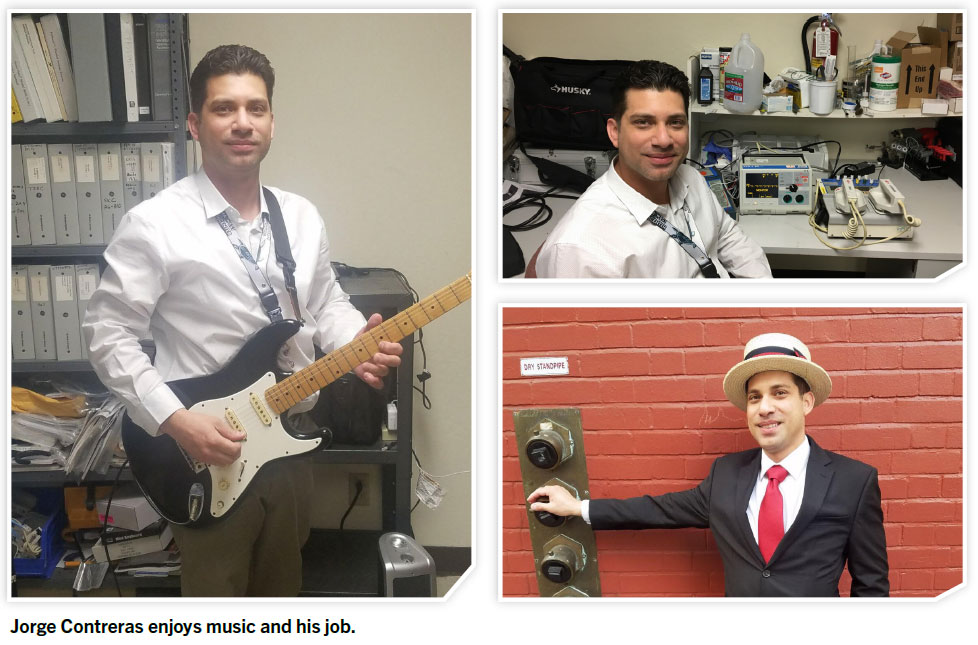 Emergencies and disasters have become an additional challenge for many in the HTM community, as hurricanes, tornados and mass shootings have impacted health care facilities. Add to that list; fires. Asked about challenges, Contreras recalls the massive wildfires that raged through parts of Sonoma County, California, last year.

“The fires started hours before the sun came up. By the time I woke up, we were in full-on disaster mode. I made it in as early as I could and there were many unexpected challenges. Two of the other hospitals had closed and the hospital I support, Sonoma West Medical Center, was the only hospital open in the western part of the county,” Contreras says.

“We received a large number of patients and suddenly there wasn’t enough staff because many had to escape the fires themselves with their families. I helped other departments whenever I could. I picked up empty food trays, helped environmental services out, whatever was needed – it was all hands on deck,” he adds.

He says that one big challenge that occurred during the fires was the short supply of biomedical equipment at the hospital.

“It’s a 37-bed facility, but suddenly, we had patients out in the hallways and we needed equipment direly. Other hospitals in the area helped us out by loaning us their equipment, and as the sole biomed, I was responsible for testing each device before placing it in service,” Contreras says.

“Other challenges were a lack of patient beds. I sought out vendors who could rent us the equipment, but because of the fires, there weren’t many responses. But, we pulled through, and the county, the staff and the residents of the town all became closer because of these events,” Contreras adds.

Another challenge was not as much of an emergency, but still important.

“One of the projects I was involved in was a recall for infusion pumps. I located pumps in the facilities I operated at, but also at other facilities managed by my company. I take patient care seriously and I’ll go out of my way to help out health care facilities and my coworkers,” Contreras says.“Unless your equipment has tracking devices it’s not easy locating the items that move around the entire building. I made a spreadsheet of each infusion pump in inventory and highlighted those affected under the recall. I isolated the pumps and began testing them according to the manufacturer’s specifications. Then, I searched the inventories of other hospitals that my company is contracted to manage, and I passed the message on to management so they could begin the process of testing the pumps under the recall,” Contreras says.

When not on the job, a couple of musical instruments are Contreras’ passion. He spends his free time playing the guitar and piano. He is self-taught and now teaches family members how to play.

“I picked up the guitar at 14 and started playing the piano at 28. I went into the electronics field in hopes of repairing my own musical equipment. With the knowledge I gained in school, I was able to not only work on my gear, but I had a small business/hobby working on other people’s equipment. I always said to them, ‘If I can repair a defibrillator, I can repair your amplifier,’ ” Contreras says.

What should readers know about Contreras?

“I’ve taken jobs and worked on projects and I’m fortunate to have seen this great country. I’m very happy with my decision to become a biomed. It’s very satisfying and I recommend the field to anyone who is interested in helping others and still wants to pick up tools and repair equipment,” he says.

It’s clear that this rural hospital in northern California has the right person holding down the fort in biomed. And when unusual circumstances throw a wrench in the machine, he is up to the task.