Posted By: K. Richard Douglason: December 01, 2017In: Department of the Month, Magazine, Spotlight 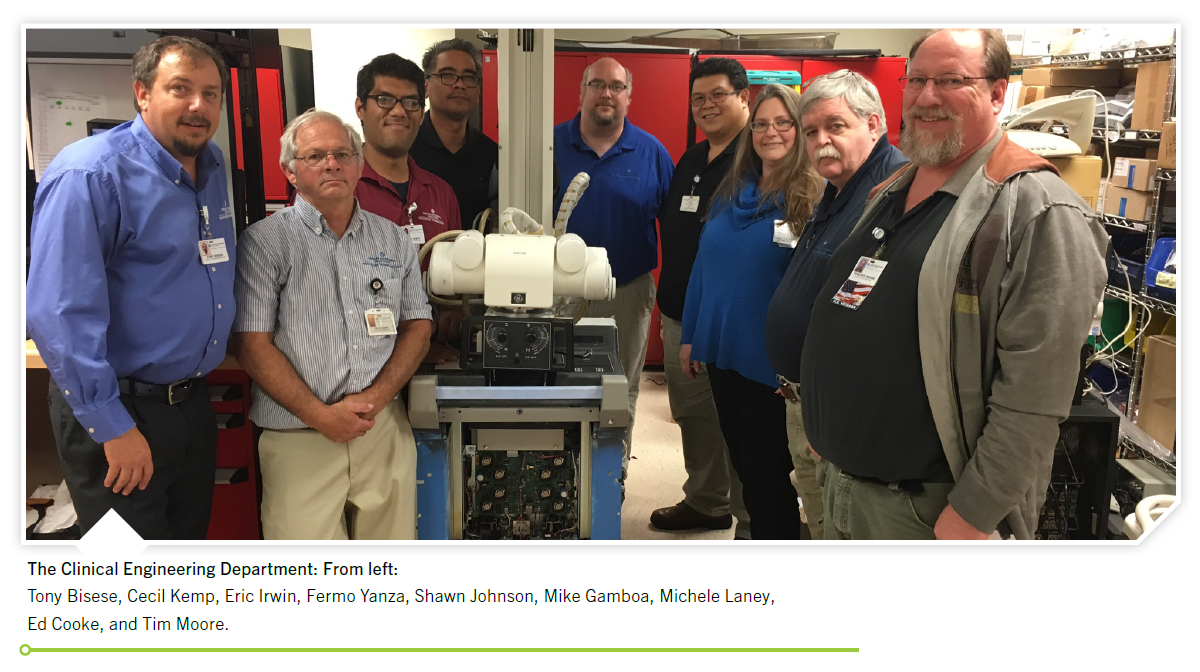 Nestled next to the resort city of Virginia Beach, in southeastern Virginia, is the city of Chesapeake. Part of the Tidewater region of Virginia, there are waterways that are prominent features of the area, with access to the nearby Chesapeake Bay and highway access to historic Williamsburg. Fishing, boating and bird watching are favorite pastimes in the Great Dismal Swamp National Wildlife Refuge, which is in Chesapeake.

Serving the health care needs of the people of Chesapeake, and more broadly, southeast Virginia and northeast North Carolina, is Chesapeake Regional Healthcare.

The medical center uses an Aramark clinical engineering team to handle the management of its medical equipment. The department is made up of 11 members. The team supports Chesapeake Regional Medical Center, a 310-bed facility, as well as two surgery centers and imaging and diagnostic centers.

“The Aramark team stands behind its mission to deliver experiences that enrich and nourish lives. The team is known for its innovation and ability to think outside the box to get the job done,” Bisese says.

“I think the most noteworthy accomplishment of the team does not lean on the technical abilities but the ability to adopt the organization’s values in the hospital and the community,” Bisese adds.

The team works as a unit and has a wide variety of skills to cover most devices.

“The team is cross trained in many modalities; for example I have three trained technicians on sterilizers. It is important for our hospital departments to recognize the CE department for its technical capacity and not an individual,” Bisese says.

“Although the team may have a designated area they are responsible for during PMs, we share the load in rounding and service delivery to ensure the team is known for its contributions to the hospital,” he adds.

The group is also active in the management of service contracts.

“All service contracts are managed through clinical engineering. They are input into our CMMS. We begin assisting the hospital with service agreements at the point of sale,” Bisese says. 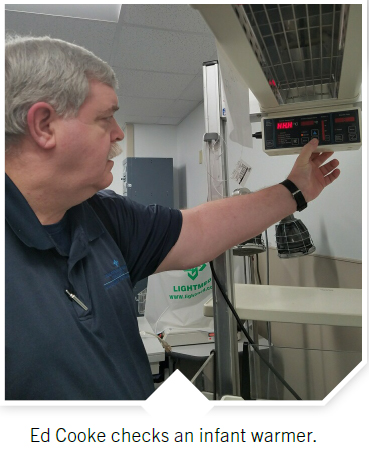 A recent project called upon collaboration between departments to get it done right. The CE team stepped up to the challenge.

“Our facility recently went to Epic and incorporated Capsule as the middleware. This was a project that would break down the team’s silo and really lighten the gray area between biomed and the IT department,” Bisese explains.

“The team began to understand they no longer could operate within the unspoken rule, ‘biomed is responsible for everything up to the wall.’ The department started to shift from an us to them to now a we (a united service team that would consist of facilities and IT). All departments would learn to have an appreciation for each other and would have a handshake agreement that patient care and the project completion was the top of everyone’s agenda,” Bisese adds.

“I challenged the team to take the ball and run as far as they could with it. They turned into the water boy and when they were pointed in the right direction they did not stop and could not be stopped,” he says.

Bisese says that the team even learned to use a new piece of test equipment called the Fluke LinkRunner AT-1000 to test network runs, identify IP addresses, network switches and more.

“The team stepping up, and doing this level of troubleshooting, actually brought unity with our IT department. It was also fun to watch them get a quick lesson in HL7 and variable mapping. It was fun to be able to watch the data move from device to Capsule and on to the EMR,” Bisese says.

He says that the results were a reward in itself, especially after hours spent on device and server build.

“The department now manages all the calls from the device to the Capsule server. They don’t have to wonder if this is an IT or biomed issue. They call us,” Bisese says.

“My advice to any department that is looking to move to Capsule: I would say take ownership of it in the beginning and force the team into collaboration with the other departments. We came out a different and better department with strong relationships with our IT staff,” he adds.

Another time the team was faced with a challenge, they found a resourceful way to get information out to their clinical colleagues.

“We were receiving a high number of work orders for bed repairs and infusion pumps. After reviewing the work orders, the team determined a lot of the work orders were related to use. It was determined the floors needed an in-service on the equipment. That is normally how we determine if there needs to be additional training on the floors when we see a lot of user errors or cannot duplicate,” Bisese says.

They were faced with the problem of reaching the different departments.

“Fermo proposed we become a part of the safety fair. It’s a fair that is mandatory for all employees that is held twice a year and we would be able to get the biggest representation of the floors,” Bisese says.

“The team pulled together and trained staff on infusion pumps and hospital beds during the safety fair; manning the table for 12 hours a day for three days. The staff was very receptive to the training and even learned extra functions of the equipment. For example, the staff was unaware the beds had back-up batteries and can function unplugged. We saw an immediate decrease in work orders and the team had fun with the interaction they had with the departments. This is a great example of the innovative spirit the CE department at Chesapeake has,” Bisese adds.

Outside of work, Bisese serves on the board of the Virginia Biomedical Association.

Bisese sums up the team’s approach in a favorite quote by Albert Einstein: “We can’t solve problems by using the same kind of thinking we used when we created them.”

It is that type of thinking that benefits Chesapeake Regional Healthcare’s clinicians and patients every day.