Posted By: K. Richard Douglason: December 01, 2017In: Magazine, Professional of the Month, Spotlight 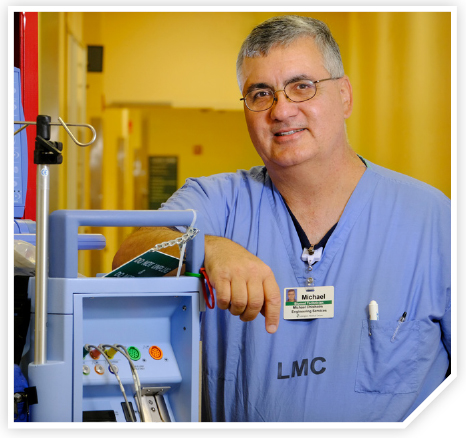 The Coach Takes on Challenges

The HTM profession seemed to be a lot tamer than what he was doing many years ago, according to Michael Chisholm, a BMET in the biomedical services department at Lexington Medical Center (LMC) in West Columbia, South Carolina.

“When I was in college, I was working security at Beth Israel Deaconess in Boston and I came upon the biomed department. I found out they needed someone to do PMs at night and since I already had a certificate in computer repair, and was majoring in electrical/electronic engineering at Wentworth Institute of Technology, right down the street from Beth Israel, they made me an offer to work as a biomed performing PMs.”

“As long as I completed the PMs, I could study and I found the job to be a whole lot safer than wrestling with drunk and drugged patients in the ER,” Chisholm says.

He ended up working at Beth Israel Deaconess from 1985 to 1989. He coordinated the PM program and was assigned to all critical care units.

Chisholm realized, after a year of working as a biomed, that this was his true passion. He liked the hospital environment and being a part of the patients’ care.

Much of Chisholm’s biomed education came from attending technical training schools and on-the-job training. He took it upon himself to study anatomy and physiology, since the college curriculum he took did not cover those areas.

“I worked with some outstanding biomedical techs when I first started at Beth Israel Deaconess and working in a teaching hospital afforded me some unique training opportunities not found in non-teaching facilities,” he explains.

After working for Deaconess, Chisholm worked as a field service engineer for TRW Medical Electronics, which became Amsco Engineering Services (AES) and he covered hospitals and OEM equipment throughout all of New England.

In his current position with Lexington, he serves as project coordinator, critical care specialist, Spacelab ICS administrator, IT integration specialist for medical devices and a mentor for University of South Carolina biomedical engineering interns who work at LMC.

Not only does working as a biomed create some challenges on a regular basis but life can throw us challenges as well. Chisholm has dealt with both, and in one case; simultaneously. He remembers one project that was a little more demanding than others back in 2005.

“We just put on a $200 million expansion of all new operating rooms, PACUs and eight-story towers for patient floors, as well as an additional 18 beds of SICU,” Chisholm remembers.

“One area that was really challenging was the PACU. I had to install bedside monitors and thin client PCs on 10 pneumatic booms with a very small work space,” Chisholm says. “I was able to use a 24-inch counter post mount from GCX, and from there, I was able to mount the Spacelab Monitor and the thin client PC all on the one mount.”

He says that the PACU area also had 16 beds with wall space and he was originally given about two-feet of wall space to install the bedside monitors and PCs. That was before a change in design reduced the space to 18-inches. 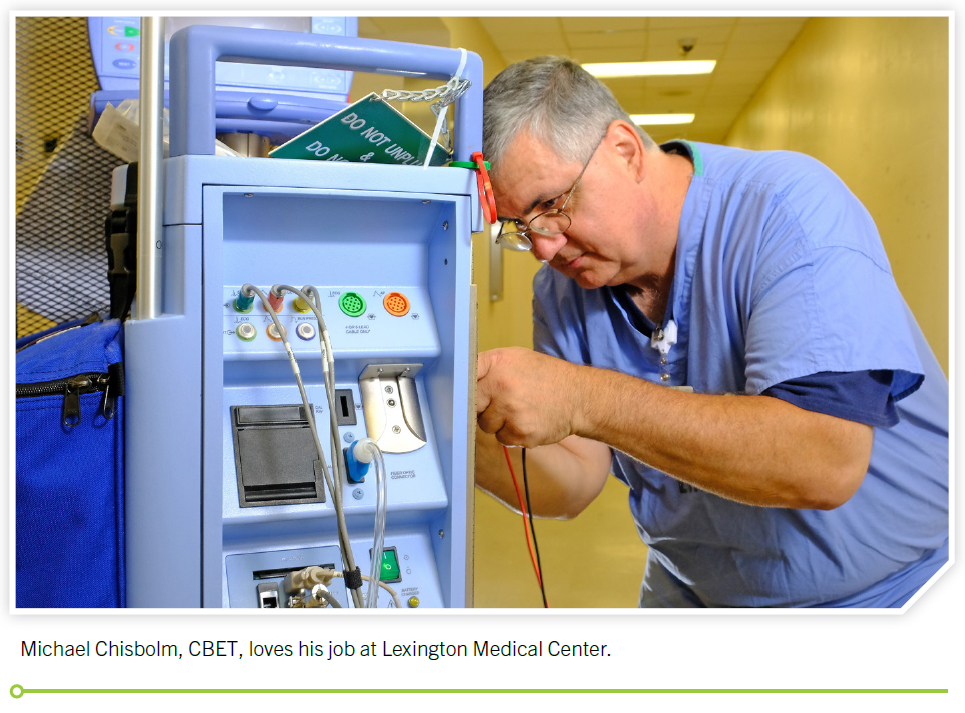 “This dramatically reduced the spacing so I had to change my plan and order 55-inch wall channels and move my power and network up higher due to the gas lines that were added in my space as well. Over all for the PACU, we ordered $35,000 worth of mounting equipment. This area was really demanding, due to the space and systems we had to mount the equipment too,” Chisholm adds.

During this project, Chisholm was diagnosed with prostate cancer in October of 2005.

“I had just had some blood work done to check my PSA and the numbers were very high,” he says

“Initially, my doctor did not think much of it but still sent me to a urologist. He did some tests and did not see any tumors in the ultrasound images, so he took a couple of biopsies and told me I would not need a follow up appointment and that they would call with the results,” he recalls. 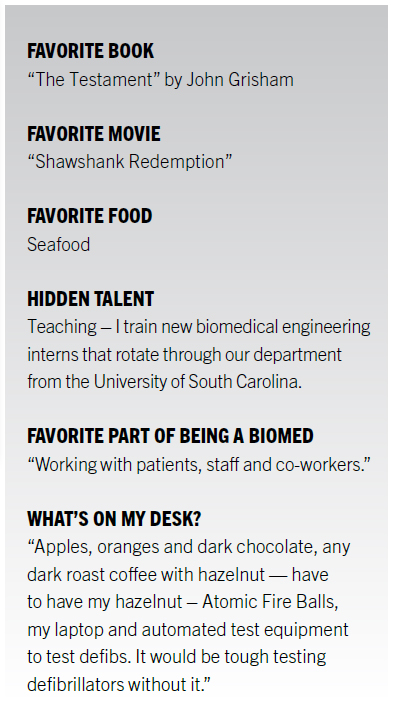 “A week later, I was called and told I needed to come in and meet with the doctor,” he adds. “I kind of knew something was not right, so the day before my appointment, I looked up prostate cancer so I would have some idea of what he would be talking about. Sure enough I met with the doctor and was informed that I had prostate cancer and there were cancer cells in my left side sample from the prostate; the test showed this is to be an aggressive cancer and my doctor would like for me to have radiation and chemo.”

Chisholm met with the radiation medicine oncologists and was immediately set up for 48 treatments of radiation and four rounds of chemo.

“After talking with some family doctors, they encouraged me to check into the surgical option, so I contacted Beth Israel Deaconess in Boston, since they have a top-notch surgery approach,” he says.

“So, at this point, I came back and started the process of handing off the project to one of my coworkers and brought him up to date on all that had been done and what remained to be done,” Chisholm says. “On December 17, my family and I, along with our dog, moved to Boston for a month. On December 23 after five-and-a-half hours of surgery, I was informed by the chief resident of urology that I was very lucky, I had a very large nodule in my left prostate and it was good that I had surgery when I did, considering that in October, two-months prior, there was no nodule visible at all.”

“This was one of the most stressful moments of my life, trying to make sure the project was on track, and trying to make the right decisions for my cancer care was a bit overwhelming at times,” Chisholm says.

Besides dealing with some big challenges, Chisholm has garnered something of a reputation because of his focus on teaching.

“I received a LEXY Award here at Lexington Medical Center,” he says “Every year, departments, groups of people and individuals are recognized for outstanding contributions to LMC. I received the award for Service Champion. I have a nickname ‘coach.’ I was recognized for always being ready to ‘coach,’ whether it is an intern, co-worker, RN or physician; I am willing to help teach new processes or help someone understand a new device.”

He recently was recognized by AAMI for a Bright Idea and an article was written about his idea.

Chisholm and his wife, Michele, have a son and a daughter. Next month, the couple will celebrate 30 years of marriage.

Sticking with biomed turned out to be a fulfilling choice in the long run.

“I love what I do and look forward to coming to work each and every day with the challenges they bring,” Chisholm says.

Chisholm looks forward to more opportunities to coach others and continue a tradition of sharing information.