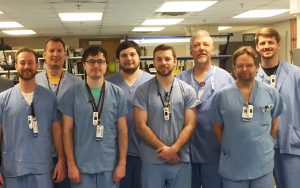 In and around the city of Minneapolis is a health system that provides health care to hundreds of thousands of residents.

The 16-member biomedical engineering department works in two units to support several facilities spread around the city, on both sides of the Mississippi River. Headed by Manager Rodney Nolen, the shop covers general biomed with specialties in dialysis and anesthesia/operating room.

“The majority of the staff stay at their respective shop most of the time. However, technicians float from hospital to hospital based on needs and specialty. For example, I have only one technician trained on a specific model of gas machine, so he supports that machine at all sites like the GE MRI machine. I also have only one technician trained on Medivators, so he supports them at multiple sites. Also, in times of shortages of staff, they float back and forth as needed,” Nolen says.

Service contracts include parts only, some are first-call and some full service. Nolen says that biomedical engineering manages all contracts. 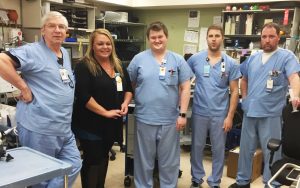 This department has taken on projects and troubleshooting challenges and has proven to be very resourceful in the process.

“In March of 2017, a rollout of hundreds of capnography units was accomplished to support the clinical emphasis on post-surgery capnography monitoring,” Nolen says. “This is a new national focus to decrease code events, anesthesia side effects after surgery. These monitors are networked with nurse and ASCOM phones to provide real alarming directly to the caregiver’s handset.”

“We have fully implemented capnography usage on all post-anesthesia patients here at MHealth. These devices are connected to the ASCOM via the nurse call system so that when they reach an alarm state, the alarm will go directly to the phones the clinical staff carry around with them,” Nolen adds.

The department realized that one particular challenge to this project was the interface cable from the monitor to the nurse call jack. The monitor OEM did not provide this cable so the team had to either make them or find a third-party company that could. They ended up accomplishing the cable interface using an outside source.

Opening the doors of a new facility can be a big task as well. The HTM team played a major role in getting all the medical equipment in place to make it happen.

“We also recently completed our work in opening the new MHealth Clinics and Surgery Center. This is a state of the art surgery and clinic center,” Nolen says. “The facility is fully integrated with equipment and patient location technology as well as advanced technology operating room suites.”

“In order to get this facility opened, we moved and/or installed more than 1,800 devices in a two-week timeframe. We participated in pre-construction, construction, and implementation meetings for the building construction. We attended many equipment selection meetings to provide technical and advisory input on all medical devices placed in the building. We provided technical guidance and advice to the construction team as needed. We also planned and implemented the equipment installation timelines and ensured they were met on time,” Nolen adds.

Problem solving to aid patients and clinicians has been a part of the team’s agenda as well and they have problem-solved in that capacity successfully.

“Over a period of many months, we gathered data with clinical teams on Baxter Sigma infusion pump failures and work orders in an attempt to reduce failure and increase patient satisfaction at the bedside because pump failures have a direct impact with patients and families,” Nolen says. 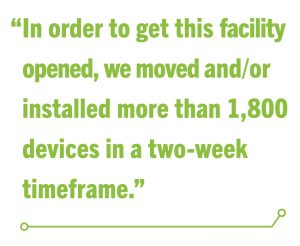 “We have identified a pilot nursing unit and we are responding to all of their calls immediately to help identify the root cause of the patient care delay. The reason for this immediate response is that we often would receive the pumps and could not duplicate the problem the clinical staff had seen at the bedside. This focused-response pilot has greatly helped to identify a significant battery issue and also some nurse training opportunities,” he adds.

Nolen says that the team identified two major issues that were causing failures. The first was a cleaning issue related to the battery module and fluid causing degradation of the actual battery terminals. The find resulted in a change in the cleaning process and PM checkpoints. The second finding was an upper line issue that identified a clinical staff training opportunity which resulted in a reduction of nurse alarms and ultimately false work order activity for pump failures.

“My department has also taken a very proactive approach to helping reduce C. difficile in the patient care areas. This is a hospital focus and it was recognized that biomedical engineering had some opportunities that could positively impact the hospitals’ overall C. diff goals,” Nolen says.

“All of my staff have attended special training to understand how a technician can impact the patient when they enter a room or remove equipment without following all of the necessary precautions,” he adds.

Another area that the department has given special attention to is the alarms patient safety goal regarding alarms along side the clinical staff.

“We have been members of multiple groups and committees looking at our monitoring settings and determining if they can be adjusted to reduce the amount of nuisance alarms,” Nolen says. “This work almost always results in the biomedical engineering department having to touch every single monitor and make the needed upgrades.”

Nolen says that as a result of the alarm work, they realized that they had a variation in the level of software that had been installed on the monitors in the different patient units, and, in some cases, the software versions would not support the new baseline decisions that were made for alarms.

“So, as a result, we are currently undertaking a major software upgrade to all monitoring software to ensure that we’re on the same version and platform,” he says.

Members of the department are also active in HTM away from work.

“Most or all of my staff are members of the North Central Biomed Association. I am also the co-chair of the ACCE education committee as well as a board member. I am also a member of AAMI,” Nolan says.

Regardless of what side of Ol’ Man River that patients live on, they can be confident that the medical equipment at the University of Minnesota Health is being maintained by the best.