Posted By: K. Richard Douglason: January 01, 2017In: Magazine, Professional of the Month, Spotlight 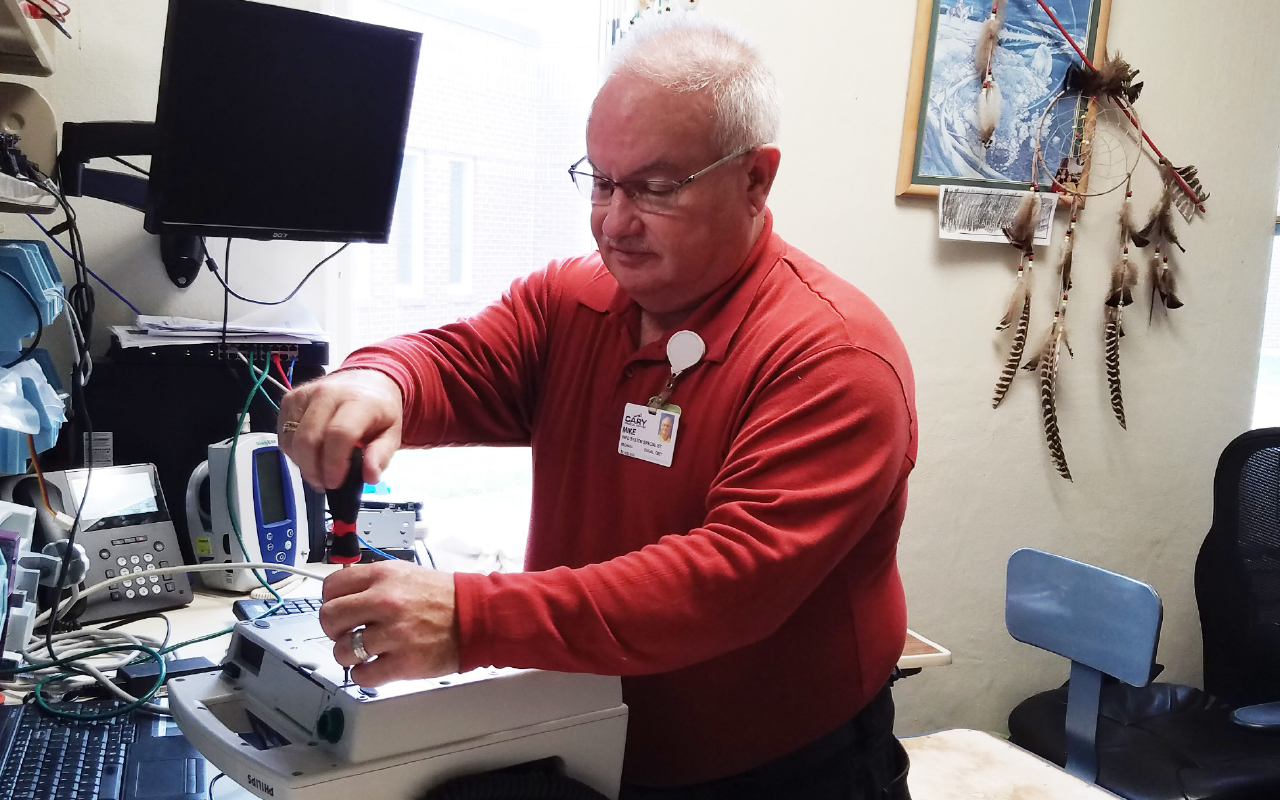 Mike Dugal CBET, BSIT is in his 27th year as a Biomedical Technician.

Very often, while profiling a biomed as our Professional of the Month, there is a description of how that HTM professional took a circuitous route to becoming a biomed. It isn’t always cut and dry. Many biomeds train for one occupation, and may work in another field initially, before finding their way to the HTM profession.

Back in 1990, Michael Dugal, CBET, BSIT, learned how that can happen. Dugal had spent a few years in the Army in the 1970s and then took classes through a community college to earn an associate degree in electronics.

After getting his degree, he went to work for three different large computer companies and remained in that line of work for the next 27 years. He had grown up in northern Maine but left the area when he took the first job. In 1990, he decided it was time to return with his family to where he grew up. He got a job in the Maintenance Department at Cary Medical Center in Caribou, Maine. His wife, a nurse, had already accepted a job in the Special Care Unit.

“The hospital quickly discovered that I had an associate degree in electronics and I was asked to fix a few pieces of medical equipment, as we had a contract with Technology in Medicine and the technician was only here once every two weeks,” Dugal remembers. “My manager saw an opportunity to get rid of the third-party service and have an in-house solution. So, less than three years from my initial start date, I became the biomedical technician at Cary Medical Center.”

His fellow biomeds, outside of his facility, proved to be great resources for an electronics guy who just became the sole biomed at a hospital.

“Because I was the first dedicated in-house biomed at Cary Medical Center, I had to ‘grow’ the program. I created documentation – procedures, policies, databases, etcetera – for our program. I contacted Gary Harmon, the Clinical Engineering Director at Maine Medical Center in Portland and other nearby hospitals to see what worked and to acquire their documentation to use as an example. I then created what we needed to operate as a biomed shop,” Dugal says.

Back at that time, Dugal had approximately 800 assets to maintain. He also took care of telecommunications equipment and some computer equipment because of his experience. 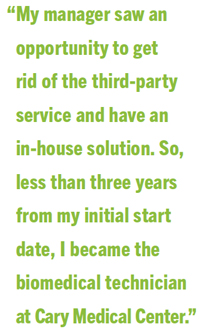 Ten years after beginning at Cary, Dugal’s current boss, who is the CIO, took over the biomed department and hired Dugal for the IT department. They then contracted with GE Medical for the next 10 years with the understanding that Dugal would oversee biomed. He still did device repair and helped the GE tech with equipment that Dugal had more experience with. He also continued maintaining the telecommunications equipment, as well as computers and networking.

Dugal’s unique blend of experience and education allows him to straddle the HTM-IT divide with confidence in both areas.

“One major challenge I have encountered is to balance my time between biomedical duties, telecommunication duties, and IT/networking duties,” Dugal says. “I may be installing a new IP phone for someone and programming their voicemail one minute and get a call to go up to the operating room ‘stat’ for an OR table malfunction. Or I may be installing and configuring a new network switch and have to leave that to fix an electrosurgical machine or a telemetry unit.”

Dugal says he has a sign on his door that reads; “When it comes to safety, I maintain all equipment like my family’s life depended on it.”

“The biggest challenge is to balance my time and still maintain a high level of maintenance with the emphasis on safety,” he says. “I use all of the hospital’s resources, i.e. the Maintenance Department and my IT coworkers to assist me when the work piles up. They have been very helpful and I could not do it without them.”

In 2007, he acquired a bachelor’s degree in IT with an emphasis on networking and then acquired Cisco CCNA certification.

“In 2010, I was asked if I would be interested in taking on the biomedical position again and the hospital let the contract with GE Medical lapse,” Dugal says. “I would still have to perform my IT and telecommunication duties. This would present a challenge, as our inventory had grown to approximately 1,000 pieces of equipment. The GE biomed was, at the time, full time at Cary Medical. I had to pretty much start over as I did at the beginning and help organize the department.”

With the help of the CIO, they acquired test equipment and a new inventory management system.

Away from the Medical Center 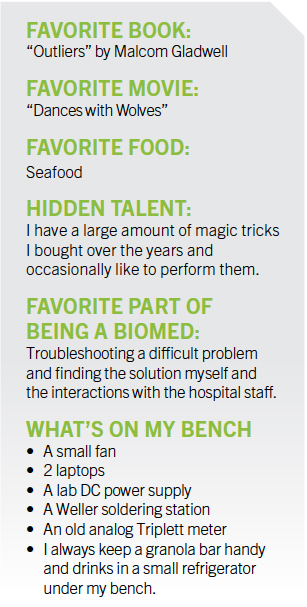 Away from work, Dugal’s time and avocation runs from making people laugh to helping people learn.

“I am currently an adjunct teacher at the University Of Maine in Presque Isle Maine. When there is a need I teach two classes; Database Management and Project Management,” he says.

He has also been a Shriner clown for about 14 years. And, he has coached girls high school soccer for 13 years. He also enjoys the outdoors.

“I love going out on the trails with my UTV. I especially like to fly my drone and take pictures of the beautiful landscapes in Northern Maine,” Dugal says.

After doing biomed work for 28 years, Dugal plans to retire at age 62. That is not too far off. The inventory, which was once 800 assets, has grown to 1,200, excluding diagnostic imaging and anesthesia equipment. Dugal reflects back on how things have progressed after first getting his electronics degree and his upcoming retirement.

“That will mean that I will have been a technician for 44 years. From troubleshooting with oscilloscopes and analyzers to just popping boards out and replacing them, it has been an adventure,” he says.

“I strongly believe that ‘the dash between the dates’ is indicative of your true character. I try to live a humble life, but I am proud of what I accomplished through the years. I could develop an ‘I don’t care attitude’ because my time to retirement is short, but I will finish strong. I made a commitment to my boss that I will help the hospital transition to however they decide to replace me,” Dugal adds.