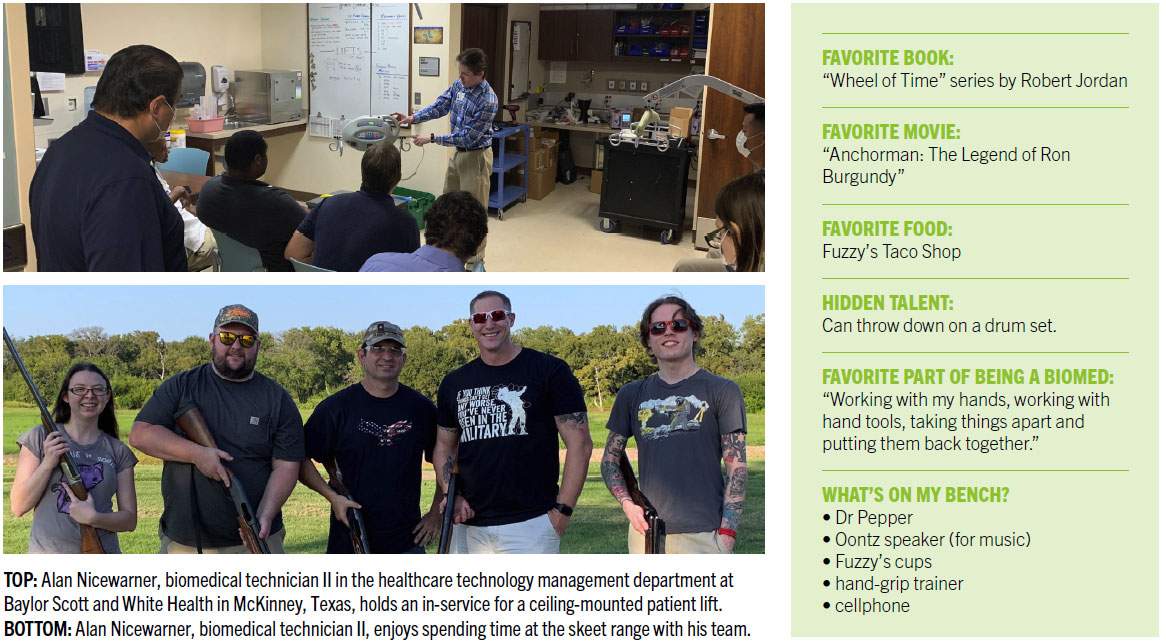 Professional of the Month: Alan Nicewarner, Working with His Hands

Posted By: TechNation Development Teamon: January 31, 2021In: Magazine, Professional of the Month, Spotlight 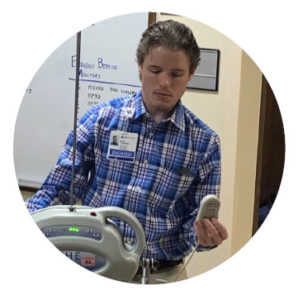 Basketball legend Shaquille O’Neal once told sports reporters that he wanted to be known as “The Big Aristotle because Aristotle once said, ‘Excellence is not a singular act; it’s a habit. You are what you repeatedly do.’”

Alan Nicewarner, biomedical technician II in the healthcare technology management department at Baylor Scott and White Health in McKinney, Texas, might be referred to as the biomed that fits Aristotle’s quote; if you ask his boss.

His boss says that Nicewarner is thorough in his work and extremely detailed in everything he does. That sounds like the kind of person that Aristotle and O’Neal had in mind.

Despite turning out to be a very good biomed, Nicewarner didn’t start out with biomed as his first ambition.

“Mostly stumbled into it,” he recalls.

“Tried one year of electrical engineering at the University of Kentucky; decided it wasn’t the thing for me. Thought maybe I’d follow my grandmother and aunt into the medical field, but when speaking to a medical college recruiter, none of the typical medical profession paths appealed to me,” Nicewarner says.

He says that then, the recruiter asked him if he liked working with his hands and electronics.

“I did; I’d taken apart video game consoles and handhelds as a teenager, mostly out of curiosity, sometimes to self-repair. So, the recruiter pointed the way towards a (at the time) fresh new medical field; biomed,” Nicewarner says.

He attended technical college; Spencerian College in Lexington, Kentucky. The college closed its doors a few years after he graduated.

“Covered troubleshooting methodology, basic equipment networking, AC circuits, DC circuits and digital circuits. Started with the small components at the board level and worked from the ground up to complete medical equipment,” Nicewarner says of the training curriculum.

He says the program also covered medical terminology, anatomy and physiology, and basic medical safety practices so that students could integrate into the medical field easier as a technical professional.

He says that his area of specialty is dialysis which grew out of his four and a half years working with DaVita covering acute hospital contracts and chronic DaVita dialysis clinics.

“I was responsible for maintenance, repairs and PMs on Fresenius 2008 series dialysis machines. Also, the RO (reverse osmosis) water treatment machines used in the hospitals; as well as the RO system, holding tanks and water loops running throughout the DaVita chronic facilities. Got pretty good at diagnosing dialysis machine issues; sometimes could diagnose pump and motor issues just by listening to the machine as it ran a rinse cycle,” Nicewarner says. 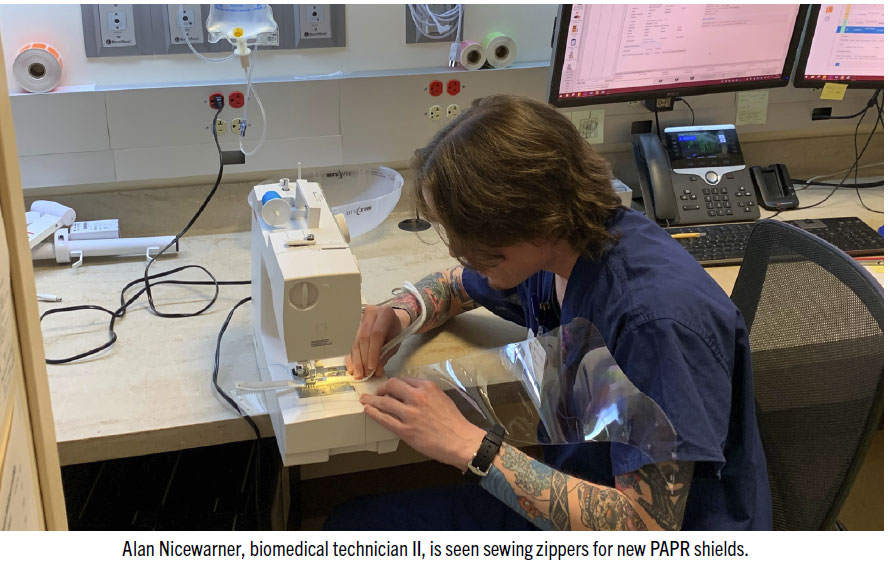 When asked about any special projects he has been a part of in recent months, his response reflects the unique circumstances that so many of his colleagues have experienced.

“Not sure I consider this ‘special,’ since I’m sure hundreds of other biomeds around the world have had to do the same thing; but assisting with the unexpected preparations for COVID-19 in the hospital is the most notable project I’ve contributed to,” Nicewarner says.

“Suddenly pulling all backup and spare patient monitoring to be used in PUI/+ patient rooms. Getting units that sat in storage for months, determining if they are ready for use or not. Dealing with sudden part shortages as every hospital in the world started ordering thermometers, temperature probes, PPE and disposables,” he adds.

He says that another unique task was having to figure out how to fix broken PAPR helmet shields as caregivers that had never had to wear one before subjected the helmets to physical damage and/or improper handling.

Nicewarner has several hobbies that keep him busy when not on the job. They run the gamut from music and books to custom computers.

He enjoys PC gaming and has a large Steam library collection, including VR.

“Probably have spent an unhealthy amount of my life with my eyes glued to my computer monitor,” Nicewarner admits.

He also enjoys everything from LEGOs to chess. He says that he participated in tournaments when younger and now the strategy game is just for casual fun.

Another pastime is reading books.

Some titles worthy of mention include: “Sword of Truth” series by Terry Goodkind, “Coldfire Trilogy” by Celia Friedman, “The Warlock” series by Christopher Stasheff, “Something Wicked This Way Comes” by Ray Bradbury, and “Slaughterhouse-Five” by Kurt Vonnegut, Nicewarner says.

He enjoys music, which he attributes to learning music theory and exposure to musical instruments.

“Six years of public school band and four years of high school marching band really taught me the value in music. I can listen and enjoy just about anything,” Nicewarner says.

On the computer front, every couple of years, he says that he builds a new, better, faster (read: more expensive) PC for his PC gaming needs.

“Completely unnecessary; PC hardware has nearly always been ahead of video game processing and graphic demands. But there is something fun about opening a dozen boxes full of computer parts and putting it all together, getting all the cable connections hooked up, powering it on and bathing in LED RGB light while waiting for multiple tense minutes to see if the newborn PC makes it to post,” Nicewarner says.

The clinicians and patients in McKinney, Texas can be thankful that this HTM professional is thorough in his work and extremely detailed in everything that he does. Retailers of computer parts can be thankful as well.