Posted By: TechNation Development Teamon: October 31, 2021In: Magazine, Professional of the Month, Spotlight 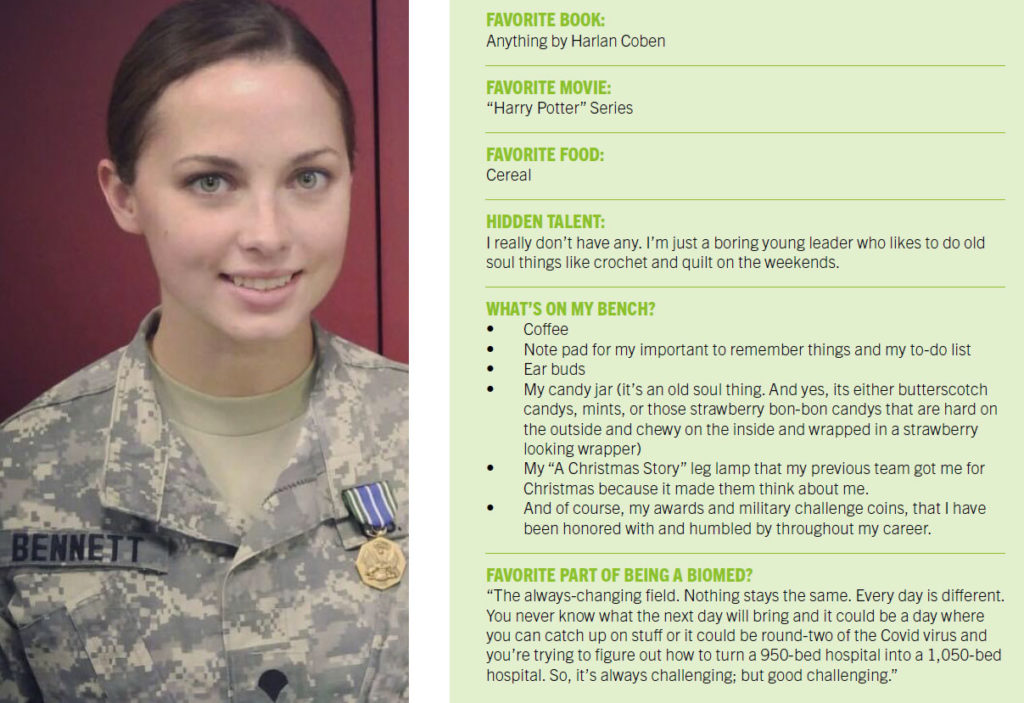 Every year, the Association for the Advancement of Medical Instrumentation (AAMI) chooses a “Young Professional of the Year” to be recognized with an award.

AAMI says that the award is “presented annually to a professional under the age of 35 who exhibits exemplary professional accomplishments and a commitment to the health care profession.” The award comes with a $1,000 check and plaque, which has normally been presented at the organization’s annual conference.

The 2020 Young Professional award winner was Angela Bennett, a senior area general manager/site director with Sodexo in West Virginia. Bennett was with Trimedx at the time she won the award.

Bennett started her health care career on the clinician side. She received her training in the military.

“I was working at a hospital as a patient care technician (PCT). I was working alongside frontline nurses and taking care of our community’s loved ones. I was working on my degree to be an RN, so to start out as a PCT, was beneficial to me because I learned so much about the health care system, and the nurses I worked with, were willing to teach me everything they knew,” Bennett says.

She says that she quickly realized that nursing school was expensive.

“I had been told that the military was hiring, and all they needed was for me to make a life sacrifice and for me to sign on the dotted line, and they would help me with my nursing school education cost. I was honored to be able to serve on a larger scale. I had my heart set on being a 68C (Army Practical Nursing Specialist), as it was close to nursing, and I felt I would get good experience so that when I got out of the Army, I would be ahead of the game,” Bennett says.

She says that despite this, the powers that be thought the nursing path was not for her and let her know that 68C was not an option at the time, so she said “anything in the medical field will do.”

“The recruiter said, ‘How about a biomedical equipment technician (68A)?’ I didn’t know what that was or what it entailed. All I knew was the training was close to home in Texas, and was 11-months long, so I said ‘OK, I’m in!’ From there, my HTM journey and career began. I began my career in the HTM field with no knowledge of what it was or what I was going to be doing. All I knew is that it felt right. Little did I know I would fall in love with it and never look back,” Bennett says.

She then went through the Medical Education and Training Campus (METC) 68A program at Fort Sam Houston.

Later, she enrolled in the Thomas Edison State University Bachelor of Science in Applied Science Technology in Biomedical Technology program.

Bennett started her career as a BMET 1 with Trimedx in Kalamazoo, Michigan.

“I was with Trimedx for a little over five years, and when I left, I was a senior site manager/site director at the hospital I started out as a BMET I. I worked my way through BMET II, lead technician and supervisor before landing my dream job as a manager/director. In May 2021, I made the decision to change companies and I am currently the senior area general manager/site director with Sodexo in West Virginia,” she says.

Do What You Love and It’s Not Work

In addition to managing the day-to-day responsibilities of her area, Bennett has enjoyed being involved in special projects.

“Projects are my favorite. I love to be engaged and help out when I can. It’s even better when I can be part of the planning stages and have a say in how things are installed or give feedback on what will work and not work in a space. I love watching it all unfold, and then the final product being revealed is so rewarding,” she says.

Bennett says that all the hard work, planning and time that goes into a project pays off when you get to admire something you were a part of achieving.

She says her military service gave her the ability to take a large project and break it down into manageable tasks.

“After the first successful project, I was the point of contact for the rest of the projects I was a part of and became an asset to the project managers and the project,” Bennett says.

Away from work, Bennett keeps busy making, or remaking, things.

“I love to renovate and remodel. Every house we have lived in, I’ve changed something or remodeled something. It allows my creative side to come out and I can learn new trades. So far, my favorite part is demo day. I also quilt and crochet. Like old lady style, in my rocking chair recliner with my hot tea on the side table and glasses down on the tip of my nose, quilting and crocheting,” she says.

“I have a loving and very supportive husband and we have been blissfully married for six years. We have a very smart, almost too smart for his own good, three-year old little boy,” Bennett adds.

She says that the best thing to know about her is that she loves what she does. She embraces the old Mark Twain adage about doing what you love and not having to work a day in your life, and that idea really stuck with her after she heard a high school English teacher say it.

“The next thing I have learned from my life experience; show appreciation and recognize those who have helped you and who have bent down to help you up. You never know how little effort it takes to be kind and show appreciation for those around you. I sincerely and wholeheartedly love what I do and I have compassion for it. And it shows in my day-to-day interactions with my team, my peers and my leaders,” Bennett says.

Bennett can employ those life lessons in future achievements as well.