Professional of the Month: Elvin Velez

Posted By: TechNation Development Teamon: June 01, 2022In: Magazine, Professional of the Month, Spotlight 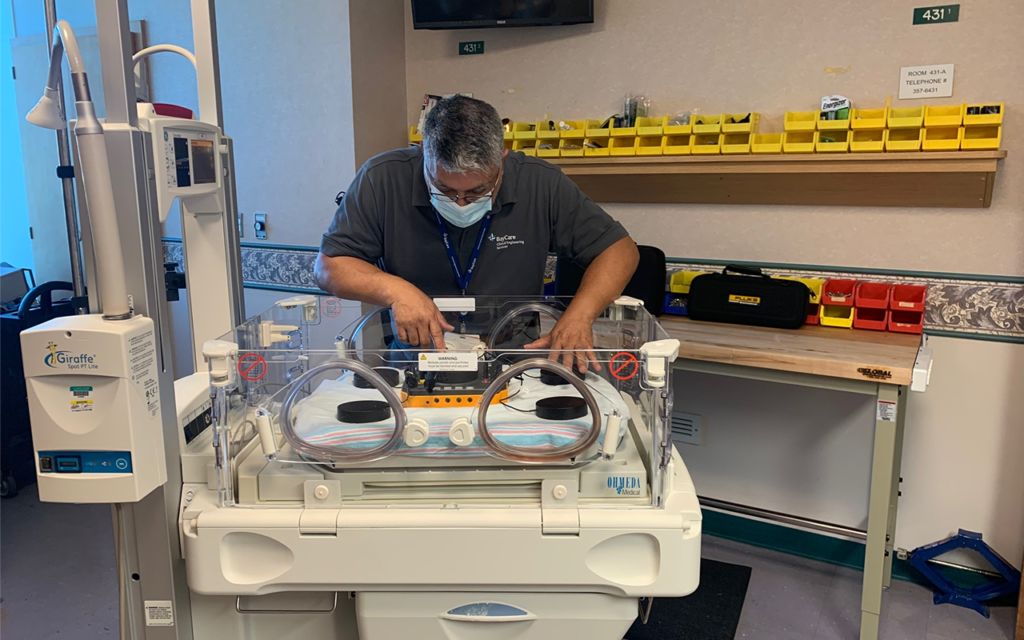 For years, vacationers and snowbirds have enjoyed traveling to the Tampa Bay area on the West Coast of Florida. The city of Tampa is the largest city in the area of the bay. Other cities include St. Petersburg and Clearwater. Old Tampa Bay and Hillsborough Bay form Tampa Bay.

There are water sports, beaches and entertainment for visitors. The area is also home to several professional sport teams and boasts good areas for raising families along with a mild climate.

BayCare is the leading not-for-profit health care system serving the health care needs of those in the Tampa Bay and West Central Florida regions. The system includes 15 hospitals.

One HTM professional who works at the system’s main St. Joseph hospital campus in Tampa is Elvin Velez, BMET II.

Velez knew early on that he wanted to work in a technical or electronics role, but it was a move to Florida that really put him on the path.

“I moved to Tampa in 1997 from Staten Island and was having difficulty finding a decent job and my wife suggested I go to ITT Tech where I had some family attending,” Velez says.

He says that he was always interested in electronics and started studying and received a degree soon after.

“I was looking for a career after moving to Florida from New York. A family member enrolled in ITT Technical Institute and suggested I attend. I enrolled in the electronics engineering program and earned a bachelor’s degree. I’m grateful for the education that I received from ITT Tech. The skills I learned from ITT Technical Institute led me to a wonderful career as a biomed,” Velez says.

Even with a degree in electronics, Velez didn’t immediately enter the biomed field.

“Once I graduated, I started repairing thermal printers at Ticketmaster. After a few years, I got my first opportunity in the HTM field repairing respiratory devices for Mercury Medical. After about seven years, I had a great opportunity to work as an in-house biomed at St. Joseph’s Hospital/Baycare,” Velez says

Since earning his degree, he has worked as a bench technician repairing respiratory devices such as blenders, ventilators and anesthesia machines at Mercury Medical and worked in biomedical engineering as a BMET I and II at St. Joseph’s Hospital. His areas of specialty include central supply, telemetry, EKG and Philips V60 ventilators.

As every biomed knows, the job isn’t limited to PMs, repairs and calibrations. There is often new construction or equipment change-overs that depend on the HTM department for specialized skills. Velez has been a part of these challenges as well.

“Having been at St. Joseph’s Hospital for over 13 years, I have been involved in many projects. One of the major projects I have been involved in was a complete transition of our telemetry system from Philips to GE. We spent several weeks setting up the new monitoring equipment, testing and deinstalling the old equipment while minimizing the impact to patient care,” he says.

He says that when the health care system built a new hospital in 2010, the CES team was responsible for setting up all the new equipment prior to the grand opening.

“This was a major undertaking and took over a month to complete. During construction of the new hospital, we were responsible for unboxing and setting up the new patient care equipment. This entailed adding the equipment into the database, performing electrical safety tests and ensuring the equipment was functioning properly and was patient safe,” Velez says.

When not engaging in these special projects or performing other biomed duties, Velez uses his technical skills off the job.

“I like working on cars, reading comics and Manga and watching Korean TV shows. I enjoy auto mechanics, working on engines and transmissions. I like building bicycles, model cars and planes. I like to be outdoors around nature and going to the beach,” he says.

Velez is happy to work in the HTM field and would like to give back to the profession by passing his knowledge and experience on to those newer to the field.

“I just want to help mentor the younger generation of HTM professionals and share my knowledge with others. I moved to the United States from Puerto Rico in 1983 and am grateful to work in the United States and the opportunities that I have had. I love the HTM field and working for a great organization,” he says.

With that kind of mindset, the biomed trainees and medical equipment at BayCare are in good hands.