Professional of the Month: Francis Lewis, CHTM – Grateful for Mentors and Team Members

Posted By: TechNation Development Teamon: October 01, 2021In: Magazine, Professional of the Month, Spotlight 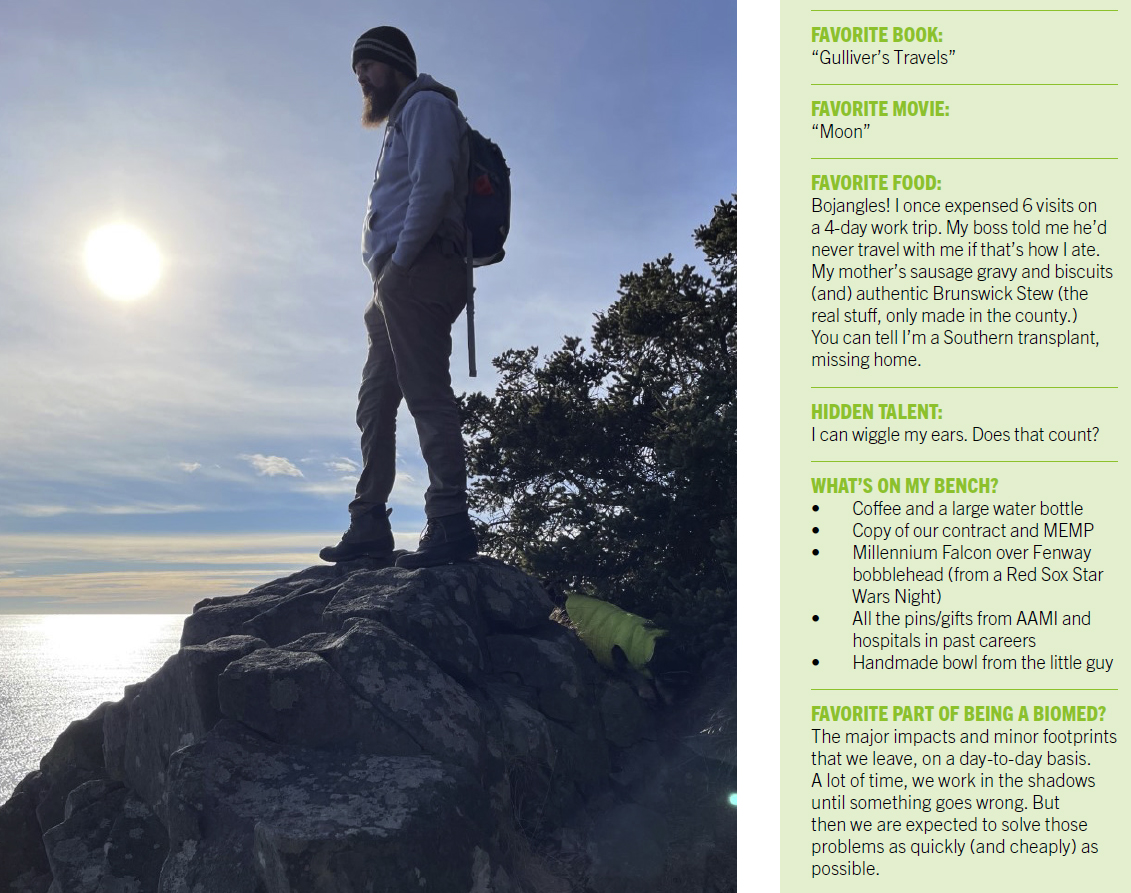 Sometimes, the job precedes the training. That is the way it turned out for Francis Lewis, CHTM, healthcare technology management (HTM) director for Sodexo Clinical Technology Management in Lewiston, Maine.

Lewis didn’t exactly put the horse before the cart, but he was anxious to get into the biomed field before getting the requisite degree. He says that Tim Bowers was the person who piqued his interest in HTM and made it happen.

“I was working as a telemetry tech while going to school to eventually become a nurse. While at work, this guy kept popping in to fix any issues we had – and he was always fixing any problems nurses had on any equipment; as biomeds do. We were friendly enough, and I ended up playing on a local social kickball team with him,” Lewis says.

At a certain point, the biomed was promoted to biomed manager and his BMET position became open.

“I’d casually ask him about the position each week, mention that I had medical courses done, and that I already knew all the staff and their personalities (knowing the ‘game’ is crucial). Well, eventually I interviewed and was given the position – with the caveat; I complete an associates in electronics,” Lewis remembers.

That was the only component of the job requirements Lewis didn’t have.

“I had anatomy and physiology and all entry-level nursing school classes done. But when I took my original position, I had to complete an associates in electronics. Tim was very supportive throughout my pursuit (even as the classes dragged on beyond my initial deadline, due to scheduling issues). He even made sure I developed hard skills that the instructor didn’t go over in classes,” Lewis says.

Lewis began his current position at the height of the COVID-19 pandemic last summer. It was a time that events like job transitions and interviews were mostly on hold. The restrictions at the time made assuming a new job more of a challenge.

“Well, there was this little issue that we all faced last year. On a personal level, I interviewed for and accepted my current role while in the middle of all of it. An opportunity came to be, as I had previously worked with the facilities director, and he suggested I apply. Thankfully, it all worked out. The transition was definitely a challenge, but one I welcomed facing,” he says.

In his current role as a director, Lewis sees staff development as a priority along with meeting the needs of the hospital. He sees his specialty as a manager who helps direct the careers of his biomed team.

“I prefer to train my team to be the specialists. It is my job to put them in their best positions to succeed and grow. And my job to execute deliverables, meet the needs and manage expectations of the client/hospital,” Lewis says.

“I have been to a handful of schools earlier in my career. But when I started working for vendors, I knew that management was the career path for me. And now my specialty is to help my team find and maintain their paths,” Lewis adds.

Family consists of his mother, three brothers, two sisters-in-law and six niblings (which he says is a fantastic term for nieces and nephews).

“I also have a long-term girlfriend that is expecting a ring at any moment, and her son calls me ‘Dad,’ ” Lewis says.

He says that he has been incredibly lucky throughout his career.

“I started off with a fantastic boss in Tim Bowers. He was a brand-new manager, and I was his first employee. I think we were both learning our roles at the early part of my career, and we still communicate almost weekly. He is unequivocally the best mentor I could have imagined having,” Lewis says.

He says that when he transitioned to vendor service, he was lucky enough to meet Carl Genereux.

“He has been my confidante and helped me survive in New England all these years. And then I met John Doherty; a former manager riding off into the sunset (post-retirement). So, as I transitioned roles, I managed to find folks that helped me develop my own career path, expectations and rationale of how I would handle those transitions as they came my way,” Lewis says.

“I mention all that to say, I cannot talk about myself without mentioning the people that helped me along my career – and the people that help me continue that career, even now. Not the least of which is my team; that I get to work with, and work for, every day,” Lewis adds.

“I’m just a conduit, I try to put them in their best positions to develop and grow, while managing their workflow and stressors as best I can,” he concludes.

From putting the horse before the cart to making the biomed staff’s future a priority, this HTM director went from having some things slightly out of order to putting things in perfect order.