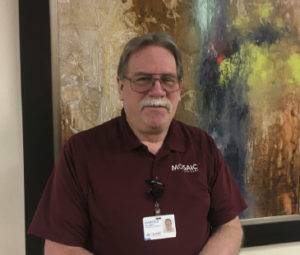 A little more than a five-hour drive from St. Louis and due north from Kansas City, is the city of Maryville, Missouri.

Northwest Missouri State University is in the northern portion of the city. Mosaic Medical Center-Maryville is further south. The medical center offers a full spectrum of health care services including cardiology, an emergency room, maternity, respiratory care, an ICU, imaging and more.

A healthcare technology management (HTM) professionals who made AAMI’s “HTM Standouts” list in 2018 works at the medical center.

Harold L. Duryea, CBET, is a member of the biomedical engineering department as a BMET III.

Duryea’s road to an HTM career began indirectly thanks to his brother-in-law.

“I was working in industrial maintenance at a glass plant and he had a business selling chiropractic and physical therapy equipment at the time. He wanted someone to run his repair shop and asked me if I might be interested. Since I was already taking classes at the local junior college in AC and DC power and electronics, I told him I’d think about it. I even took a trip to Virginia to check out his facility,” Duryea remembers.

He says that while he was on the trip, they announced the sale of the glass manufacturing business and the closure of the facility.

“I changed my major to biomedical equipment technology. I didn’t go to work in Virginia either. I ended up working at a 26-chair dialysis facility as a machine tech while I went to school at night to finish my degree,” Duryea says.

He enrolled at Tulsa Junior College and majored in biomedical equipment technology.

“The curriculum included AC/DC electrical instruction, basic and advanced electronics, computer science, program writing, as well as the usual requirements for an associate degree. The main difference were three semesters of biomedical instruction. The course was taught by the owner of a local ISO that included medical salvage, as well as sales both domestically as well as internationally. As such, he brought in equipment for hands-on teaching, as well as theory and background,” Duryea says.

He adds that the coursework included anatomy and physiology, as well as cardiac function and the history and the development of ECG.

“Why have more biomeds heard of Einthoven’s Triangle than many new nursing students? His theory is that you have to know how it works before you can repair it,” Duryea explains.

He later earned a bachelor’s degree in health administration. 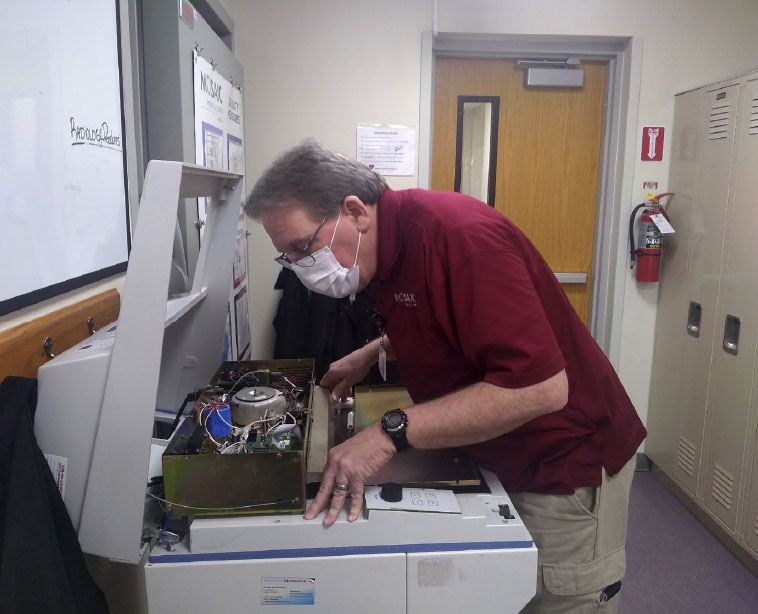 Ignore the Things that Work

As a biomed, in addition to making repairs and routine maintenance, there are also challenges to overcome. What challenges has Duryea faced as an HTM professional?

“The easy answer to this one is COVID. Like everyone else, we’ve had to deal with cutbacks in hours, wage freezes, area restrictions and the usual things associated with a health crisis. What wasn’t expected was all the delays in getting parts, shipping issues and getting tech support. Many businesses were shut down and unable to be reached,” he says.

Duryea says that some suppliers were either not open or unable to get the parts needed to build the parts he needs.

“I have some parts I ordered in August that show a current due date of March; and that may be pushed again. It’s ongoing, but every one of your readers is facing the same thing,” he says.

He says that of past challenges, the biggest one was EMR integration.

“The first time was the worst. It was integrating all of the systems with EPIC. EPIC was a good system, but it was our first foray into the world of HL7, and we had no idea what was involved. Being one of the smaller hospitals in the health system we were previously owned by, we got to be the test case,” Duryea says.

He says that every department had its issues, but for him, the OR was the worst.

“Eight percent of our anesthesia machines weren’t even capable of HL7, so we had to replace them with new ones. A silver lining on that one, as they needed to be replaced. Forty percent of the anesthesia monitors had to be upgraded, and then the interfaces had to be built, and then came the exciting part for me. Time for testing to make sure all the parameters were not only being transmitted, but in the correct format. Hours of testing as we had two models of anesthesia machines and two different manufacturers of patient monitors,” he recalls.

He says that they started testing and tweaking those systems three weeks before “go live” and discovered the actual go live was rather anti-climactic.

“It worked; not perfectly, but the changes required were minor parameter code errors that were easily fixed,” Duryea says.

He says that the biggest challenge after that was that biomeds weren’t given access to the system, but they were the ones onsite that everyone called whenever any of the nursing staff had issues with patient data not flowing into the chart.

“I blame this on corporate leadership rather than the program itself, and I have colleagues at other hospitals that love the system. When the health system sold us in April of 2019, we got to transfer everything over to another EMR system. Lots of testing again, but at least, instead of being on the other side of the state and inaccessible, headquarters is now only 45 minutes away and they answer their phones. Once everything was tested, and ready, issues have been minor,” Duryea adds.

Duryea’s efforts in the HTM field have been recognized, not only by AAMI, but also by leaders in his part of the country.

“I was chosen to be on the advisory board for the curriculum for the biomedical equipment technology program and related fields for Tulsa Community College,” he says.

Away from work, Duryea enjoys weekly “eat and rides” with his local motorcycle group. He also enjoys vacationing with his wife on their motorcycles and Civil War reenacting. In addition to his wife, his family includes a son and two grandsons.

He characterizes himself as a problem solver.

“I have no problem finding alternate methods to find a solution. I am not afraid to attempt to repair anything. If I have tools and a manual; I have discovered that most things are fixable,” he says.

“The first thing to remember is that most complex equipment is made up of smaller systems, so determine what is working and what isn’t. Then, concentrate on the section that isn’t and ignore the rest of the unit. Once you figure out that piece, there is a good chance the rest of it is fine,” he adds.

Since getting his biomed degree in 1996, there is something to be said for his voice of experience and his contribution to the Maryville community.