Professional of the Month: Neil Davidson, CBET – Standing Behind Every Decision

Posted By: K. Richard Douglason: August 01, 2018In: Magazine, Professional of the Month, Spotlight

Seventy miles east of Memphis is the city of Jackson, Tennessee. It is a city of over 65,000 people in the western portion of the state.

Davidson is a military-trained HTM professional and has been a biomed for 14 years.

“Now, I am the director of biomedical services for ReNew. I have developed a training program for all our techs. I play a big role in customer relations. I work alongside MME, our parent company’s ops manager, to help with the workflow of all equipment, and definitely still turn wrenches on high-level repairs,” he says.

He first learned equipment repair while serving in the military.

“The majority of my family was in the military under a Combat MOS (Military Occupational Specialty). They all recommended I join under a Medical MOS. I researched medical jobs and came across biomedical equipment repair. Since I am not a huge fan of blood and guts, but I could turn a wrench, I decided to check that one out,” he says. One of his colleagues says that he is known as their biomed guru — he knows the ins and outs of defibrillators and is always willing to go the extra mile to help out a customer.

“I did have a specialized program. After basic training, I went to advanced individual training for a 50-week course in biomedical equipment repair at Sheppard Air Force Base in Wichita Falls, Texas and received my diploma from the Department of Defense Biomedical Equipment Maintenance Technician Training Course,” Davidson says.

Before taking his current position with ReNew, Davidson gained experience as an Army biomed, a field service technician for OrthoClinical Diagnostics and a BMET at Cookeville Regional Hospital. 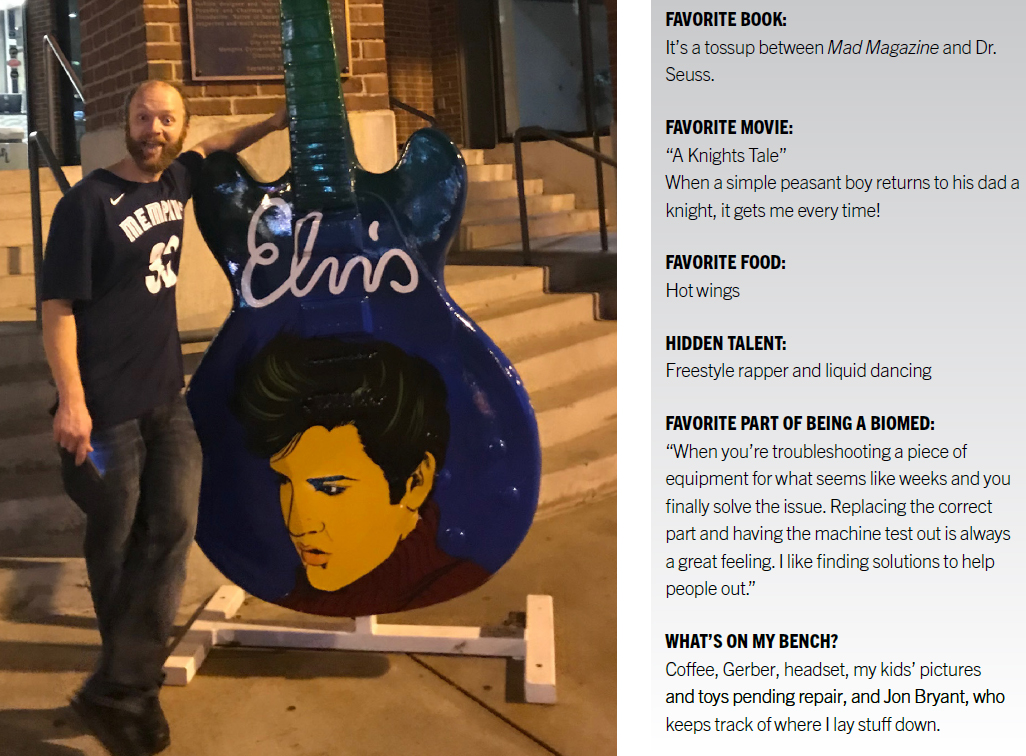 Learning Every Year in Biomed

Working in biomed for 14 has provided a number of challenges.

“In my five years at Fort Hood, we removed and reinstalled all new equipment in five different dental clinics, which was around 500 wired and plumbed chairs,” Davidson says.

“Those things are a total nightmare. We also removed and replaced X-ray equipment, sterilizers, and all the small equipment you see in a dental clinic. It’s a time-consuming and logistically driven task,” he adds. “My next challenge was as director of ReNew Biomedical. We faced the challenge of taking a new third-party company, who serviced medical equipment, and stepped up our game to be an ISO-certified company that provides the same level of service that you get from the original manufacturers. I’ve learned that a lot of companies perform electrical safety test only and simply place stickers on units; we’ve come to call them sticker companies,” Davidson says.

Davidson has also learned that experience can be the best teacher. He has had to troubleshoot all models of defibrillators including Zoll, Physio Control and Philips.

“I had performed preventative maintenance on these models but had few repairs under my belt. I practically spent the first year disassembling and reassembling and learning the parts that failed on all of these models. And the parts that were delicate and needed to be handled with care during the repair and have now provided this knowledge to my staff and continue to learn new things about these models four years later,” Davidson says.

Davidson is also an officer with a biomed association. He is anxious to see the group prosper.

“As the vice president of the Midsouth Biomed Association, I am responsible for finding vendors, guest speakers and providing that information to the president. It has been a struggle to spark interest in the members which has made it hard to get vendors because I want it to be worth it for the vendors. It is definitely a work in progress and the website needs to be updated ASAP. I have only been a member for about 18 months,” he says.

On the home front, Davidson enjoys spending time with family.

“I have a big family. The driving force behind my success is my beautiful wife, Shawna, my oldest son, Nathan, my sweet girls, Callista and Kelsi, and my two wild baby boys; Nolan and Tolliver.

Football and beekeeping are among Davidson’s favorite pastimes.

“I love anything outdoors and if you know me I consider myself the best beekeeper in the business. I’m also an avid Tennessee football fan,” he says. He has been recognized for his efforts both in the military and as a civilian.

“I have received the Army Commendation Medal for serving as the Senior Medical Maintenance NCO during Operation Enduring Freedom in Afghanistan, the Achievement Medal for Leader of the Decon Team, Soldier of the Month, Soldier of the Fourth Quarter, Certificate of Achievement for support of the renovation and re-establishment of the Billy Johnson Dental Clinic at Ft. Hood, and my proudest award to date is ReNew Biomedical Biomed of the Year.”

Some of those awards reflect how Davidson describes himself as driven and ambitious. He also says that he stands behind every decision he makes 100 percent.

It is an attitude that serves his employer, customers, family and a biomed association.