Professional of the Month Raymond Forsell, CCE: Answering the Call

Posted By: K. Richard Douglason: July 01, 2020In: Magazine, Professional of the Month, Spotlight 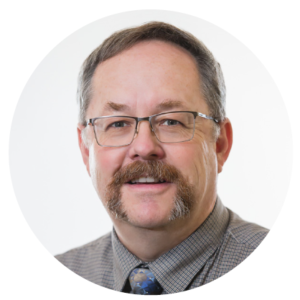 An old English proverb, in an attempt to describe typical weather patterns during the month, states that March comes in like a lion and goes out like a lamb.

For the United States, March of 2020 would require reversing the order and applying the phrase to daily life and not weather. That is how the month will be remembered in the history books.

It was also a time when individuals with the fortitude to operate under crisis conditions were able to rise to the occasion and make a difference. It comes as no surprise that a resourceful HTM professional would step up to the plate and accept this responsibility.

Raymond Forsell, CCE, a clinical engineer with the University of Vermont Technical Services Partnership, provides consultation services to every New Hampshire and Vermont hospital except the University of Vermont Medical Center. Forsell’s background as an EMS captain and Lieutenant Colonel in the Vermont State Guard help make him uniquely qualified in times of emergency.

The coronavirus pandemic and the resulting numbers of COVID-19 patients that have required emergent treatment have tested health care resources in every state.

The governor’s office in the state of Vermont had an urgent need to respond in the early days of the pandemic. Forsell and a colleague answered the call.

“Throughout Ray’s career he has, with true dedication, thoughtfully and professionally applied his engineering and management skills to advance patient and staff safety for the clients the University of Vermont Technical Services Partnership serves. With the COVID-19 crisis, Ray jumped into action to help our clients in the region, and the state of Vermont, prepare,” says Michael Lane, MBA, CMQOE, CHTM, director, University of Vermont Instrumentation and Technical Services.

“His willingness to investigate and lead efforts on the vast array of problems presented by the crisis is a testament to Ray’s character and his emphasis on valuing the safety of others. The University of Vermont-TSP has an incredible team of HTM professionals, and we are continually thankful for Ray’s contributions to the team,” Lane says.

Forsell says that he detoured from his original educational pursuits and found medical device management the right fit.

“I was a mechanical engineering (ME) student, pursuing an ME degree that would have been in the manufacturing/equipment disciplines. I had been involved with my local emergency medical services squad since high school and became aware of increasing technology use in medicine and it was intriguing,” he says.

“The University of Bridgeport had a bachelor’s degree in biomedical engineering, so I transferred to that school. The program included cooperative education in local businesses, and I worked in both medical equipment manufacturing and the clinical engineering department at Norwalk Hospital. Working in hospitals with equipment and clinical delivery of care was rewarding and challenging,” Forsell says.

He says that he started out as a BMET II after college. He split his time between serving two hospitals in Vermont and one in upstate New York. He was also working in the open-heart surgery group at the Medical Center Hospital of Vermont.

“My employer, through this and most of my whole career, has been the University of Vermont (UVM) Technical Services Partnership (TSP), an academic, non-profit shared service clinical engineering provider in New England,” Forsell says.

He says that at UVM, he became a clinical engineer and began providing engineering consultation services to 22 hospitals in Vermont and New York.

“I went to Connecticut and was the assistant director of biomedical engineering at Bridgeport Hospital in the early 1990s before returning to Vermont. Back in Vermont, we expanded the footprint and scope of CE services and now serve hospitals in Vermont, New Hampshire, New York and Maine. I earned my professional engineering license in fire protection engineering, which has helped in areas of code and standards,” Forsell says. 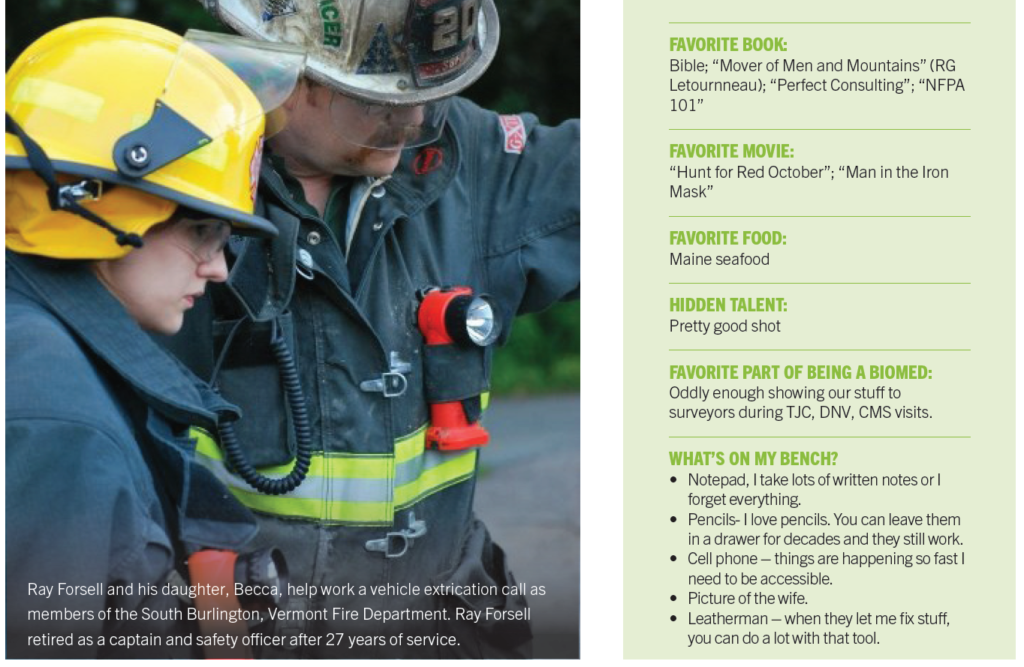 Forsell and his colleagues have proven instrumental in addressing many of the challenges the coronavirus pandemic has brought to his state.

“The COVID emergency has been a wild ride. Prior to the declaration of an emergency in Vermont on March 13, I had kept marginally involved with the Vermont Health Care Emergency Preparedness Coalition, a group of all the hospitals and the state emergency preparedness team. I always offered that if there were any emergencies that required medical equipment involvement, call us since we took care of most of the equipment in the state,” Forsell says.

He says that he got a call from the Emergency Operations Center after Gov. Phil Scott declared an emergency. Forsell explains that they wanted to buy ventilators and wanted makes, models and vendors in an hour.

“I engaged the other skilled clinical engineers at TSP and within the time allotted we had the information to the EOC. We aligned ourselves to be the receiver for 400+ ventilators purchased, so we could get them inventoried, tested and ready for deployment statewide. Our office location is strategic with access to the largest hospital, interstate and helispot. Data from our HEMS CMMS has been critical to providing inventory information to the state EOC on numerous occasions,” Forsell says.

“We have also been very involved in evaluation and promotion of innovative ways to disinfect N95 respirators. Where does CE end? I do not know. We happened to have the technical abilities to evaluate current technologies such as UV-C, hydrogen peroxide and other technologies to mitigate the shortage of N95 respirators. In our state, Steris and Sterrad H2O2 sterilization was the best answer, and testing was done to evaluate filtration effectiveness to 20 cycles for some respirators,” Forsell adds.

“We also modified the application of an existing particle counter to help us evaluate materials for alternate surgical mask and isolation gown usage,” he says.

Forsell says that Vermonters are nothing if not innovative and giving.

“Teams of locals were ready and willing to sew masks. Guidance from UVM and UVMMC helped them to choose materials which were safe and effective,” he adds.

Forsell explains that in his department, there are research engineers and clinical engineers working to develop low-cost ventilators under the FDA Emergency Use Authorization.

“While the emergency may have peaked for now, these innovations will not be lost for future use or in off ‘grid’ locations near and far,” he says.

Forsell says that most of what he has been doing is putting different people together with ideas and resources.

“During late March, TSP began to run a weekly web meeting that has been open to Vermont Healthcare Engineering Society members as well as our client hospitals in Vermont, New Hampshire, New York and Maine. This has been a forum to share best practice in terms of technical challenges to COVID-19 preparation. This has included ventilators, monitors, medical equipment procurement, CMS waivers, negative pressure rooms, PPE, oxygen connectors and supply, and now recovery to normal,” he says.

Forsell says that the whole team at UVM Technical Services Partnership has been unbelievably creative and supportive of him, each other, client hospitals, the states they serve in and all patients.

“With little or no notice, our whole leadership and team changed staffing focus while at the same time supporting regular care and service and daunting requests by the hospitals and state governments. Monitoring systems were moved into makeshift negative pressure wings, testing locations supported with equipment, surge hospitals supported with monitors and equipment. It has been clinical engineering/biomedical engineering/healthcare technology management’s gallant hours,” Forsell says.

Forsell has had varied experiences leading up to his current role; all of which have been beneficial in expanding his HTM and consultation duties in recent months.

“Having left EMS in Connecticut, I joined one of the busiest fire departments in Vermont and served 27 years before retiring as captain and safety officer. In the early 2000s, I joined the Vermont State Guard and have worked my way up to lieutenant colonel and presently serve as the G-3, director of training and operations for the state,” he says. 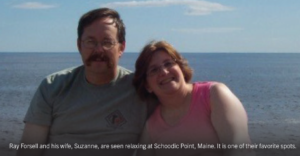 When away from work, his attention turns to family.

“I love to camp with my family in Maine and doing family things with my four kids, wife, and grandchildren,” Forsell says.

“I have been married to Suzanne since 1986 and have four children. Three girls and one boy. Most are in health care or public safety with one a very creative artist. Two boy grandchildren so far will carry on the family name into the future,” Forsell adds.

The efforts during this crisis have been noticed by leadership.

“Ray has always shown rapid action and expert decision making when an emergent situation arises. His work related to the COVID-19 pandemic clearly brought out these traits, and he has been immensely valuable to Vermont and our regional health care institutions,” says Tobey Clark, MSEE, CCE, CHTM, FACCE, engineering supervisor and co-director, WHO Collaborating Center for HTM, University of Vermont Instrumentation and Technical Services.

Forsell says that one of the biggest career challenges is to remain relevant to his clients; the facilities that are members of the UVM-TSP family.

“The primary outcomes to our clients of clinical engineering/biomedical engineering/healthcare technology management have not really changed in my 35 years: Improve the quality of patient care; reduce risk; and contain the cost of health care,” Forsell says.

“Because of the changes, we have to always be recreating ourselves and looking for the needs to fill,” Forsell says.

“As a profession, CE/BE/HTM is unique in health care. I am so proud of the technicians, engineers, managers and support staff that make up our and other departments. They interpret technology to the non-technical. Systems that are mission and life critical are prioritized and supported like little SWAT teams. The workshops may look like a bomb went off in them, however, the thousands of devices that the average HTM member manages is mind boggling. Most are T-shaped people. Broad competence with many manufacturers and types of devices, but with some deep specialty. If you subtract the equipment that HTM professionals support, medicine is basically a loincloth and a machete,” Forsell says.

“So much has changed in 35 years in HTM. So much is the same. Stick to the basics. Listen to your client. Seek to effect the outcomes your client thinks are important: patient care; risk reduction; cost containment; innovate whenever possible,” he says.

Have there been awards worth mentioning? Forsell says that the opportunity to serve in many roles has been reward enough.