Posted By: K. Richard Douglason: May 01, 2017In: Magazine, Professional of the Month, Spotlight 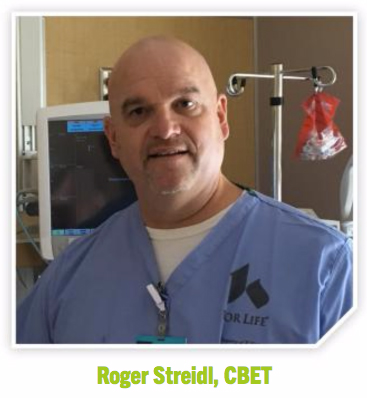 Just outside of Dayton, Ohio is the suburban community of Beavercreek. It is the largest city in Greene County and offers a cross section of shopping, restaurants and recreation.

The health care needs of the area are served through the Indu and Raj Soin Medical Center, which opened its doors to patients in 2012 and is part of the Kettering Health Network.

Roger Streidl, CBET, is a biomedical equipment specialist at the Soin Medical Center in the facility’s biomedical engineering department.

“I had a family friend that went through the biomedical electronics program at Kettering College, and it sounded very interesting to me,” he says. “I was interested in something in the medical field and I thought it would be interesting and challenging to work on medical equipment.”

He attended Kettering College of Medical Arts in Kettering, Ohio right after graduating from high school in 1983 and graduated from the Kettering program in 1985.

“The last semester of college was clinical time spent at different hospitals in the Dayton area, and one of them was at St. Elizabeth which was a 600-bed hospital. They had an opening, and they hired me as soon as I completed the last semester,” Streidl says. “I worked there for 15 years until the hospital closed in 2000, and I had worked my way up to department manager at that point. I was contracted to help liquidate the medical equipment which took over a year.”

Beyond that initial biomed training at Kettering College, Streidl has invested extensive time in training and keeping up-to-date on industry practices.

“I worked for a year for Anderson Medical, [in] Milford, Ohio, which was a company that bought and sold used equipment and offered biomed services to surgical centers and other outpatient centers. I spent three years working for Signature Medical in Dayton, Ohio, whose primary service was servicing sterilization equipment, but with my biomed background, they could offer biomed service to outpatient centers,” Streidl adds.

In 2005, Streidl moved back into the hospital environment and started working at Grandview Hospital in Dayton, Ohio, which was part of the Kettering Health Network.

“In 2011, I transferred to a new hospital in our network that was just getting ready to open, Soin Medical Center, which is where I currently work,” he says.

“I feel fortunate that my employer has invested in training me for all these devices, but at the same time I feel that it has saved them money in the long run,” Streidl says.

Building Up and Taking Apart

Asked about challenges on the job, Streidl reflects on the large task of closing and opening a facility.

“It was kind of a ying and yang situation to close down a hospital and then be responsible to open one up,” he says. “Especially in today’s EMR connectivity environment, and then being part of a seven-hospital network and tying into existing systems, it was a big project to get off the ground.”

When Streidl was faced with opening the new facility, he was the only biomed onsite. Department managers were not available prior to the opening which left him without a decision maker to consult.

“There was a limited time frame to get the equipment unboxed, inventoried, inspected, configured and ready for use,” Streidl recounts. “Some of the equipment was installed by the OEM vendors, but there was still time spent scheduling it and taking care of all the logistics once they were onsite. Imaging equipment needed PACS and network information configured, or passed along to the OEM reps to configure it. Applications training on the equipment for the staff had to be coordinated, which I assisted with,” he adds.

“Once we opened, even though the staff had gone through applications training, there was definitely a learning curve with the equipment. There were staff from all different backgrounds and there were no ‘experts’ in the units as you would typically find in an existing hospital. So, there was a lot of clinical support that needed to be provided early on with the equipment,” he adds.

On the flip side, shutting down a hospital was another project that proved to be a challenge. The hospital was a 600-bed, 1 million square foot facility.

“I was contracted by a liquidation company. Initially I gave tours to buyers that would prospectively buy the equipment as a lot, so there was a lot of walking,” Streidl says “The challenges were a lot of buyers wanted to cherry pick the high-end items that could easily be resold, but the more common or older equipment was harder to sell.”

“What eventually ended up happening was a local hospital bought the majority of the equipment that hadn’t been sold and a used medical equipment remarketing company then came in and sold off the remainder. I was involved with the process for over a year, and the process was still ongoing when I left. It was hard to see a facility, that you worked at for 15 years, be picked to the bone,” Streidl adds. 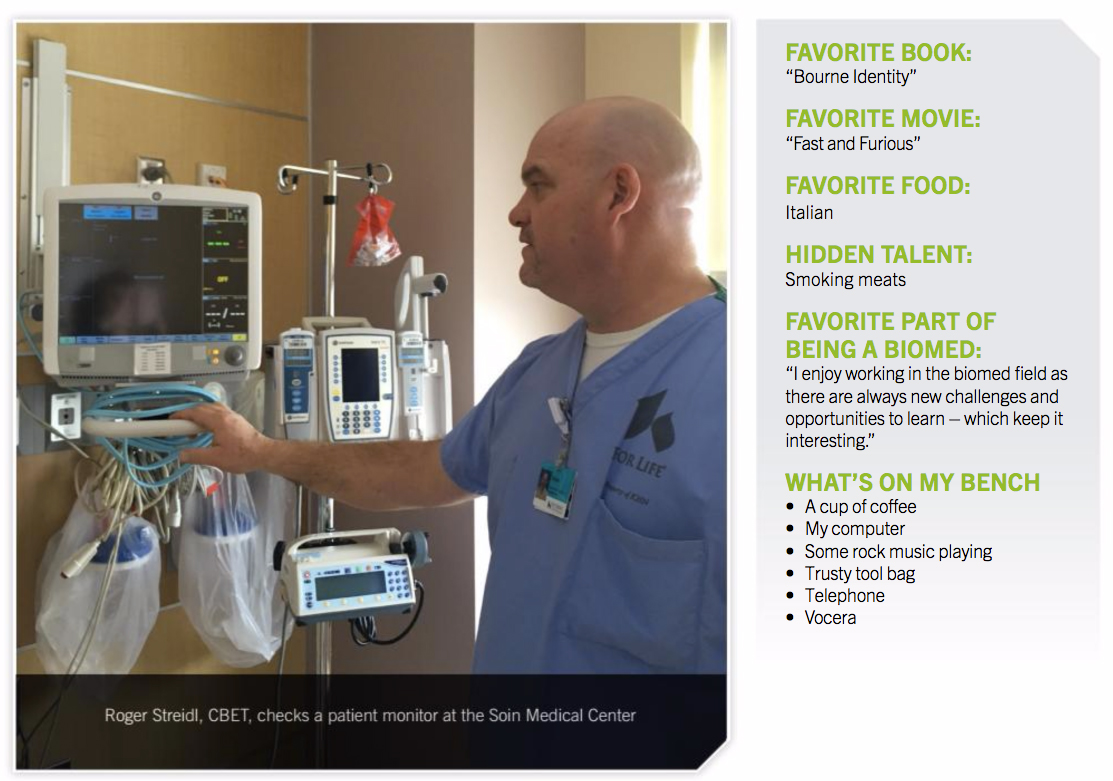 Off the job, Streidl enjoys some of the simpler things in life.

“I enjoy anything to do with cars, especially my 1995 Toyota Supra; working with our horses and hiking,” he says. “I have two children, Seth and Shelby, and my significant other; Kim.”

Like so many biomeds, Streidl is dedicated to his profession and his role in the hospital.

“I’m very passionate about my job and enjoy working in the hospital environment. I take pride in the work that I do and take every effort to represent the biomedical engineering department in a positive way every day,” he says.