Posted By: K. Richard Douglason: August 01, 2019In: Magazine, Professional of the Month, Spotlight

The three-member HTM staff is on-call 24 hours a day as needed and includes two techs and a manager. They handle everything at the medical campus from televisions to life-saving medical equipment. One of the clinical engineering department’s techs is Vincent Sumarkoff, BMET II.

Sumarkoff got his training initially as a mechanic repairing motorcycles. Eventually, he became a factory trained, registered BMW and Honda technician. He spent 26 years in this profession before making a career change at age 49.

“I started in the motorcycle business in 1986 after being discharged from the USMC. I worked at a multitude of salvage yards and dealerships for decades as a line technician; BMW, Honda, Yamaha, Kawasaki, Suzuki, Polaris, Ducati. In 2008, I opened my own motorcycle repair shop called ‘ACE Motosports,’ ” Sumarkoff says.

It was at this point that Sumarkoff discovered that he was eligible for vocational rehab through the V.A. He closed his shop to pursue a college education. 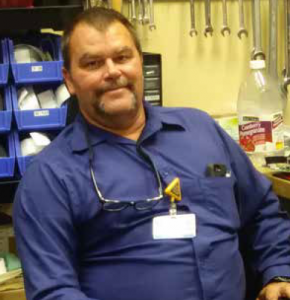 “I was inspired to cultivate a new career path thanks to the Veterans Administration. I am a Marine veteran. Because of an active duty incident, I qualified for vocational rehabilitation services administered by the V.A. Because of my technically skilled background knowledge in mechanical and electrical service engineering and repair, the V.A. referred me to HTM biomedical/clinical engineering education and training at a community college program,” Sumarkoff says.

“My education was completed at Tulsa Community College in Oklahoma,” he says.

He earned an associate of applied sciences degree in biomedical equipment technology in December of 2013. He also received a certificate of achievement in electronics technology that year.

“My initial employment as a new biomed was with an independent service organization where I was on the road constantly as a field service technician doing PMs and field repairs on a variety of equipment. It was a genuine experience because I never knew where I was going to be from one day to the next,” Sumarkoff says.

“For instance, there were days when I was called out to service an autoclave at a tattoo shop, or service a dental hygiene machine at the city zoo. Most of my calls were at hospitals and outpatient clinics, nevertheless, I was eager to learn about a new patient care device that I had never seen or worked on, and I always welcomed and endured a new technical challenge,” he adds.

He says that he has seen quite the array of old and new medical equipment, most of which he had to do service and repairs on.

“I must say, the most unique device I have been trained on to service is the UV technology disinfection robots that XENEX has manufactured. These devices are not technically ‘robots,’ but because of the way they resemble a certain Star Wars character, the common name for this device is ‘R2D2,’” Sumarkoff says. 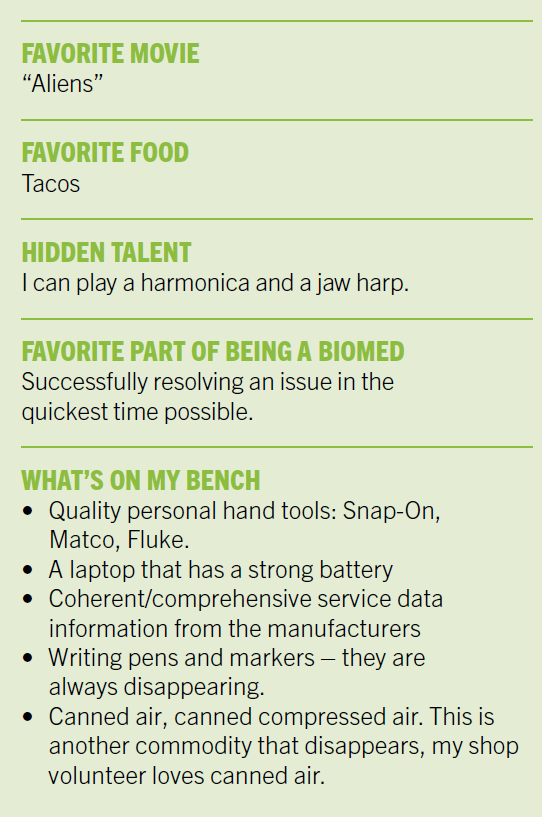 Working in the field proved to be a learning experience, but Sumarkoff has found that an in-house biomed position has its rewards.

“So, I must say, I really enjoy my new career as a staff biomed. I still get to use my hands and my favorite tools as necessary. It’s nice going to the same place for work every day. I appreciate the rapport that I have with my fellow staff members and am honored to be among some of the finest people in the health care industry. I appreciate the knowledge that these people share with me as I continue to grow and develop my career,” he says.

Sumarkoff says that he does find himself spending a lot more time at the computer these days due to the duty requirements that he is responsible for. “FDA, NFPA; it’s all about data entry,” he says.

“I also attend more meetings and other redundant corporate protocol engagements. I’m at my best when I’m diagnosing and fixing something that is broken,” he says.

Off hours include adventures that involve turning a wrench and going fast.

“I drive and tune an OEM production-based road race sports car for ‘Saguaro Motorsportz’ at paved road courses where I live in Arizona,” Sumarkoff says.

Going fast on motorcycles and music has also been in Sumarkoff’s past. “I was the 2005 NHRA, division 7, Summit Series Pro Drag Bike motorcycle champion,” he says. “I dabbled in the music industry for a few years producing heavy metal shows.”He says that he has a “huge extended family that live all over the world; mostly in the United States.” Two members of that family are daughters who live in San Diego.

“I am grateful to have two grandchildren in my life. My best friend is my gearhead girlfriend, Tammy,” he adds.

Sumarkoff has also had an eye on science and space travel.

“I am inspired by the future of nano technologies; space rocket technology that is developing these days. I always saw myself as the first generation of biomeds on the moon or Mars which will happen sooner or later in the future. Unfortunately, I am unable to pass the astronaut physical exam,” he says.

Although the moon isn’t in the cards, the investigative aspects of a biomed’s work are always there.

“And then there are those wireless/software problems that pop up at 2 a.m. when I’m ‘on-call.’ My ability to efficiently identify the problem and create an action plan resolution for most service requests is my best skill,” Sumarkoff says.

And, his “best skill” is why this Marine is no longer flying down the dragstrip on two wheels, but making sure that patients can be monitored in the middle of the night.