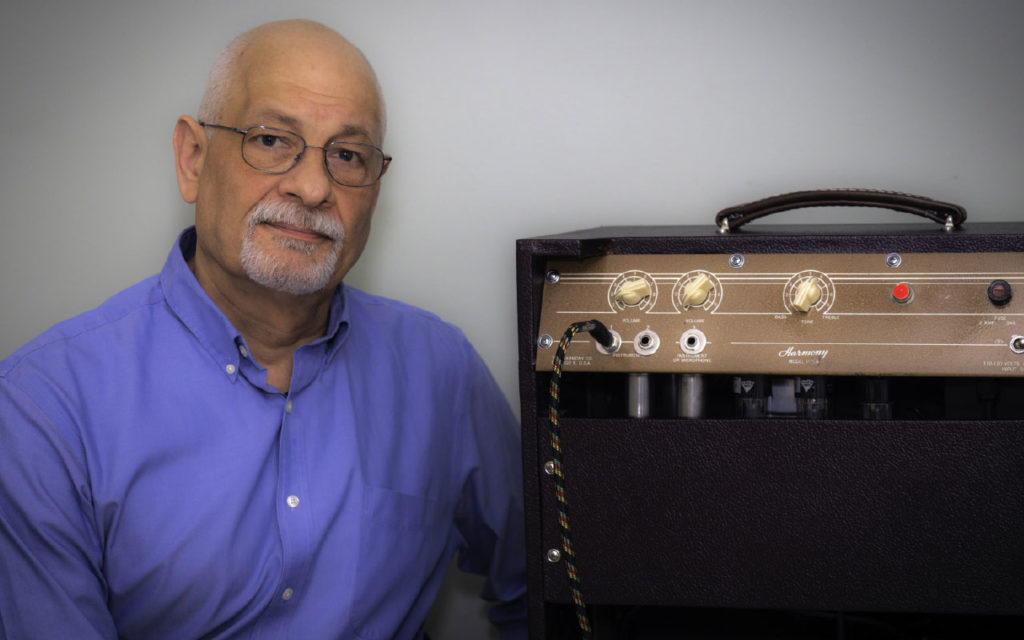 The ability to cauterize a wound and stop the bleeding has been around for more than a thousand years. The first electrical application arrived on the scene prior to the Civil War. The procedure was termed “galvanocautery,” and it involved thin platinum wires that were heated using a battery.

By the 1920s, William T. Bovie introduced an electrosurgical instrument that could be used for coagulation. It was the first of its kind to also have cutting settings. Using higher frequency electric current, it could cut tissue without muscular contraction.

Bovie’s device was used during the 1930s as well. Like radios of the day, it offered much more in aesthetics than modern-day medical instruments.

That may be one reason that Joseph Beaudoin, CBET, a senior biomedical technician in the Trinity Health clinical engineering department has it on his project list.

Beaudoin has had an interest in electronics that goes back decades and that life-long interest has inspired a creative hobby.

“My interest in electronics began in the summer of 1973. I was 12 years old and Dad just bought a new 19-inch black-and-white television for the living room. Dad had enough of the old 25-inch Zenith console shutting down during Gunsmoke. It was moved to the basement, awaiting a trip to the landfill,” Beaudoin remembers.

“I decided to take a look inside the old television to see what made it work. I noticed that one of the tubes was not glowing. It was a 5U4 rectifier tube. A trip to the store and I had my own television to watch what I wanted,” he says.

Beaudoin says that his dad was so impressed that he told his friends at work.

“One of his friends sent him home with a bag of Popular Electronics and Amateur Radio magazines. I was hooked. Dad got me a meter and soldering iron at Radio Shack. I was in business at 12 years old.

He says that in the summer of 1974, Dad’s friend from work sadly passed away. His wife asked Beaudoin’s father if his son might be interested in some of his old electronics stuff.

“Dad and I went to visit and when we left, the back of the truck was filled from top to bottom – cab to tailgate with electronics. I set up shop in the basement,” he says.

Beaudoin picked up soldering and testing by the ninth grade as well as taking metal shop. With that experience, he was able to fabricate a service fixture to hold the turntable assemblies found in console stereo systems.

“By the summer of 1975, word had gotten out and I was getting many requests for service. At my busiest I had 10 televisions in my basement shop. Dad was so proud of my success, he bought me a Heathkit 5Mhz oscilloscope, a Heathkit Vacuum Tube Tester with roll chart and an RF signal generator. All in kit form,” Beaudoin says.

There were also special projects like powers supplies for CBs and modifying a Magnavox console stereo to be used as a guitar amplifier. Beaudoin loved working in his basement shop.

“In 1977, enrolled in the radio/television electronics program in vocational school, I would spend all my free time at high school in the library pouring over the reviews and specifications in magazines like High Fidelity and Audio. Audio had become a passion of mine and I viewed audiophile equipment not only as high quality but also an artistic statement. I wanted out of the consumer electronics business and thought my best chance to work with quality technology was to work in broadcasting and recording,” Beaudoin says.

In 1979, Beaudoin enlisted in the Army as a radio and television systems broadcast technician.

“After training in broadcasting, I was stationed at Fort Benning and worked as a bench and field technician servicing both commercial and consumer electronics. I also worked in the evening as a service technician for World Wide Stereo,” he says.

In 1982, he was transferred to Southern European Broadcasting in Vicenza, Italy. This assignment allowed him to focus on his interest in high-end audio and video systems.

“I have refurbished many old anesthesia vaporizers into desk lamps. The insides are removed and just the shell is used. I have also installed touch sensors. I have sold a few and gave away some. New technology does not carry the same aesthetic quality as these old pieces,” he says.

“The unit has been completely disassembled and each component cleaned and restored. The most difficult part of the project is the work involved in restoring the veneered cabinet,” he says.

He says that building and troubleshooting vacuum tube guitar amplifiers is very enjoyable and borders on art rather that science.

“The tubes that are manufactured today have characteristics that are reviewed much like one may review a bottle of wine,” Beaudoin explains.

“What interests me the most in projects like vacuum tube amplifiers is that much of the technology used is classic. The knowledge I have acquired over the years is still very relevant,” Beaudoin adds.

He says that many boutique shops get top dollar for hand-wired high-quality guitar amplifiers. Whereas in computer-based technology, the technology becomes obsolete before the hardware has failed.

“When I plug a guitar in to my amp, there is no boot-up there are no software upgrades or applications to update. Just raw power,” Beaudoin says.

“In 2001, I was tasked with learning renal dialysis and water treatment. In an effort to accelerate the process, I installed a 2,000-gallon koi pond in my backyard. I have both mechanical and biological filtering and ultraviolet clarification. I monitor water quality and add chemicals as needed. Very helpful in learning about water treatment,” Beaudoin says.

When not tinkering with vacuum tubes and veneer cabinets, Beaudoin can be found at Sunnyview Rehabilitation Hospital in Schenectady, New York. This year marks his 25th year in biomed.

“I started in 1996 at Glens Falls Hospital. Most of my experience is supporting surgical services, respiratory care, patient monitoring and renal dialysis. This past September, I made the move from a surgical care environment to Sunnyview. The move allowed me the opportunity to learn a new specialty and perspective on health care,” Beaudoin says.

He says that working in a rehabilitation hospital has been an interesting change.

“There is a wide selection of equipment in physical therapy that I service and maintain. There is basic foundational equipment like lifts, scales, treadmills, bikes and therapy beds. Then there are the more complex systems like ultrasounds, rewalk robotics and patient monitoring. I also continue to provide support to the team with respiratory and anesthesia accountability,” Beaudoin says.

What started as a blown rectifier tube in a 25-inch TV has grown into an interesting hobby aligned with a lengthy career with a wealth of knowledge accumulated along the way.