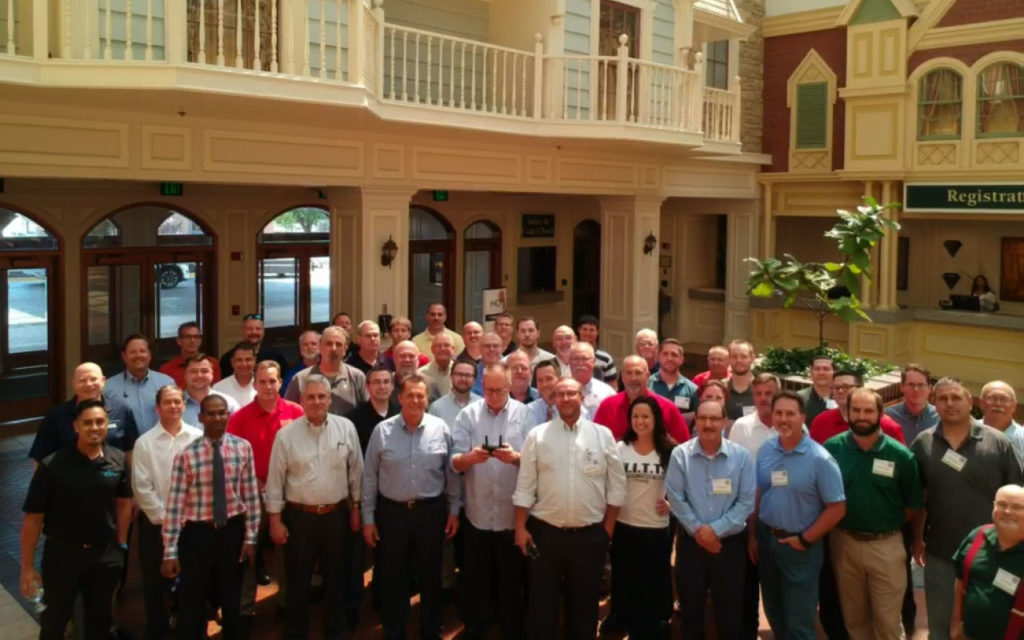 Members of the Heartland Biomedical Association are seen after the 2019 annual symposium.

The Midwest is often referred to as the breadbasket of America because Midwestern farmers grow a lot of the wheat used to make bread. This is the part of the country that includes the Great Plains. States in this region include Nebraska, Kansas, Iowa, the Dakotas, most of Oklahoma and portions of other states. Kansas is the nation’s leading wheat producing state.

Often referred to as “fly-over country,” this part of America is a source for canola, corn, soybeans and barley. Once called the great American desert, the region is also a major source for livestock.

Such a large swath of the country requires a number of health care facilities and, by extension, HTM professionals. With the vast tracts of open land between cities and towns, those HTM professionals have to find a way to network and maintain relationships with their counterparts.

The Heartland Biomedical Association (HBA) helps these HTM professionals stay connected. It holds many of its events and activities in the Omaha, Nebraska area. The association has had members who have come from Iowa, Kansas, Missouri, Nebraska and South Dakota.

The association has been in existence for 26 years. It is officially an IRS section 501(c)(3) organization.

Ostrand says the first meeting was held in 1994 to begin work on its bylaws and elect the first officers.

Back at that time, Ostrand says Dale Rose and Paul Straub played key roles in starting the group.

Ostrand says that the HBA started with a handful of managers and techs in a reserved meeting room where they developed the bylaws and determined the meeting formats.

“Originally, we held meetings according to Robert’s Rules, but over time we felt a more casual meeting environment would be better attended. Some of the first official meetings were presentations of new equipment and their clinical uses. We relied on our relationships within the hospital and received education on clinical aspects of EEG, ophthalmic surgery and other local presenters,” Ostrand says.

Early on, the HBA recruited vendors to teach repair courses on-site for much lower tuition costs. Over the years, it brought in courses on ultrasound, radiology QA, ESU, injectors and more.

“Recently, we have had presenters for new test equipment; we were hosted by Agiliti to understand ISO certification requirements, and have scheduled a presentation on UV sterilization,” Ostrand adds.

The group offers an annual scholarship to local students to foster a relationship with new graduates and job opportunities. The first scholarship was offered in February of 2020.

The year 2020 has been a challenging year for many organizations as meetings and events have had to be cancelled or postponed. The HBA was not spared. It has not been able to have scheduled meetings since March. It was forced to cancel its annual symposium because of the COVID-19 pandemic, but leadership is hopeful that it can host a November meeting.

“We have planned a UV sterilization presentation tentatively,” Ostrand says.

The 2019 symposium was a success and the group is looking forward to 2021.

“This last year, we had about 75 attendees over two days of education and vendor fair with another 60 participants in the Saturday golf outing,” Ostrand says.

“One thing we do is on Friday night, after the symposium, we host all of our vendors, presenters and attendees and have dinner at local favorite restaurants as a thank you to everyone’s hard work,” Ostrand says.

“Although this detracts from the overall fundraising efforts, we feel that we have met costs, still have a reserve fund and enough was generated for scholarships. Currently, we are exploring a joint symposium with HTMA-Midwest in Kansas City, Missouri and Gateway Biomedical Association in St. Louis, Missouri to be hosted in Kansas City as part of a HTM Mixer,” Ostrand adds.

Last year’s symposium included courses such as “BMET to Imaging Path,” “Automate, Optimize and Secure your Clinical Network” and “Implementing a Support Strategy for Diagnostic Ultrasound” to name a few.

The HBA holds regular meetings in January, March, May and November in a normal year, with the symposium scheduled for August.

Many biomed associations and societies cultivate relationships with local community and technical colleges to help out students and connect new biomeds with potential employers.

The group was heading in that direction until the pandemic postponed plans.

“That is our next focus. We were invited to a job fair but it was cancelled due to the recent COVID pandemic. We don’t have any local biomedical technical schools, but we are focusing on electronics students who agree to take medical terminology and anatomy courses as electives. We are really trying to recruit and train local talent,” Ostrand says.

The group has also made an attempt to replace retiring baby-boom biomeds with the newest members of the profession.

“We are stepping up efforts at the local level. I’ve begun calling local colleges, asking about job fairs; reaching out. It’s very difficult to find replacement positions, but this is how we have to do it in ‘fly-over’ country. Our new recruits are keeping membership steady,” Ostrand says.

In the heartland of the country, among the wheat fields and farms, there are Midwestern biomeds joined together to achieve great things for the HTM profession. With any luck, 2021 will be a year they return to all congregating once again.