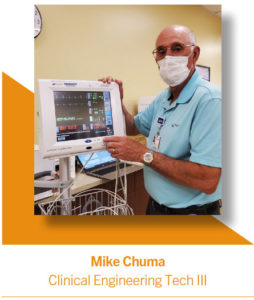 Fifty years ago, I started in the field of biomed in the United States Air Force when it was called medical maintenance with about 400 people in the field. Today, there are an estimated 54,000 biomeds or healthcare technology management professionals. Wow! In 1972, we learned about vacuum tubes. Anyone remember what those are? If not, you can Google it. In the early 1970s, if I remember correctly, we started learning about transistors and then integrated circuits. It signaled quite a change back then. It was like learning a foreign language. We had to really know how to troubleshoot all types of equipment even though some of us did specialize in X-ray (as it was called) along with respiratory and some lab equipment. Over the years, we depended on factory schools for training along with the military and some colleges. At that time, degrees weren’t required. Most of the education came from on-the-job training, that’s how I learned most of what I know. I also attended factory schools.

After the serving in the military, I joined the civilian ranks with ServiceMaster in 1979. It became Aramark, I believe, in 2001. I spent a total of 29 great years there going from technician to manager and management engineer. From there, I spent time with Masterplan as a district manager before going back to serve as a manager with Crest Services and Jannex. Today, I am back with an in-house program as a BMET III and enjoy it.

I believe troubleshooting has changed considerably. Today, because of advances in technology, we swap circuit boards on most repairs. This makes it quicker to get the equipment back to full operation.

I have seen more vocational and community colleges start biomed training programs which has been good for the industry. These institutions, in my mind, have a more practical approach to training, more hands-on. At facilities I managed, we took on interns and placed them with each of our techs so they could at least physically see different types of equipment in a hospital. We also had them perform some PMs and minor repairs with supervision.

I can honestly say that I have had a great career through the years. I have learned through my mistakes and by knowing who to go to for advice.

My recommendations for new techs are the following: