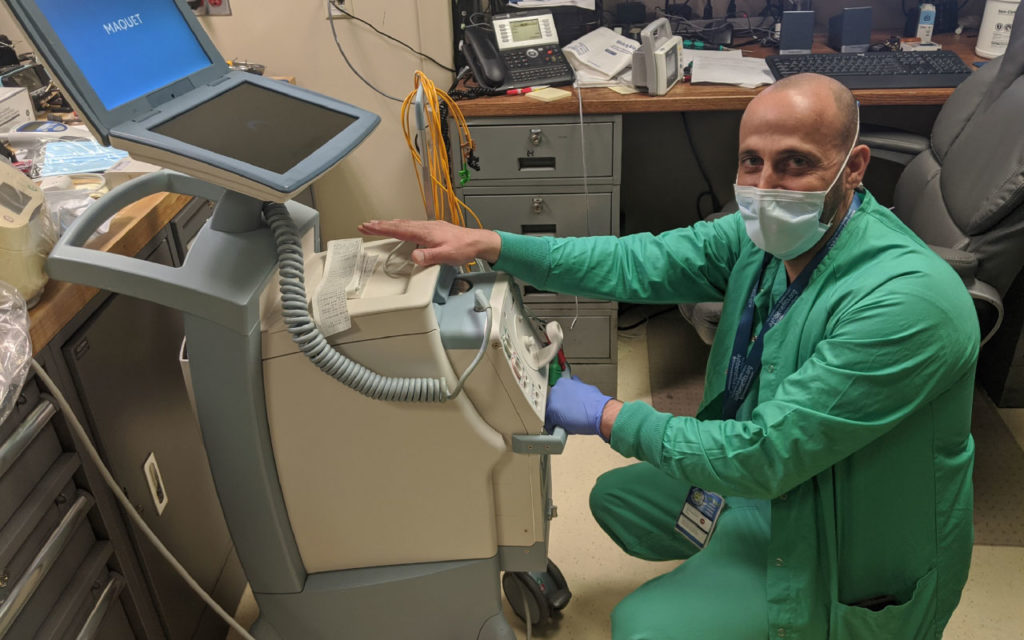 The global cononavirus SARS-CoV2 pandemic and the influx of COVID-19 patients has challenged hospitals and health care systems across the country. The pandemic has also tested the skill sets of healthcare technology management (HTM) professionals and departments as they have supported their clinician colleagues amid these special circumstances.

That call-to-action was experienced by a team of HTM professionals near Chicago, Illinois as Cook County became one of the nation’s hot spots for infections.

“The scope of our department is all clinical equipment support needs, including input on capital purchases and projects involving medical equipment with a top focus on safety,” Czajka says.

Czajka says that each team member brings a specialty to the table.

“I have four people that work in a shop located in the surgery department that primarily focus on servicing surgery and similar departments like endoscopy and PACU. Damian Lesnicki, Jose Hernandez, Tyler Morgan and Bobby Mejia specialize in anesthesia, perfusion and video integration,” he says.

Czajka says that Donohue and Leon specialize in ventilators and service the adult and pediatric respiratory departments in addition to their coordinator roles.

“With a site as large as Christ, we have dozens of Philips PIIC servers for monitoring and telemetry, so there are several techs that are trained to service and configure those systems including Mohammad Hammoudeh. Hammoudeh has also been trained to service our balloon pumps. Colleen Kaufmann’s specialty lies in our children’s hospital and pediatrics departments,” Czajka explains. 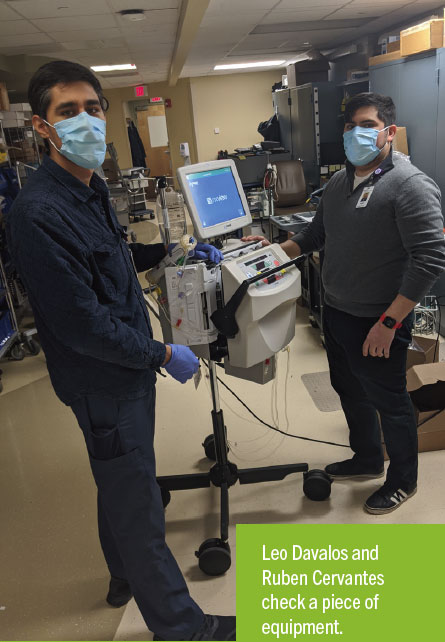 In conjunction with preparing the hospital for an influx of COVID patients, the team also has tackled the big job of transitioning its EMR platform.

“Most recently, HTM has been heavily involved with two major projects – planning for the surge due to COVID-19 and preparing the equipment for our migration from Cerner to Epic as the new electronic medical record system,” Czajka says.

“The COVID surge planning involved redistributing our monitors from non-acute areas to ICUs, effectively doubling our ICU capacity in many areas. As with other hospitals over the past few months, elective and non-urgent procedures were deferred to accommodate the incoming COVID patients and to promote the safety of our team members by social distancing where possible. The HTM team moved dozens of monitors in a very short timeframe to the ICU rooms and configured them on the network so that the patient data flowed seamlessly into the EMR. The speed and accuracy of the team doing that was nothing short of amazing,” Czajka says.

He says that while COVID patients are still prevalent at Christ, they are seeing an encouraging decline, which has allowed the team to focus more efforts on the Epic integration.

“This includes installing devices on the walls in some departments and on some equipment such as ventilators and anesthesia machines that will allow the devices to automatically feed their data into the new EMR. This will mean less manual charting from the clinical staff so that they can spend more time caring for the patients,” Czajka says.

Czajka says that when they began to see a surge in COVID patients that required ventilators, it was quickly discovered that access to the ventilator controls was a pain point for clinicians because they had to don and doff PPE very often to make adjustments.

“We found a way to disconnect the monitor and controls from the ventilator and mount it to an IV pole outside the room, so they could make adjustments without going into a COVID room. This was a big satisfier for the clinical staff and it saved the hospital on PPE usage,” he says.

Czajka also says that during the epidemic, the HTM team was asked by nursing leaders to assist with adding a second bedside monitor to ICU rooms for the surge of COVID patients that they were seeing.

“Because of the Philips licensing restrictions that we experience at Christ, the HTM team had to get creative. That meant we had no bedside sectors for the monitors to land on for patient viewing at the nurse’s station and we had no spare monitors to distribute. Since our outpatient procedures and surgeries were put on hold, we utilized the bedside monitors and licensing from those central stations from the outpatient building to increase our ICU beds in the East Tower building,” Czajka says.

He says that after the ICUs were doubled, they were still seeing an increase of COVID patients.

“We were asked by nursing for more monitoring capabilities. With the help of Philips, HTM corporate, HIT corporate and local HIT we were able to utilize our sister hospital Advocate South Suburban Hospital’s Philips primary server to increase our telemetry capacity in which we added an additional 48 telemetry sectors,” Czajka explains.

“It was then decided, by the state of Illinois, that Advocate Christ Medical Center would be the primary hospital in Illinois to treat COVID ECMO patients,” Czajka adds.

He says that they were then asked by nursing leaders to double up 15 out of the 20 ICU rooms.

“Using the available licensing from our sister hospital, we added a fully functional central station for the staff to view and monitor our patients in the department,” Czajka says.

He says that it would not have been possible without the help of Building Operations, HIT and Clinical Informatics.

Away from the workplace, the team remains active in learning and the HTM community.

“We have a strong presence in the local Clinical Engineering Association of Illinois (CEAI). This organization promotes the HTM field and has members from many of the hospitals in the Chicagoland region,” Czajka says.

Czajka currently serves as the treasurer for the CEAI. He says that the organization holds quarterly chapter meetings and an annual conference at Drury Lane in Oak Brook, Illinois.

During a national health crisis, the HTM team at Advocate Christ Medical Center has shown the resourcefulness and value of a team of biomeds as they assisted clinicians and patients. Their efforts helped save lives, conserve important PPE and protect clinicians. All the while, they were overhauling the EMR platform and integration.

The team has shown that while 2020 is a year of challenges, it is also a year of achievements.