Listed number eight on Forbes magazine’s “Best Places for Business and Careers,” and with a population approaching two million, Indianapolis, Indiana, is a popular city. Education, finance and health care are all major employers in the area. Sporting events and conventions all bring tourists to the area, especially the past few years.

The state of Indiana has more than 300 FDA-registered medical device manufacturers, who employ 20,000 workers. Some of those medical devices remain in the state and are maintained by the Eskenazi Health Biomedical Engineering Department, which provides medical equipment services to the entire Eskenazi Health system.

“Eskenazi Health is one of the leading providers of health care in Central Indiana, with physicians of the Indiana University School of Medicine providing a comprehensive range of primary and specialty care services within our 315-bed hospital and inpatient facilities as well as 11 community health centers located throughout Indianapolis,” according to the system’s website.

Eskenazi Health’s mission has been to serve the vulnerable populations of Marion County.

“The department is independent of IT and reports through the associate vice president of facilities and the hospital COO, however we support many networked systems and have responsibility for medical device integration systems such as middleware products that allow connection to the EMR system,” Royal says.

There is a relationship built between IT and CE via the Lunch and Learn program and regular meetings with the biomed director and IT leadership team.

The department has had its fair share of challenges.

Having the challenges of a new hospital has meant lots of new systems and a corresponding ramping up of the learning curve for the team. There was a lot of brand new equipment in the new facility. The team handled much of this transition before Royal came on board, he says.

“Computer-based training presentations, along with onsite instruction, has not only helped current team members but will be in place for future team members to ensure knowledge is not lost,” Royal says. “There was a large number of retirements after the hospital opened that caused a knowledge drain. The new education system implemented ensures succession planning and raises the knowledge of the department as a whole.”

Royal said moving the hospital’s database was also a big part of the move.

Currently, the team is involved in the planning and implementation of a new electronic medical record system.

“As part of this project, the team will be providing middleware support of the medical device integration which will include all medical devices that have EMR capabilities,” Royal says.

On the training side, the department is hosting CABMET study sessions in association with the Indiana Biomedical Society. In addition to preparing for professional certifications, the team also integrates an educational component into their training.

“Eskenazi Biomedical Engineering holds education as one of its key assets. The department continues to develop education with a relationship with Indiana University-Purdue University Indianapolis (IUPUI),” Royal says. 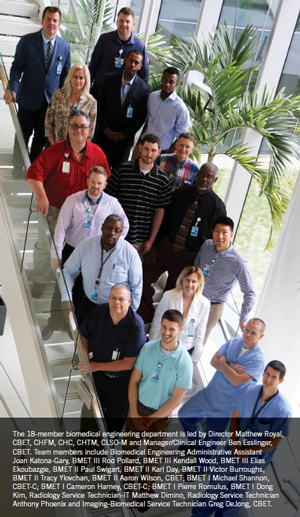 Besides an emphasis on continual education, the group has made time for camaraderie and leisure activities.

“The Biomedical Engineering team also partners with Roudebush VA Hospital, next door, for an annual outing to the ballpark as part of HTM week,” Royal says.

Exposing technicians to a wide variety of repairs offers the opportunity to expand that technician’s skills and experience.

“A process of ‘house-call’ assigns a technician daily that addresses urgent repairs,” Royal explains. “This gives a technician experience in all areas of the hospital and builds new skill sets that normally would be under a specialist. We still utilize a specialist, when needed, but this method fosters a culture of teamwork and teaching.”

“Another daily assignment is the ‘room PM tech.’ The hospital opens up three rooms a day that allows facilities, biomed, and environmental services to make needed repairs. This process also ensures every room is inspected each year,” Royal adds.

“The department also has begun engaging with the IT department on regular educational presentations called ‘Lunch and Learn.’ This interaction builds relationships and knowledge among the two support teams,” he says.

In addition to its more routine duties and special projects, the department is responsible for biomedical device integration and offers other services.

“Other service support provided is to video monitoring of patients with fall risks, infant abduction system and a RFID tracking system for medical devices,” Royal says. “The department also assists leadership with a capital plan for medical devices that includes replacement and upgrades.”

The group remains dedicated to the HTM profession off the job as well. The department has a strong relationship with the Indiana Biomedical Society. Ben Esslinger serves as the current president and Matt Royal serves as treasurer. Royal is also president of the Indiana Society of Healthcare Engineering. Eskenazi Health has hosted IBS and ISHE meetings and is currently hosting CABMET study sessions on behalf of IBS, according to the group. Four of the Eskenazi Health biomed department members recently received their certification.

This innovative biomed team is well positioned to be a model of what the HTM department of the 21st Century should look like.