Posted By: TechNation Development Teamon: April 01, 2022In: Magazine, Professional of the Month, Spotlight 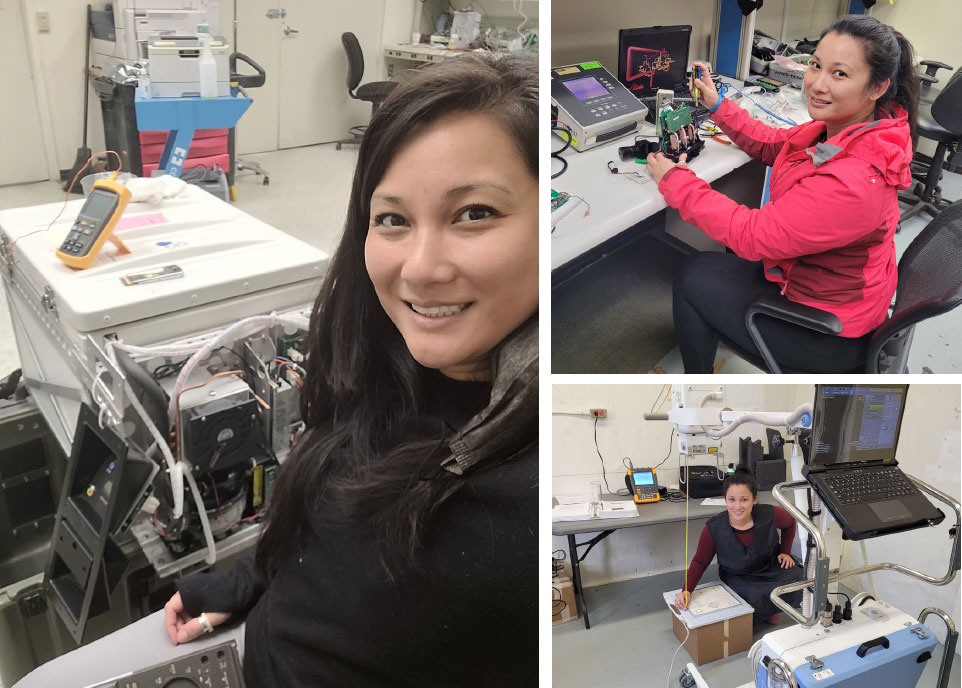 The military has always been a good source for biomed training. It is also a good place to work as a biomed; whether active duty or civilian. There is ample opportunity for hands-on training and experience.

The military owns and operates an enormous amount of medical equipment in the U.S. and around the world. It needs to be maintained and calibrated when in use or when in storage, ready to be deployed.

The U.S. Army Medical Materiel Agency is headquartered at Fort Detrick, Maryland. It has operations worldwide. The Medical Maintenance Operations Division of the command provides medical material maintenance and expertise.

This work is carried out at three depots which cover operations in all 50 states. One can be found at Hill Air Force Base in Utah and another in Tobyhanna, Pennsylvania.

The third is on the West Coast. It is the U.S. Army Medical Materiel Agency’s Medical Maintenance Operations Division at Tracy, California.

All three depots are important to Army readiness and maintenance capabilities for health care operations worldwide.

Tracy, California is east of San Francisco and northeast of San Jose on the east side of the bay in San Joaquin County.

She specializes in mobile X-ray units in her job at the depot.

Fam’s biomed profession started with her working on infusion pumps. That experience was the start of a career path.

“I honestly didn’t know this field existed until I got a call from an employment agency in 2016 to be a contractor for Becton Dickinson working with the Alaris infusion pumps. I found I had a natural talent. I wanted to learn more and do more,” she says.

She left Becton Dickinson in 2019 to go back to school.

“I enrolled in an accelerated program at MiraCosta’s Technology Career Institute in Carlsbad,” Fam says.

Her experience at the institute was immmersive.

“Each cohort (class) gets better than the last one taught. The program at MiraCosta’s TCI is very hands-on. We were able to practice using test equipment. We practiced taking apart and putting devices back together. We learned basic electronics and programmed Arduino projects. I was in cohort 2 and they are now on cohort 8. I recommended this program to one of my friends and he’s now a BMET at Stanford,” Fam says.

“I started my journey as a medical device technician in 2016. Then had a BMET internship during my BMET training. Shortly after receiving my technical certificate, I landed myself in Tracy, California working for the U.S. Army Medical Materiel Agency (USAMMA) at the defense depot. I’ve been here over two years now,” she says.

Fam remembers that a recruiter called her about her current job.

“I think she found my resume on LinkedIn. They also offered relocation assistance and paid for almost everything upfront. My background equipped me with the basics, which is really all you need. If you can read and follow a manual; you can be a BMET,” she says.

“I think the challenge for me was finding my feet when I got to Tracy. I had lived in San Diego with my parents my whole life, so when I moved, it was a culture shock. Everything from the weather to the people,” Fam says.

New experiences and projects always provide an opportunity to learn, whether in the classroom, with on-the-job training or alongside OEM field service engineers. Fam got that opportunity during a project with X-ray units.

“One special project I’ve been involved with was when Canon came to our depot to replace the tube heads of our Soltus 100Ms. I was able to learn from Canon field engineers how to replace a tube head and calibrate them,” Fam says.

She says that the Canon field service engineers tested the tube heads to make sure that they were in fact bad; not giving out the right outputs.

“We tested the power going into the X-ray units were sufficient. Next, we tried doing an auto-calibration of the tube heads which failed. So, we attempted manual calibrations. Those also failed. After Canon determined the tube heads were not deemed for patient use, they showed us how to replace them. We then calibrated them and went through the PM procedure,” Fam says.

She says that fixing a piece of equipment is like solving a puzzle.

“To me it’s very rewarding at the end when the repair is completed,” she says.

Beyond her biomed training, Fam has a bachelor’s degree in English and a teaching credential because she originally wanted to be an English teacher.

“But like many millennials, we weren’t able to find jobs after college and had to settle for whatever came our way. So, I worked a lot of horrible temp jobs in customer service and sales. I’m in my mid-20s. I went back to school to be a nurse and worked at a rehab facility,” Fam says.

One bad experience put her off of that career path.

“Some people have the strength to be doctors and nurses, but that’s when I found out that it was not me. I am so happy I finally found something I’m good at that I actually enjoy doing. And I’m still helping people because the equipment I work on could be used to save someone’s life,” Fam says.

When not working at the depot, Fam enjoys spending time with her two dogs, ballroom dancing and making soap. Helping ascertain that the Army’s medical equipment is maintained, calibrated and working when needed, this biomed is an asset to all who depend on her.