Posted By: TechNation Development Teamon: April 01, 2022In: Department of the Month, Magazine, Spotlight

Not many people know that Atlanta has one of the largest permanent trade centers in the world, with the largest collection of home, gift, area rug and merchandise in the world.

The city, at the crossroads of Interstate 75 and Interstate 85 and encircled by Interstate 285 (a.k.a. the Perimeter) is a fashion hub and home to many professional sports teams. Historically, the city played an important role in the Civil War and the Civil Rights Movement.

With a population approaching 500,000, the need for competent medical facilities across the city is imperative. One of those facilities is the Piedmont Atlanta Hospital.

Managing the medical equipment at the hospital, as well as at the Piedmont Heart Institute (PHI) and Piedmont Medical Care Corporation (PMCC) offices on campus, is the system’s biomedical engineering department. 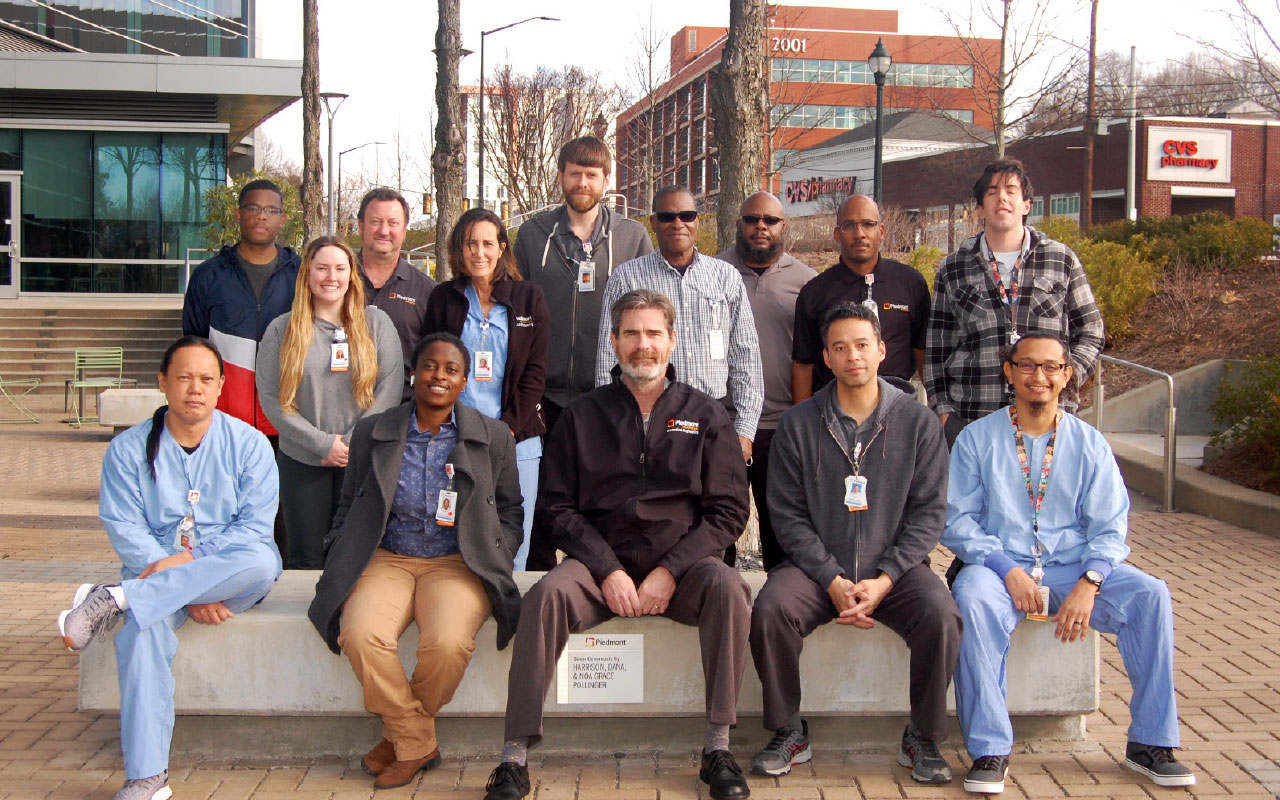 Arnold says that the biomed department provides preventative maintenance, troubleshooting and repair of biomedical devices. They also provide in-service training, as needed, when they find opportunities to better the understanding of the users of biomedical equipment.

“Additionally, we collaborate with clinical departments in pre-purchase reviews and decision making when considering the purchase of new medical equipment. As a system, we seek to standardize biomedical equipment when feasible. In such cases, we involve our biomedical leadership at the system level to aide in negotiations that impact multiple Piedmont facilities,” he adds.

Beyond several team members who have focused areas of assignment, Arnold says that the department works to cross-train where feasible and is constantly exposing technicians to units and biomedical equipment outside of their main scope of responsibility.

With a major recent construction project, the biomed team has been extra busy tackling projects in addition to its more routine duties.

“We are constantly involved in projects at PAH. Over the past two years we have launched multiple units in our new 14-story Marcus Tower that opened in 2020,” Arnold says.

He says, that to date, the team has moved and expanded the following units into the new tower. These projects involved biomed’s engagement with planning, checking in, inventorying, moving and expanding existing services to the new tower, including cardiac intensive care, cardiac acute care, cardiac cath and EP labs, Piedmont Heart Institute surgery suites and the sterile processing department.

The task of biomed departments as problem solvers is often best addressed by avoiding those situations altogether.

“This issue is really around problem avoidance. After moving and expanding our sterile processing department (SPD) into our new Marcus Tower, we knew we had a unique opportunity to start fresh with brand new equipment. Knowing the wear and tear that can occur on equipment in a sterile processing department, we implemented a proactive approach to maintaining the equipment. Instead of waiting for SPD to report troubles, we began performing proactive daily rounding in the department,” Arnold says.

“Our equipment is in use 24x7x365, so it is subject to much wear and tear. Oftentimes, little things break that don’t necessarily impede operation, but left to sit over time, can lead to larger problems. If such issues are left unattended, you can quickly find yourself with an abundance of issues to address and not enough time in the day to address them all,” Arnold says.

He says that the biomed team’s approach is to stay in front of troubles.

“We look for those small things on a daily basis and address them before they grow into larger issues that might negatively impact SPD’s operation. On occasion, we discover issues that, if not addressed, will grow into situations that will diminish the department’s ability to keep pace with their production. These are often ‘behind the scenes’ components that the user would never know was a problem until their sterilizers report an alarm such as low steam pressure or their washers report an alarm such as no water flow,” Arnold adds.

He adds that the Piedmont Atlanta Hospital Biomedical Engineering Department often discovers and repairs issues without the client ever experiencing a negative impact to their operation.

“We pride ourselves on our success at keeping our SPD department running at a high capacity, allowing them to adequately provide surgery with the appropriate instruments on time, which in turn, allows surgery to maintain an on-time schedule. We know patients and their families have had to prepare for surgery both mentally and physically and with that often comes stress and worry,” Arnold says.

He says that the department recognizes the negative impact to the patients and their families when surgeries have to be delayed or cancelled, so they make every effort to keep SPD running smoothly.

In one of the South’s largest cities, the important behind-the-scenes work of medical equipment management is performed every day by the experienced professionals that make up the Piedmont Atlanta Hospital Biomedical Engineering Department.