Posted By: TechNation Development Teamon: March 01, 2022In: Magazine, Professional of the Month, Spotlight 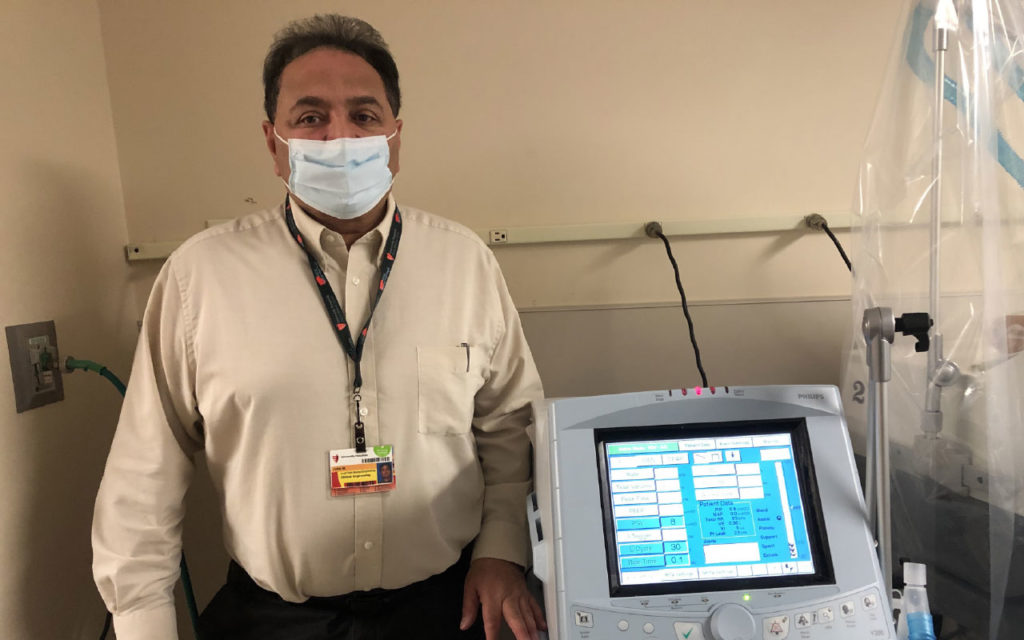 The Y2K concern at the end of the 1990s was characterized as something that could disrupt life as we knew it. The concern was that the internal clocks on computers, medical devices and other electronics would not be able to transition to the year 2000 and the new millennium.

This international concern with a technology bug led one biomed to his first gig.

“I was in the automotive field at the time and visiting a very sick family member at a hospital. A tech walked into the room to check the patient monitor; I remember it was a Spacelabs model. After he left, my family member mentioned that I should get into that field as it’s clean and I’d be good at it,” Mouhanna says.

He says that after a while, he decided to do some research and see if the Healthcare Technology Management (HTM) field was right for him.

“I called Cuyahoga Community College (Tri-C) in Cleveland, Ohio and requested information and course curriculum. I looked over all the courses I would need to take and said to myself; I can do this. I started taking night classes, and as they say, the rest is history,” Mouhanna says.

“After my internship, I shadowed the biomed techs at Parma on my days off from my regular job to gain as much experience as possible. It paid off as I was offered a PRN job and got my foot in the door,” he says.

After he graduated in 1997, Mouhanna stayed in contact with the clinical engineering team at Parma Community Hospital.

“I received a call mid-summer in 1999 from Parma Hospital to help with Y2K testing of clocks on medical devices where I began as a PRN employee,” he says.

“Soon after, I was hired on full time as a biomed one and did that for two years. Job titles began to change and I was moved up to a biomed II level. After 12 years, I left Parma Hospital and took a senior BMET position and lead tech at Elyria Memorial Hospital in Elyria, Ohio. After nine and a half years, I transferred to University Hospitals St. John Medical Center to take on the role of HTM lead tech III,” Mouhanna adds.

In terms of specialization, Mouhanna says that early in his career he focused on critical care and life support equipment.

“I grew along with it and have trained in patient monitoring and telemetry through factory training with OEMs. I also trained in ventilators and anesthesia units with OEMs, so they are my strong points,” he says. 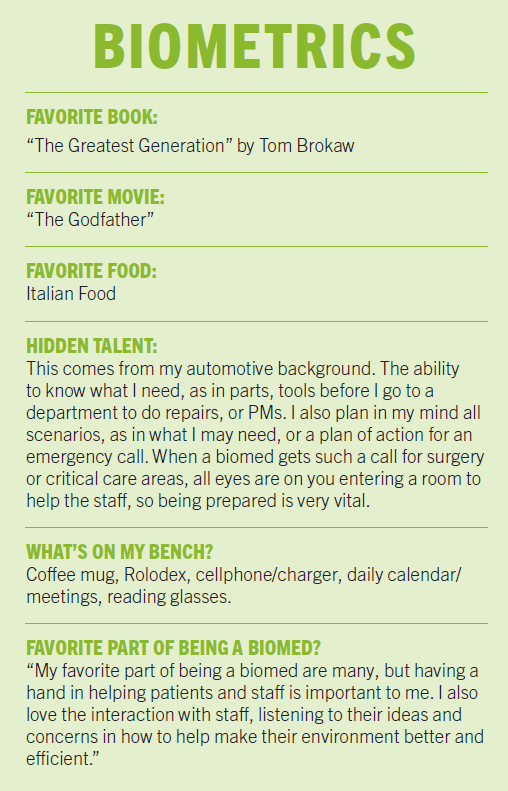 Like most biomeds, Mouhanna has faced some challenges, which often turned out to be a learning experience.

On many occasions he has worked with an OEM removing or installing new patient monitoring devices while patients were being monitored. He says that not having patient care disrupted is vital as well as following infection control guidelines for cleanliness that have to be on a high level.

“On a few occasions, the hospital purchased new anesthesia units and patient monitoring for surgery rooms. Working with the OEM to set up and switch units, without any disruption in surgery cases, I also set up training for anesthesia and surgery staff,” Mouhanna says.

He says that one of his biggest challenges was being involved in surgery room renovations. He worked to get rooms ready for cases while construction was being done on other rooms.

“I worked with IT, facilities, construction crews, vendors and supply to get new rooms equipped and ready for use on a scheduled timeline. I learned so much about rules, regulations, inspections, infection control and all in getting renovated rooms ready for use to start surgery cases,” Mouhanna says.

“I was also part of another great team at University Hospitals Elyria Medical Center; there we were awarded department of the month through TechNation in a February 2021 article,” he adds.

Mouhanna describes himself as a humble person and says that he loves his career and could not see himself doing anything else.

“I feel so fulfilled giving back to my school by helping yearly interns as I was one once. Watching them grow and when internships are complete, it is a pleasure to see them begin their careers. I feel strongly that giving back to your school is something everyone should do,” he says.

In terms of hobbies, Mouhanna says that he has always loved cars. He did once work in the automotive field for 20 years. He says he grew up a huge muscle car lover.

“I enjoy going to drag racing strips and classic car shows. I also love going to shooting ranges as I have a group of friends who share the same interest,” he says.

On the home front, time with family is important.

“I’m very close with my family and they mean the world to me as I spend as much time as possible with them,” Mouhanna says.

Who would have thought that a software bug would have been the entry to a lifelong career? This biomed has made the most of that opportunity and given back to the field that he enjoys.